Did Columbus and Cabot Begin as Partners?

Mr. Boyle is the author of Toward the Setting Sun: Columbus, Cabot, Vespucci and the Race for America (Walker & Co, June 2008) 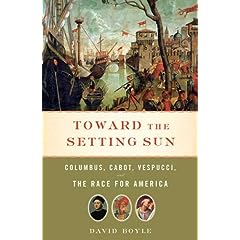 On August 6, 1497, almost precisely five years since Christopher Columbus had first set sail for the New World, his Venetian rival John Cabot navigated his tiny ship Matthew back up the River Avon to the English port of Bristol, and rode at speed to London to give the king the news of his extraordinary discovery on the other side of the Atlantic.  Columbus had failed, he said.  The intelligentsia of Europe believed, as Columbus did, that he had reached China, but Cabot believed he had proved – correctly – that Columbus’s expeditions had actually lodged in some remote islands very far from the Chinese coast he had claimed to have found.  But Cabot claimed much more: that his own expedition, one ship with a crew of less than twenty, had now found the route to China in a very different place, and that Bristol was now set to be the new Venice and Alexandria, all rolled into one.

We know now, of course, that Cabot was right about Columbus but wrong about himself.  We know that his pioneering 1497 voyage was not really a voyage of discovery.  Other races and civilizations occupied the ‘New Founde Land’ he had claimed.  We also know, with the benefit of history, that the voyage led not to spice routes but a staggering exploitation of the cod trade, repeated and pointless exploration for the mythical northwest passage for the next three centuries, and the English claim to North America.

What is less well known is that Cabot’s arrival in London, and his every move afterwards, was being reported to Castile by agents of Columbus, who was then working closely with the first man to correctly interpret the geography of these adventures, Amerigo Vespucci, the man whose name would eventually grace the new continent which hardly anyone had yet imagined.  Cabot knew them both, certainly by reputation, but where history has been quiet until now – if not silent – is how much his voyages were bound up with theirs.

All history involves leaps of imagination.  No matter how contemporary and how certain the facts, there are always holes in our knowledge that historians have to fill with the information they have.  The story of the race for America is no exception.  In fact, the separate tales of Columbus, Cabot and Vespucci have been almost unique in their susceptibility to bizarre theories, generation after generation, as critical maps or documents are alternatively discredited and vindicated.

Was Columbus Jewish?  Was Cabot from the Channel Islands?  Was Vespucci a fraud?  Were they all double-agents?  All these have been claimed by serious researchers within living memory, and the answer is almost certainly not.  But in recent decades, a broad consensus has begun to emerge about the basic facts and documents, thanks to painstaking research and vital new discoveries over the past half century.  Cabot’s debts, Columbus’s religious obsessions, have only become clear recently, and – above all – the three pioneers emerge, not so much as explorers, but first and foremost as merchants.  Their motives may have been glory, but most of all, the enterprise they shared was about the prospect of astonishing profits.

The last few years have also yielded quite unprecedented progress in our understanding of all three men – documented evidence of Columbus’s extraordinary cruelties to his followers, indications of the true achievements of Cabot’s mysterious final voyage, and insights into how Vespucci had reinvented his own story.  All these have added to the consensus, but provided us with more rounded pictures.  Taken together, they mean that it is possible at last to end the artificial divisions in the story which have emerged because separate historians and separate nations, have told their three stories separately.  Their tales have always been separated by those whose self-appointed task has been to fight their corner and rubbish their opponents and their work.

We know that Columbus and Vespucci worked closely together; we know that Cabot and Vespucci had common acquaintances interested in western possibilities. They collaborated, knew of each other’s ambitions and followed each other’s progress.  Columbus and Cabot were also both born around the same time in Genoa and probably knew each other from their earliest lives.  All three were admirers, and two were acquaintances, of the sage of Florence, Paolo dal Pozzo Toscanelli, who first urged explorers to sail West in order to find the East.

Writing the story of all three as one narrative has been, for me, a kind of research.  When you link them together and put the stories in context, it is suddenly obvious – for example – why Cabot went to Mecca or why Vespucci abandoned his career to go to Spain.  The business of profit becomes even more central to the tale than it was before.  The race for America is as much business history as it is diplomatic history.  Above all, it is more accurate.  The race for America was one story, it makes sense when you tell it that way and, when you embark on historical reconstruction, you find an energy and thrust to the story that you never realized was there before.

The key relationship at the heart of this tale, and the one which still remains hazy to historians, is the one between Cabot and Columbus.  Yet the whole thrust of the story implies that the enterprise of the Indies was not originally a separate undertaking, almost identical but happening by coincidence, but a joint project by Cabot and the Columbus brothers, Christopher and Bartholomew, which unraveled.  That was what the historian of exploration David Quinn certainly suggested, but it is impossible to prove.  Even so, their original collaboration now seems by far the most likely interpretation.  Sometimes when you are writing about an era when the sources are so confused or missing, despite the growing certainty of the scholars, all you can hope for is plausible probability.

When an English double agent reported some of the details of Cabot’s historic voyage to his Spanish masters later, he described the plan as “according to the fancy of this Genoese.”  It was Quinn who said that this gave the strong impression in the letter that both voyages – Cabot’s and Columbus’s – had been part of a joint endeavor, by mariners from Genoa.  “Another Genoese like Columbus,” said another informant about Cabot.  There may be an implication that, at some stage, Cabot and the Columbus brothers had been working together to the same end, and if they were, their plan must have begun to take shape around now.

There is other evidence too, none of it absolutely conclusive in itself, but taken together, the coincidences between the lives and plans of these two merchant adventurers are just too close to believe they were independent of each other.  Both were indeed Genoese, probably with connections to the Fregoso party and to the coastal port of Savona.  They were almost exactly the same age.  Their plans for the enterprise of the Indies were almost identical, though Columbus in the end demanded more in return.

But that is not all.  Research over the past few decades in the Venetian archives has also turned up some other connections that are hard to ignore.  Both were involved around the edges of the wool and silk trade from southern Europe to Bristol and London.  Both frequented the same ports, Lisbon and Huelva for Seville, both also frequented by sailors from Bristol with the stories of exploration that must have filtered out of there.  What is more, as it turns out, both ended up so heavily in debt in the mid-1480s that they had to leave their homes with their families and find somewhere else to live.

Most history has some doubts at its heart, no matter how definitively it is written, and this one is certainly no exception.  But what we know about Cabot and Columbus points towards a common position and common plans for the Indies that was more than simply a dream of crossing the Atlantic.  If so, those joint plans must have included working together to raise the money they needed – through one risky but ambitious deal that linked Venice, Lisbon and London, which went horribly wrong.  Indeed, this is probably the missing element of the tale of the race for America – a race where none of the participants had any conception of where they were actually going – and without it, the full story is simply not coherent.

This joint venture must have emerged in snatched conversations in the Genoese community in Lisbon, when Cabot stopped over on his way to Bristol – reminiscing about the extraordinary tides there, the mysterious expeditions and the secret maps.  He and Columbus had not met since they were boys, and it was hard to imagine then how the voyage they both dreamed of might be possible.  They were young and had few enough connections.  But they probably also realized the crucial heart of their plans at this stage: they would need not just backers, but some means by which they could profit from their discoveries.

One option before prospective explorers in those days was to hitch themseles to the plans of a monarch, get an expedition paid for and commissioned by them. The difficulty was that gave them no personal rights over the territory they discovered. They would come back if they succeeded and the monarch would reward them, and that would be the end of the matter for them - they would wait for the monarch's call to go somewhere else, as Vasco da Gama or Bartholomew Dias had to. That was how the Portuguese organised matters. What Columbus and Cabot developed was something different - an agreement with a monarch that, if they succeeded, they would get a cut of all the proceeds of their discovery and other rights.

This explains why Cabot and Columbus ended up so disastrously in debt at the end of that year, why they needed to approach the crowned heads of Europe, and why Cabot made such a dangerous journey to Mecca to investigate the sources of the spice trade in the Far East.

It also goes some way to explaining the ambiguity at the heart of the story of exploration and discovery: if mariners had traveled regularly, if accidentally, to lands on the other side of the Atlantic before, then what was special about Columbus and Cabot?  The answer is that they had cracked the basic problem: how to profit from their enterprise (and that is what it was – not a voyage of discovery -- but an enterprise of enormous ambition).  This was a plan with the dream of fame at its heart, but it was also one that underlines their joint ambition: it was a scheme which, if it worked, would have made them the richest men in the world.

They may not have discovered America in quite the way we have believed.  It was already occupied, after all, and the Vikings, Chinese and Bristol fishermen probably went there first.  But they were, at least, pioneers of Intellectual Property.