The Most Important Moment in American History

Mr. Fleming, the author of more than 40 books, both fiction and non-fiction, was head of the American Center of PEN. His latest book is The Perils of Peace: America's Struggle for Survival After Yorktown. He is a member of HNN's non-profit corporate board. 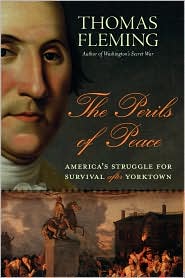 At noon on  December 23, 1783, General George Washington walked to the state house in Annapolis, Md, where the Continental Congress was meeting. Congress had fled from  Philadelphia earlier in the year when a few hundred  soldiers demanding long overdue pay had surrounded Independence Hall.  The solons had wandered first to the village of Princeton, New Jersey and then to this  state capital on  Chesapeake Bay. Their dolorous lack of courage and their total bankruptcy had made the so-called  lawmakers the laughing stock of America  and Europe.

Washington took a designated seat in the assembly chamber, and his two aides sat down beside him. The three soldiers wore their blue and buff Continental Army uniforms. The doors of the assembly room were opened and Maryland's governor and the members of the state's legislature crowded into the room, along with, in the words of one eyewitness, "the principal ladies and gentlemen of the city." Other ladies filled every seat in a small gallery above the chamber.

The President of Congress, Thomas Mifflin of Pennsylvania, began the proceedings: "Sir, the United States in Congress assembled are prepared to receive your communications."   Mifflin was not a name or a face that General Washington was  pleased to see.  During the Valley Forge winter, the former quartermaster general of the army had led a vicious  campaign  to denigrate Washington and humiliate him into resigning.  Mifflin had been supported by not a few members of Congress.

Washington stood up and bowed. The members of Congress briefly took off their hats in response to the general's bow. The rulers of the United States numbered only twenty delegates from seven states. Almost all were nonentities. No one had any enthusiasm for serving in this pathetic excuse for a legislature.

General Washington knew he was face to face with  politicians who  had refused to take the advice of talented young congressmen such as James Madison of Virginia and Alexander Hamilton of New York. They had been equally deaf to pleas from Superintendent of Finance Robert Morris, the most successful businessman in the country. These men had  grown weary of urging the importance of raising money from taxes and had all resigned in disgust.

Congress preferred to depend on loans from France and lately from Holland, a policy that the ambassador to France, Benjamin Franklin, had warned would make  America look like an international beggar too lazy to pay its own way. They had also ignored Washington’s advice to create a small peacetime army. Worst of all, Congress  had sent his officers and men home penniless, embittered and disgusted with their country—and with General Washington.

On  the torturous path to this low point in the  Revolution,  Washington had written a letter that revealed his own feelings toward  Congress. In a tense confrontation, he had  persuaded the officers to abandon their plan to march on Congress with loaded guns and demand they make good on their solemn promise to give them lump sums for their unpaid salaries. They had not received a penny for almost two years. Washington had rejected the advice of some officers to put himself at the head of this march and take charge of the country as King George I or some title that would be less obviously royal,  perhaps President General for Life.

Washington told Congress that he had assured  these angry men  he would do everything in his power to get them their money. If Congress failed to find the courage to levy the needed taxes and make good on its promises to pay the officers,  "then shall I have learned what ingratitude is" and the memory would "embitter every moment of my future life.”

Congress had failed to keep its word– failed miserably. Instead of gratitude, they had heaped abuse on the officers, accusing them  of wanting  to become “leeches” living off the labor of their patriotic fellow citizens.  Yet here  was General Washington, bowing to the politicians who had  callously dismissed the men who had won the eight year struggle with England.

How did Washington do it?  To an uncanny degree, he combined realism about politics and human nature with an ability to see beyond the moment,  to  retain a vision of  what the United States of America could become, if it found political leaders with courage and integrity.

The General drew his speech out of his coat pocket and unfolded it with hands that trembled with emotion. "Mr. President," he began in a low strained voice. "The great events on which my resignation depended having at length taken place (the peace treaty with England) I now have the honor of offering my sincere congratulations to Congress and of presenting myself before them to surrender into their hands the trust committed to me, and to claim the indulgence of retiring from the service of my country."

Washington’s  former aide de  camp,  Colonel James McHenry, was sitting as a delegate from Maryland. McHenry recalled that at this point, Washington's voice "faultered and sunk...[and] the whole house felt his agitation." But he recovered his composure and "proceeded...in the most penetrating manner."

"Happy in the confirmation of our independence and sovereignty, and pleased with the opportunity afforded the United States of becoming a respectable nation, I resign with satisfaction the appointment I accepted with diffidence." Washington  thanked the country and the army for its support.  He added that he hoped Congress would do something to acknowledge the "distinguished merits" of "the gentlemen who have been attached to my person during the war" -- his aides.

This reference to the officers that were also personal friends, members of his military “family,”  ignited some of the painful emotions Washington had felt when he predicted that that Congress’s failure to keep its promise to pay all the officers would embitter every moment of his future life. The feelings were still so intense, he had to grip the speech with both hands to keep it steady. He continued: "I consider it an indispensable duty to close this last solemn act of my official life by commending the interests of our dearest country to the protection of Almighty God and those who have the superintendence of them, to his holy keeping."

For a long moment, Washington could not say another word. Tears streamed down his cheeks. These words touched a vein of religious faith in his inmost soul, born of battlefield experiences that had convinced him of the existence of a caring God. This faith now included the belief that the birth of  the American nation was part of God’s  plan. But  it did not stifle the doubt and  anger and frustration with which he had wrestled in recent months.  The tears bore witness to his inner anguish – and his continuing hope.

General Washington drew from his coat a parchment copy of his appointment as commander in chief, dated June 15, 1775 -- eight and one half years ago. "Having now finished the work assigned me, I retire from the great theater of action and bidding farewell to this august body under whom I have long acted, I here offer my commission and take leave of all the employments of public life." Stepping forward, Washington handed the document to President Mifflin.

This was -- is -- the most important moment in American history. The man who could have  dispersed  a feckless Congress and obtained for himself and his officers riches worthy of their courage was renouncing absolute power to become a private citizen. He was putting  himself  at the mercy of politicians over whom he had no control and in whom he had  little confidence. This visible incontrovertible act did more to affirm America's faith in the government of the people than a thousand declarations by legislatures and treatises by philosophers.

No one put it better than Congressman Thomas Jefferson of Virginia, who was an eyewitness: "The moderation and virtue of a single character probably prevented this revolution from being closed, as most others have been, by a subversion of that liberty it was intended to establish."

In Europe, Washington's resignation restored America's battered prestige. It was reported with awe and amazement in newspapers from London to Vienna. The Connecticut painter John Trumbull, studying in England, wrote that it had earned the "astonishment and admiration of this part of the world." No one was more surprised than King George III of England. When he heard about it, His Majesty stuttered disbelievingly: "If he d-d-does that, he will be-become the g-g-greatest m-m-man in the world!"

It is hard to think of a better time for America to remember the story behind General Washington’s resignation. Disillusionment with the country, with its leaders in Congress and in the White House seems to be rampaging through millions of minds and hearts. It is time to remember that these things pass. Time to find in our own minds and hearts renewed vision and faith -- George Washington's vision and faith -- in what America can and will become.

Your final paragraph is a non sequitur to what was otherwise a straight and unexceptional piece. But to pretend that the troubles facing the infant United States at the end of 1783 could in any way compare with the petty differences of our current politicians is errant nonsense.