Mr. Bess is the author of Choices Under Fire: Moral Dimensions of World War II (Knopf).

World War II was profoundly different from the conflict the United States currently finds itself waging in Iraq, but that titanic struggle of the mid-twentieth century does offer three valuable lessons for the leaders and citizens of today.  Here is how I would sum them up: 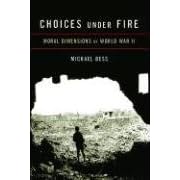 In my book, Choices Under Fire, I try to persuade the reader that World War II was far more complicated, from a moral point of view, than it is usually made out to be.  I wrote this book because I was unsatisfied with the tendency in many books and movies to picture World War II in morally simplistic terms of pure black and pure white.  The more I studied the war, the more I became convinced that most of the actual realities were far more complex, far messier, fraught with shades of grey.

The roots of the present disaster in Iraq lie in precisely this kind of oversimplification.  The rationale that the Bush Administration followed in launching this war, and the ideology that has shaped the waging of this war, have been based on a fundamentally flawed view of the situation in Iraq and the Middle East.  Saddam was often portrayed by the Bush Administration as a man akin to Adolf Hitler; the Iraqi people have been portrayed as a population oppressed by a tyrant, eager to embrace Western-style democracy if only they were liberated and given a chance.

This is an oversimplification because Iraq under Saddam was a very different place from Nazi Germany; and Iraq today is completely unlike the liberated Germany that John J. McCloy presided over after 1945.  Saddam was certainly an arch-criminal, just as Hitler was – but their two regimes, apart from the common feature of being brutal dictatorships, differed from each other in profound ways.  Germany had a sixty-year history of parliamentary democracy before the Hitler era; Iraq did not.  Germany had a complex and diversified industrial economy; Iraq’s economy was predicated primarily on oil production.  Germany, by the 20th century, had largely overcome the strife between Catholics and Protestants that had plagued it in previous centuries; Iraq’s bitter division between Sunnis and Shiites was still festering just beneath the surface.  Germany did not have a large ethnic minority clamoring for independence; Iraq had the Kurdish north.  Germany after 1945 formed part of a continent-wide European movement for reconciliation, economic integration, and peaceful political coordination.  Iraq sits in the middle of one of the world’s most intractably fractious and violent regions.

It was unrealistic to believe, as the Bush Administration did, that simply invading Iraq and unseating Saddam would pave the way for the kind of democratic renaissance that characterized Germany and Japan after World War II.  The nature of the threat posed by Saddam, the nature of the threat posed by Al-Qaeda, the nature of Iraqi society – all these were understood in an oversimplified way by the higher echelons of the Bush Administration.  As we are now witnessing very vividly, this question of oversimplification is not just an academic matter: it can have powerful consequences, and in this case has led to the tragedy that is currently unfolding in Iraq.

2. Hold to your society’s fundamental principles, especially in times of crisis.

The issue raised here is a vital one for any democratic society: how to balance a commitment to constitutional rights and liberties with the demands of security in wartime.  The lesson of World War II, in this regard, is clear: take the long view; don’t get lost in the panic of the moment.  In 1942, in the name of national security, we Americans seized a racially demarcated subset of our citizenry and threw them in the slammer.  Then, in 1944 and 1945, we developed huge fleets of planes and sophisticated techniques of incendiary bombardment, and systematically torched the cities of Germany and Japan, killing hundreds of thousands of helpless women and children.  In both cases, the justification was the same: We are at war.  We have to do this in order to survive.

But this turned out not to be true.  Not a single case of Japanese-American subversion was ever prosecuted during World War II.  There is no doubt that the Anglo-Americans could have prevailed in World War II with a much more restrained use of airpower; indeed, many military historians believe we could have won sooner if we had focused our attacks on oil installations and transportation infrastructure instead of plastering enemy cities indiscriminately.

History teaches few clear lessons, but the lesson here is unequivocal.  Staying true to our values is relatively easy in peacetime; but it is precisely in times of danger and crisis that our commitment to our deepest ideals is truly tested.  We need to ask ourselves: If I choose to sacrifice fundamental rights and basic moral principles in the short-term interest of national security, will my country still be the kind of society I can respect and cherish – even if my side wins?  Is there such a thing as paying too high a moral price for victory?  In the name of survival, will I have lost my soul?

Today’s discussions among Americans about the use of torture in dealing with terror suspects, as well as the illegal detention of suspects at Guantanamo, raise these questions just as powerfully as during World War II.  Do we pass the test this time around?

The most important long-term consequence of World War II lies in the new institutions of international collective security and global legal governance that it impelled humankind to build.  The war brought about a wave of fervent internationalism that resulted in the creation of the UN, the Fourth Geneva Convention, the Universal Declaration of Human Rights, the IMF, and the World Bank – to name just a few.  It set into motion a process of building international law, a process that has recently culminated in the creation of the International Criminal Court, the world’s first truly effective global-scale tribunal.  If humankind is going to survive the next hundred years, it will only be by working through (and steadily improving upon) these instruments of international security, arbitration, and cooperation bequeathed to us by the “greatest generation” – the victors of World War II.  There is no other way.  The coming age of biological weapons will be even more dangerous and unstable than the current age of nuclear weapons.  If we fail in building an ever more effective set of global institutions, centered on law and collective security, our chances as a species will not be very good.  This commitment to internationalism should lie at the heart of our country’s foreign policy for the coming century.