Is Biden Prepared to Adopt a Truly Progressive Foreign Policy? 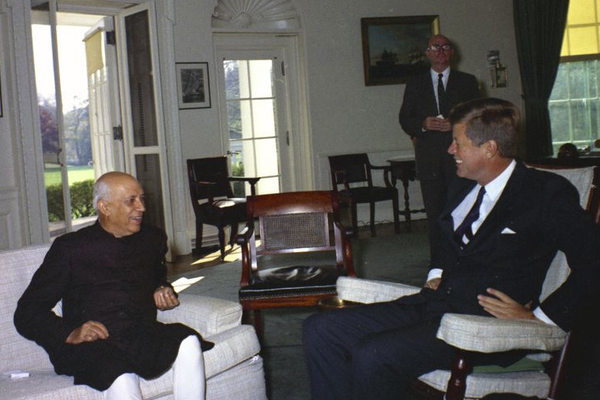 As left-liberal critic Peter Beinart recently opined, the Biden foreign policy team risks becoming a johnny-one-note of warmed-over Cold War security thinking.  Seeing American foreign policy “as a series of military challenges, which require military solutions,” the president’s top aides, Beinart suggests, have fallen victim to a kind of “groupthink.”  While admirably resolute in rallying the “West” against immediate aggression from Russia and looming security threats from China, the administration shows little interest in international initiatives of any other kind.  Why, in short, doesn’t a Democratic administration determined to rescue liberal internationalism from the clutches of global reaction have a more sanguine message for the world?

The answer, I think, lies in the frustrations with earlier liberal-democratic foreign policy initiatives dating to the end of World War II.  Then, as now, the first order of business was to stop aggression with a strong military show of force.  Victory over fascism, however, quickly pivoted to a broader plain where liberals determined to compete with communism for the hearts and minds of the postwar world.  Their efforts sometimes ran aground on corporate greed and the interventionist zeal of a missionary anti-communism—see Guatemala and Cuba, as well as Vietnam, for starters—but their setbacks should not blind us to the potential of their larger project.

Indeed, initial attempts to spread the spirit of the New Deal abroad were impressive.  Getting the Allied economies back on their feet by way of Marshall Plan aid and Bretton Woods agreements on trade and investments and infusing the postwar constitutions of West Germany and Japan with democratic accountability and strong trade unions were major accomplishments.  Tangible support for new democratic governments, ranging geographically from Israel to Costa Rica to Kenya, soon followed.  Aside from questions of independence and self-government, Democratic Party liberals pushed programs of mixed public/private development abroad.  Years before LBJ’s poverty programs in American cities, for example, both Truman’s and JFK’s ambassadors were collaborating with Prime Minister Jawarhalal Nehru’s ambitious community development projects in India.

As liberal sensibilities refocused on new priorities at home—with particular attention to racial justice and protections for ethnic minorities—so did they abroad.  Together, President Jimmy Carter, Secretary of State Cyrus Vance, and U.N. Ambassador Andrew Young famously invoked human rights principles in raising the prospect of a ‘two-state solution’ for Israeli-Palestinian tensions.  If ultimately succumbing to the intransigence of the two opposing parties across three Democratic presidencies and multiple Camp David and Oslo sessions, the U.S. Middle East policy at least laid claim to worthy and widely-respected ambitions.  Using the same matrix, but this time more successfully, Congressional Democrats (along with Republican internationalists like Sen. Richard Lugar) imposed crippling world-wide sanctions on South Africa’s apartheid regime in 1986, defying the veto of President Ronald Reagan.

Despite a legacy from which they might at least selectively take pride, the current administration’s foreign-policy mavens betray only a limited connection to the priorities of their predecessors.  Protecting the so-called Liberal World Order these days puts great emphasis on preserving “order” but very little on what “liberal” can or should mean.  In December 2021, shortly after his Afghanistan withdrawal and before his energies became fixed on the Russian invasion of Ukraine, President Biden determined to revive a progressive foreign policy with a largely-online Summit for Democracy.  Announced with great fanfare, the summit’s menu of commitments to free and fair elections and anti-corruption measures, condemnation of authoritarianism, as well as cooperation against COVID, registered more as a laundry list than an effective battle cry.  Similarly, the just-completed Summit for the Americas, in summarily denying entrance to Cuba, Venezuela, and Nicaragua, suggests a continuous settling of Cold War-era scores than innovative approaches to hemispheric problems.

Overall, even as it backs away from some of the free-trade measures favored by multinational corporations and global finance interests, the Biden team has yet to articulate an alternative to the “neoliberal” conventions that ruled Democratic policy circles from the late Carter years through the Obama era.  For that to happen, liberal policy makers will have to come to grips with exploding structural inequalities buried within ostensibly “democratic” political processes.  The rise of right-wing populism of various guises around the world is a direct product of this liberal deficit.  Do the world’s liberals and social democrats offer a believable vision for those disenfranchised by rapacious strong men, unemployment, climate change, and exploitative techno-elites?   Might the campaign to save Ukrainian self-government create an opening for a broader global democratic counter-offensive?

The best chance for a left-liberal foreign policy might, in fact, be near at hand. With the June 19 election of former guerrilla Gustavo Petro as president of Colombia, following the triumph across the past year of the left coalition behind Gabriel Boric in Chile, Social Democrat Rodrigo Chaves Robles in Costa Rica, and Xiomara Castro (wife of coup-deposed president Manuel Zelaya) in Honduras, Latin America presents a new political face to its powerful neighbor to the North. And all this before Brazil’s general election this coming October, where ex-president Luiz Inácio Lula da Silva is expected, according to most polls, to defeat and supplant right-wing populist Bolsonaro in the presidency.  Perhaps not since Franklin Roosevelt’s Good Neighbor Policy has the table been better set for a coordinated social welfare-plus-human rights agenda across the hemisphere.  In short, the opportunity is there for new movement of trade, immigration, labor, and women’s rights, not just vain talk of stemming drug trafficking.

Still, it will take a fresh wind of inspiration and ingenuity for Biden’s team to bend decades of crisis management towards new and hopeful political possibilities.  Reviewing the record, pro and con, of previous liberal foreign-policy initiatives can be a useful starting point—but only if the military option gives way to a broader set of objectives.