Dr. Alon Ben-Meir is a retired professor of international relations at the Center for Global Affairs at NYU. He taught courses on international negotiation and Middle Eastern studies for over 20 years. 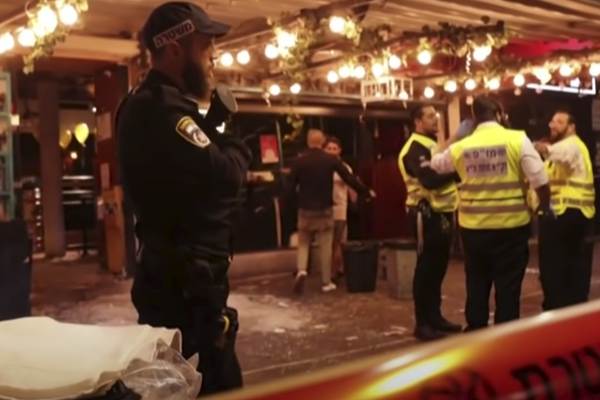 The scene of a recent shooting targeting Israeli civilains in Tel Aviv.

The spree of violent attacks in Israel in which Palestinians and Israeli Arabs killed 14 civilians in the past couple of weeks strongly suggests that it is time for Israel to face the bitter truth about the 55-year-old occupation and admit that making it central to Israel’s national security is an intentional fallacy. Prime Minister Bennett, like his predecessor Netanyahu, is using the recent attacks to justify the continuing occupation, when in fact it is the occupation itself that has instigated these attacks. The inescapable reality is that after more than five decades of ruthless occupation, the Palestinians – especially the young – have had enough and are no longer willing to accept servitude with no hope of a better future. The saddest part is that Israel is deliberately feeding into this hopelessness in the way it is treating the Palestinians, by employing an oppressive strategy to ensure a certain level of Palestinian resentment and hatred, perpetuating their resistance while refining the art of how to contain violence but not end it completely.

The fallacy of linking the occupation to Israel’s national security

The absurdity here is that anyone who is familiar with Israel’s legitimate national security requirements would admit that an independent Palestinian state that fully cooperates with Israel on all security matters (which must be an unequivocal precondition to any peace agreement) would greatly enhance rather than compromise Israel’s national security. A future Palestinian state would significantly augment its domestic security apparatus and work very closely with Israel to prevent extremists from either side from committing acts of violence against the other. Their cooperation should include sharing intelligence, conducting joint operations to prevent violent attacks by individuals or groups from either side, and establishing rules of engagement to prevent accidental clashes between their respective security forces. They invoke Israel’s experience in Gaza, which became a staging ground for Hamas’s attacks, forgetting that Israel withdrew from Gaza over night without and security arrangement with the Palestinian Authority which led to Hamas’s taking over. A security apparatus as described above would render Israeli arguments based on the Gaza withdrawal hollow and deceitful at best.

What is greatly worrisome is that three generations of Israelis and Palestinians (80 percent of Israelis and 92 percent of Palestinians), have been born since the occupation began at the end of the 1967 war. PM Bennett (who was born in 1972, five years after the start of the occupation) and millions of other Israelis grew up during the occupation and consider the West Bank, or Judea and Samaria as the Israeli government calls the occupied territory, as a natural extension of Israel proper. The sad thing is that instead of developing over the years a closer relationship between Israeli Jews and Palestinians and sympathizing with each other’s concerns and aspirations, Israel deliberately employed oppressive measures which have only widened the gulf between them and further compounded their mutual hatred and distrust.

Three generations of Israelis have grown to believe that the Palestinians are irredeemably violent and harbor a profound ill-feeling toward every Israeli Jew. Those Israelis are steadily growing in numbers (perhaps surpassing 50 percent of the population) and are moving to the right; they support the settlers, and have been made to believe the acrimonious public narrative dished out by right-wing leaders that the Palestinians represent an imminent threat, and so have adopted the common refrain that “the Palestinians are out to destroy us.” To be sure, Israel, especially during Netanyahu’s tenure as prime minister from 2009 to 2021, sought to keep the Palestinians as a perpetual enemy to serve his long-term objective of annexing much if not all of the West Bank.

Hence, the Israeli strategy is to maintain the occupation while remaining vigilant and uncompromising and making the Palestinians’ lives as hard as possible, hoping that many will eventually leave their communities and make more room for settlers. Tragically, Israel’s treatment of the Palestinians flies in the face of the reality that the Palestinians are there to stay, which Israel simply cannot wish away.

On the other side of this miserable divide, three generations of Palestinians have grown up with a no less poisonous mindset toward the Israelis. They have been indoctrinated just the same by their leaders that the Israelis are a vicious and brutal enemy bent on breaking their will and subjecting them to the terrible plight of indefinite occupation. The Israeli treatment of the Palestinians only reinforced the Palestinians’ narrative. The Palestinians are suffering under the occupation day in and day out by the Israeli military’s brutality—forced eviction, night raids, almost daily killings (in 2021 more than 300 Palestinians were killed), incarceration, demolition of houses built without permits (which are hardly ever granted), and extreme restriction on travel and movement. To be sure, for Israel to maintain the occupation, it often resorts to gross human rights violations to a point that ascribing the label ‘apartheid state’ to Israel has become increasingly common.

And the Palestinians’ lot in Gaza fares even worse, as Israel continues to enforce land, air, and sea blockades over the entire Strip, which it justifies on the grounds that Hamas poses an existential threat to Israel. That said, the Israelis have become accustomed to the low level of violence with Hamas and when the situation deteriorates, Israeli forces return to Gaza to “mow the lawn”, as they have done four time in the past—an acceptable ‘price’ in blood which Israel absorbs with near equanimity. Over the years Israel rejected Hamas’ call for a long-term ceasefire, 15-20 years which would have been established under a strict monitoring structure. This would have allowed Hamas to focus on rebuilding infrastructure and institutions and developing a vested interest in maintaining the ceasefire, instead of continuously trying to acquire more sophisticated weapons and prepare its forces for the next war.

This is what capsulizes Israel’s strategy toward the Palestinians: Israel needs a permanent enemy to support its occupation, which explains why it is not interested in any serious peace dialogue if the establishment of a Palestinian state is the ultimate objective.

What is greatly worrisome is that the Israeli public has become increasingly complacent, accepting the argument promulgated especially by former PM Netanyahu that the Israeli-Palestinian conflict is no longer an obstacle that prevents many Arab states from making peace with Israel. Netanyahu and now Bennett point to the normalization of relations between Israel and four Arab states under the Abraham Accords (the United Arab Emirates, Bahrain, Morocco, and Sudan) as evidence to support their argument. They conveniently forget that the precondition to normalization of relations was that Israel cannot annex any Palestinian territory and that the establishment of a Palestinian state with its capital in East Jerusalem is a prerequisite to a comprehensive peace between Israel and the Arab states.

For a relative majority of Israelis to embrace this distorted mindset—linking the occupation to national security—is ominously dangerous, as it leaves little or no room to reconcile with people with whom they must coexist in one form or another. Tragically, the perpetuation of enmity towards the Palestinians is forcing Israel to live by the gun. This is not only inconsistent with the vision of Israel’s founders, but is totally contradictory to Jewish values that have sustained Jewish lives throughout the centuries. Meanwhile, Israel is losing sight of the benefits and advantages it can reap from peace, but especially and most notably is the moral salvation which is central to Israel’s existence.

The far-reaching advantages of peace

Peace with the Palestinians will address Israel’s ultimate national security concerns, as Israel would integrate into the wider Middle East and North Africa, form security alliances against any common enemy, and create a crescent of allies extending from the Gulf to the Mediterranean that would severely undercut Iran’s hegemonial ambitions.

Peace with the Palestinians will open the door wide for the vast majority of Arab and Muslim countries to normalize relations with Israel, which will have far-reaching economic, and especially geostrategic and security benefits.

Peace with the Palestinians will pull the rug from underneath Iran, which uses the Israeli-Palestinian conflict to justify its hostility toward Israel. Moreover, Tehran will be compelled to end its “existential” threats against Israel, especially if the Arab Gulf states enter into a security alliance with Israel, which is being discussed.

Peace with the Palestinians will force Hezbollah, Iran’s proxy in Lebanon, and Palestinian extremists such as Hamas and Islamic Jihad, to reevaluate their position towards Israel, as peace would severely erode the foundation of their resistance.

Peace with the Palestinians will repair the dangerously widening political schism between Israeli Jews who seek to end the occupation and those who don’t, as well as between Israeli Arabs and Jews. Peace would help generate social cohesiveness, which is central to Israel’s domestic security and stability.

Peace with the Palestinians will dramatically improve the fraught relationship between Israel and the American Jewish community, which overwhelmingly supports ending the conflict based on a two-state solution.

Peace with the Palestinians would mitigate to some degree the rise of antisemitism, which countless people the world over ascribe in no small measure to Israel’s treatment of the Palestinians in the occupied territories.

Peace with the Palestinians will not poison the minds of another generation of Israelis who live under the illusion that they can prosper and be safe only if they remain in control of the territories and thwart the Palestinians’ aspirations for statehood.

Peace with the Palestinians will save Israel the additional hundreds of millions of dollars that it allocates to security in the West Bank, which it could alternatively invest in gentrification of scores of debilitated Israeli neighborhoods, improving the infrastructure and housing in many poor communities desperate for a dignified and humane standard of living.

Peace with the Palestinians will project Israel in a new light to the community of nations. Instead of being condemned and criticized because of the occupation, it will be praised for its courage and fortitude and for righting the wrong while enhancing its national security.

Finally, peace with the Palestinians will free the Israelis from the heavy and distasteful moral burden of the occupation, which they have been carrying for more than five decades.

Ending the occupation on moral and practical grounds

The Bennett government, however tenuous it may be, should treat the spree of Palestinian attacks as a wakeup call and begin a process of healing with the Palestinians. Instead of resorting to even more oppressive and ruthless measures in the West Bank, presumably to prevent future attacks, such brutal measures will only galvanize the Palestinians’ resistance and potentially lead to a massive violent uprising. Thousands of Palestinian youth will be prepared to sacrifice themselves instead of living despondent and despairing, with no prospect of ever being free and realizing their dreams. It is now only a question of time when they will rise, unless Israel realizes that the occupation is the recipe for a disaster and acts to end it, for its own sake just as much as for the Palestinians.

Israel does not need a perpetual enemy to survive, and it can no longer justify the occupation on the basis of national security concerns. Israel’s birth was the triumph of what’s right and moral over the worst of all evils. It was the moral responsibility of the community of nations in the wake of the Holocaust that carried Israel into existence. Israel’s strength, permanence, and fortune rests on that moral foundation, which is, and will always be, the essence of its very being.

Only by raising that moral torch high in pursuit of what is right and just, will Israel ensure its continuing existence as a democracy, free and independent, living in safety and security, that no enemy can challenge with impunity.