We Need to Talk About Cuba

Joseph J. González is Associate Professor of Global Studies in the Department of Interdisciplinary Studies at Appalachian State University and is at work on Facing the Sun: Cuba's Challenge to the American Empire, 1895-1917. 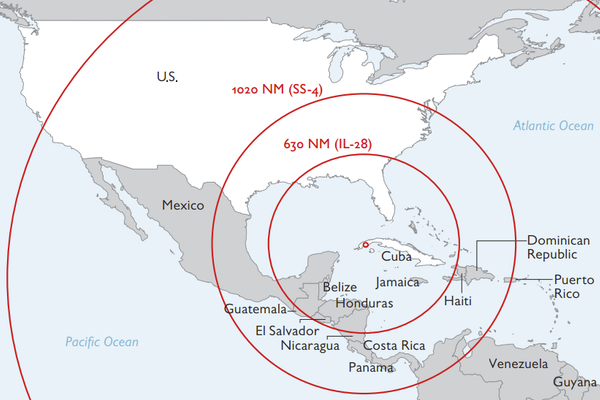 Graphic produced by Defense Intelligence Digest (2011) based on 1962 intelligence estimates of the range of Soviet missiles placed on Cuba.

Russia’s invasion of Ukraine dominates the news. So does the response of the United States and its Western allies, from further sanctions and future escalations, to humanitarian aid, and lethal weapons.

This may seem odd to say. After all, what could be more irrelevant than an island museum of failed economic theories and Cold War defeats?

But Vladimir Putin does not see things that way. In fact, evidence suggests that he considers Cuba a partner in challenging U.S. power—just as his Soviet predecessors did a generation.

I am a historian of Cuba—U.S. relations. And it seems to me that once again circumstances are pushing Cuba and Russia into an alliance.

At the moment, Putin faces an unenviable situation: a stalled invasion, a determined Ukraine, a declining economy, and a united West.

Mired in stalemate, Putin will soon consider ways to attack his principal adversary.

Sooner or later, his eyes will land on Cuba.

Cuba is already part of Putin’s worldview. For years, his government has expressed support for Cuba’s struggle with the U.S.

In December 2021, Putin’s deputy minister of foreign affairs, while visiting Cuba., speculated that a conflict over Ukraine could provoke another Cuban Missile Crisis.

And in February 2022, as Ukraine refused to accede to Putin’s demands, the same diplomat publicly mused about the possibility of putting Russian troops in Cuba.

The Cuban government has not rejected these possibilities. Instead, it has spoken of a stronger “strategic partnership” with Russia, in the face of tighter U.S. sanctions and a sharp economic decline.

The Cuban government has also refused to condemn Russia for the invasion of Ukraine.

Allies in the Cold War

This alliance should come as no surprise.

During the Cold War, Russia and Cuba allied themselves as closely as two nations could.

The Soviet Union subsidized the Cuban economy with billions each year, while providing weapons for their armed forces.

In return, Cuba supported Soviet foreign policy goals not only throughout Latin America, but also the world.

Only the collapse of the Soviet Union in 1991 ended their alliance.

Three decades later, Cuba and Russia once again have the same enemy: The United States.

With Cuba’s permission, Putin could take a page from his Soviet predecessors, stationing military units on Cuban soil and in Cuban waters, and constructing signals intelligence facilities.

Russians may have already reactivated a listening outpost west of Havana.

Most dangerous of all, Putin’s government could follow Khrushchev’s example and station nuclear weapons in Cuba.

Putin rattled his nuclear saber last month. Is there a better place than Cuba from which to continue?

The U.S. government does possess a variety of tools to counter Putin and secure Cuba’s neutrality at low cost.

Consider remittances. Cuban Americans have sent billions to their families in Cuba since 1977. In 2019, the Trump administration stopped remittances because the Cuban military profited from these transactions. The Biden administration continues this policy.

Allowing remittances would ease Cuba’s economic situation –and give the Cuban government an incentive to keep Putin at a distance.

So would increasing the staff at the U.S. Embassy in Havana.

Added personnel would reduce the waitlist for immigration to the U.S., among the highest in the world.

More U.S. diplomats could also process more visas for Cubans wishing to visit the U.S., who would return with dollars for the Cuban economy.

The amount of the subsidy was, a Cuban economist told me, about $4 billion annually.

For the past fifteen years, the United States government has imposed sanctions on Venezuela; the Trump administration made them much more severe.

These sanctions have facilitated Venezuela’s economic crash and impaired its ability to help Cuba.

It would also give the Venezuelan government a reason to ignore Putin’s overtures.

In some ways, this moment in global politics seems reminiscent of the Cold War.

But it is also very different.

Russia is unlikely to forge a close alliance with Cuba. The interests of the Putin government lie in Europe, not in global revolution.

Nor are the Cuban people necessarily anti-American.  Yes, older Cubans may remember the glories of Fidel Castro, but younger Cubans want more freedom, more prosperity, and closer ties to the U.S.

They are also increasingly willing to make their unhappiness known to Cuban authorities.

America’s role has also changed. Having enjoyed global hegemony since 1991, U.S. policymakers now face a world in which smaller states, like Cuba, can influence events.

How will U.S. policymakers respond to this new context? With new policies or traditional positions?

For the moment, that remains unclear to America’s allies and adversaries, perhaps even to American policymakers.

But an unstable world will require answers—probably sooner rather than later.