Dominic Selwood is a historian and barrister. He writes for the Daily Telegraph and other British newspapers. His most recent book is Anatomy of a Nation: A History of British Identity in 50 Documents (Constable, 15 March 2022), a comprehensive survey of British history drawing on a vivid range of original texts. @dominicselwood 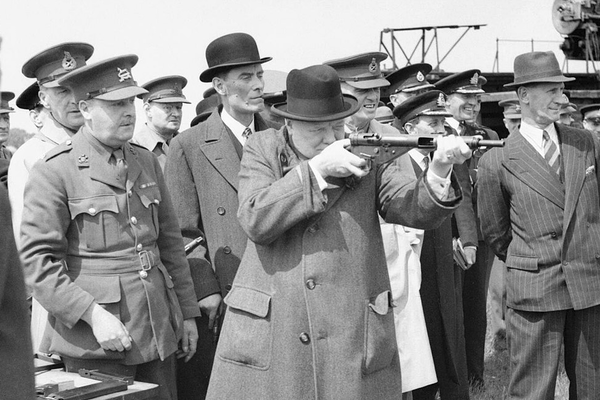 ‘Since time immemorial,’ Vladimir Putin monologued – in the same self-appointed savant tone that fills Mein Kampf – ‘the people living in the south-west of what has historically been Russian land have called themselves Russians.’

Putin’s parallel universe of history mystified most Ukrainians, but they were not his intended audience. He was meticulously setting out his Weltanschauung – that special, rock-solid understanding of the world only the insane develop — in order to justify starting the largest military offensive on European soil since World War Two.

This clunky legitimizing propaganda revealed two things about Moscow’s thinking. First, the Kremlin knows the power of invoking historical injustice as an authority that can – at least, in the popular conscience – sanction armed conflict. And second, after massaging history for a century, the Kremlin is perfectly aware that not everyone is up to speed on all the details, leaving plenty of scope to just make it up.

Russia may border 16 countries and span 11 time zones, but the confusion over its history is not only down to size and a correspondingly complex past. Today. historical uncertainty is everywhere, feeding confusion about the present and future, especially over semi-abstract ideas like nationhood and identity.

The twentieth century dawned on a Europe of empires. Russia had one, as did Turkey, Germany, Austria-Hungary, and Britain. By the end of World War One a few decades later, the first four had been crushed, and Britain’s was soon to implode. The result was, and remains, that these former powers tie themselves into knots striving to find their new shape and role in a post-imperial world. The adjustment is understandably multidimensional, and lies behind Putin’s central dilemma, which in his mind comes down to whether he is tsar of the Russian Empire, chairman of the Presidium of the Supreme Soviet, dictator, or a divinely mandated amalgam of all three.

Britain, too, is facing post-imperial challenges of role and identity. Not long ago it was the fulcrum of history’s largest empire, controlling one quarter of the globe. Yet now, with all that gone, it has to navigate the challenges of how to be a country smaller than Kansas and 12 other U.S. states.

The Brexit referendum of 2016 was the moment it became clear to all just how uncertain Britain now is of itself. Although the vote was about Britain’s future, the campaigns spent more time offering alternative visions of the country’s past. One was of a buccaneering, swashbuckling, plucky, patriotic nation that rode the waves and carried cricket and the King James Bible to the farthest reaches of the globe. The other was of an internationalist, modern, European nation that was a driving force of the E.U.’s mega-economy and a uniquely placed bridge between Europe and the U.S.A.

When the Brexit result came in at 51.9 to 48.1, all sides were stunned. Even taking into account the shenanigans and electoral rule breaking of Vote Leave – and the undoubted Russian interference to help break the E.U. apart – the result was still inescapable. Britain is fundamentally fractured, and its people have wildly different views of what the twentieth-century country stands for.

In the aftermath of the referendum, yet further divisions became apparent. Although defacing statues of Winston Churchill is now something of a spring tradition, seeing the words “was a racist” sprayed onto his effigy outside Parliament in June 2020 was a profound shock for many, and came the day after a bronze effigy of Edward Colston – an early eighteenth-century member of Parliament and slave trader – was graffitied, bound, battered, and rolled into the icy depths of the Bristol Channel. The result was the drawing of battle lines in what has become the “culture wars.” Ranged on one side are those who see no role for slavers and imperialists like Colston or Churchill in defining modern Britain. On the other are those who feel that history is what it is, and find attempts to curate or censor it problematic.

As a historian writing about British identity, one of the questions that fascinates me most is whether this degree of fracture is new, or whether we have been here before. In Anatomy of a Nation, I trace the history of Britain from 950,000 BC to the present, and one of the most striking trends to emerge is just how often models of Britishness have come to an end and been reinvented.

In AD 43, Britain was a mosaic of Celtic tribes. But when the Roman Emperor Claudius’s legions landed, it suddenly became the northwestern tip of a Mediterranean empire stretching into Africa and the Middle East. Then, in AD 410, when the Romans clambered into their ships and set sail for good, Britain went back to being a Celtic nation, but not for long. Over the following centuries, settlers came from across the “whale road” and “dolphin bath”– from Denmark, Germany, and the Netherlands – and a new culture, the Anglo-Saxons, emerged (I am aware of acute modern sensitivity around the term, but I struggle to find an accurate alternative for it in the pure historical sense). Before long, though, Viking longships arrived and, after centuries of rannsaka and slahtr, they took the throne of England, and Old Norse rang out as the language of court.

Many of these changes were fundamental in terms of DNA, language, and culture: in other words, in nationhood. In the process, Britain reinvented itself again and again. And it did not stop with the Vikings or William the Conqueror’s subsequent Norman invasion of 1066. After the failure of the 100 Years’ War, England’s monarchs shed their Frenchness and forged a new English identity. And after the chaos of Oliver Cromwell’s disastrous military dictatorship, the country had to rebuild itself as open and tolerant of religious diversity.

All this demonstrates that Britain’s powers of reinvention are real and recurring. The U.S. can point to its Constitution and demonstrate that it still enshrines the country’s values. Britain cannot do likewise as it has no founding mission statement. Also, it has no single historical people. Celts, Romans, Anglo-Saxons, Vikings, Normans are all distinct, from varying ages, and have been interspersed with those who have come from all over the globe. Africans and Jews since Roman times. Indians at least since the days of the East India Company. Roma from the reign of the Tudors. Those from across the former Empire in the mid-twentieth century, and from the E.U. in the final quarter of the century and into this one. All of these people have changed the composition of the country.

Britain has always been an evolving and fluid concept. It has not had one people steering a defined nation down through the millennia. Rather, it has succeeded as many different peoples and concepts, variously finding structures – with differing degrees of success – for England, Ireland, Scotland, and Wales to co-exist. Its challenge today, in meeting the realignment of Europe’s tectonic plates in the post-imperial age, is to find a modern identity. And my sense is that from the wide diversity of identities it has had, the next will be significantly different from the Churchillian one that still holds sway in many parts of the nation. Britain’s challenge, now, more than ever – not least because war has returned to Europe – is to find a role that will enable it to contribute to the stability of its continent. Russia and Britain are facing similar challenges of adapting to the new world order. Putin’s solution is monstrous. Britain has yet to find its pathway forward.