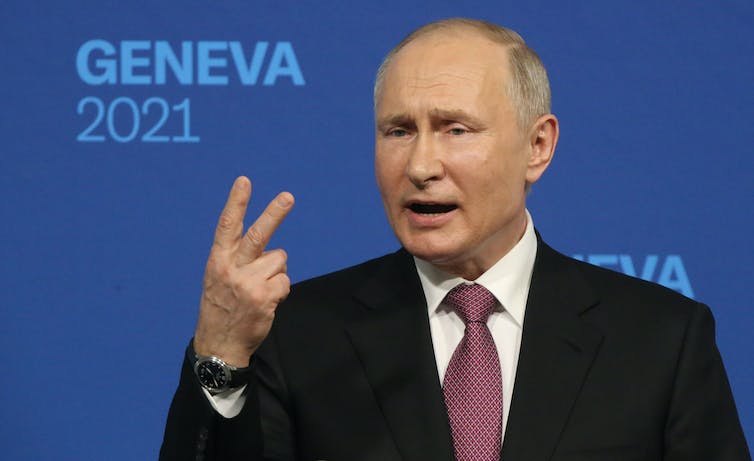 V is for victory? Or vanquished? Mikhail Svetlov/Getty Images

Amid a staunch and passionate defense that has slowed the Russian advance to Kiev and global condemnation, Vladimir Putin’s motivation for invading has been subject to speculation: Just what does he hope to achieve by war in Ukraine?

Some have argued that Putin was responding to NATO expansion or was driven by a compelling sense of Russian nationalism. Others maintain he saw an opportunity to revive Cold War Soviet influence in Eastern Europe. Still others claim he is simply delusional, an oligarch divorced from reality.

But what if Putin’s decision to invade was based partly on a commonly held assumption that offensive wars of choice, more often than not, will deliver?

It’s worth evaluating if this war is as much about local and regional questions over who controls the eastern Ukraine Donbas region as it is about an unquestioning faith that using armed force is the surest path to achieving one’s political aims.

Some U.S. foreign policy analysts, like the University of Chicago’s John Mearsheimer, contend that American support of NATO’s eastward expansion is just as important in explaining the current crisis in Ukraine.

But as a military historian who served in the U.S. Army for 26 years, I believe a more fundamental question is why policymakers, not just in Russia, have so much faith in war when even small miscalculations can lead so easily to disaster.

War’s promise has enticed political and military leaders for millenia. The Athenian historian Thucydides spoke of Greek city-states motivated to war by honor and profit – as well as fear of their enemies.

Roughly 2,200 years later, America’s Founding Fathers saw war as the surest way to break from British imperial control, to forge a new identity free from external influence and to create a sovereign nation. It would take a major civil war less than 100 years later to decide – though surely not settle – similar questions for African Americans enslaved by those same revolutionaries and their descendants.

The spoils of war can be great: independence, increased power, and land and resources.

And yet for every military success, the historical record offers ample instances that should give pause. Napoleon, for example, may have been on the precipice of near total European control in the early 1800s. But the same instrument of mass armies that brought him to such heights assured his downfall when wielded by a coalition of rival continental powers.

In two world wars a century later, German leaders envisioned a new world order delivered by grand military victories. The results, however, left tens of millions dead across the globe and a twice-defeated Germany seeking redemption and relevance during the Cold War.

During those post-World War II decades, French military forces would face defeat in Indochina and Algeria, the Americans a similar fate in South Vietnam, and the Soviets in Afghanistan. Wagering on war clearly wasn’t always a safe bet.

The lure of armed victory

What makes war seemingly worth these inescapable risks? Perhaps it is the conviction that armed victory is the ultimate decider within any international political arena.

In the Cold War era, Soviet leaders from Josef Stalin to Leonid Brezhnev relied on war, and the threat of war, to compete globally with the United States. In practical terms, brutal Soviet military incursions into Hungary in 1956 and Czechoslovakia in 1968 seemed the most efficient means of keeping Eastern European satellites within the Warsaw Pact orbit. It appears that Putin reviewed his recent successes in Chechnya, Georgia and Syria as a harbinger of victory in Ukraine.

But flexing military muscles comes at a cost. The placement of Soviet missiles in Cuba in the early 1960s brought the world to the brink of nuclear war. The costs of maintaining an enormous Cold War army and navy enfeebled an already unstable Soviet economy. And, without question, the long war in Afghanistan contributed to the ultimate demise of the Soviet empire as the Cold War itself drew to its close.

So, what perspectives can we gain from this devotion to war’s promise?

First, the moral aspects of choosing war matter. As philosopher Michael Walzer contends, there often is a thin line between offensive wars of choice and criminal acts of aggression. I believe more Americans need to spend time considering where these lines may be drawn; there’s a great deal of moral illiteracy about the causes of America’s wars and its conduct in fighting them.

Writing about the justness of the U.S. war in Iraq, journalist Matt Peterson wrote in The Atlantic that “There’s a broader sense of moral confusion about the conduct of America’s wars.” Putin’s assault on Ukraine serves as a reminder that people should examine more deeply their nation’s stated reasons – and stated justifications – for going to war.

The assumption that war is a transformative force that engenders political and social change also has not always proved true. When the George W. Bush administration decided to invade Iraq in 2003, key advisers saw an opportunity to transform Iraqi governance and society. Yet local leaders proved far more resistant to external change than these policymakers foresaw, which was also the case in the Afghan and Vietnam wars. In Ukraine, Putin seems also to have miscalculated the strength of local opposition.

The costs of war

Indeed, many modern conflicts have illustrated that victory is not quickly and cheaply achieved. At the end of his presidency, Dwight D. Eisenhower counseled about the hidden costs of a military-industrial complex feeding an enduring state of war. His fears appear to have been realized. The Costs of War project at Brown University calculated that the Pentagon has spent “over $14 trillion since the start of the war in Afghanistan, with one-third to one-half of the total going to military contractors.” That war killed at least 47,000 Afghan civilians and more than 6,000 American service members and contractors.

All this raises a reasonable question over whether the benefits of these wars have been worth the tremendous financial and human costs.

[Over 150,000 readers rely on The Conversation’s newsletters to understand the world. Sign up today.]

As the world follows the unfolding tragedy in Ukraine, I believe it important to consider the enduring, yet faulty promise of war.

Athenian history might be a good place to start. As Thucydides cautioned, “It is a common mistake in going to war to begin at the wrong end, to act first, and wait for disasters to discuss the matter.”