Patrick Henry and the Defense of Democracy 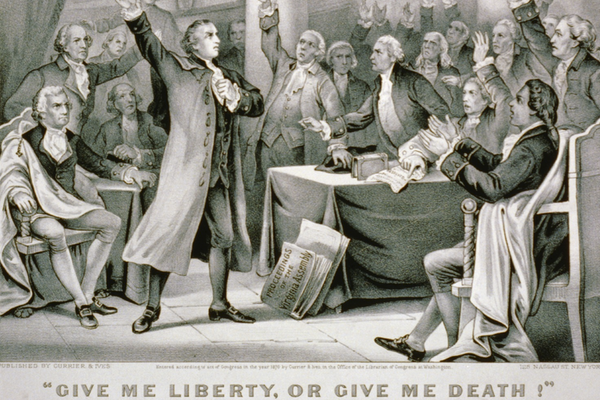 On January 6, 2021, and again on its anniversary, rioters and their defenders invoked an almost mythological belief in “1776” and the most famous words of Patrick Henry – “give me liberty or give me death.” Henry’s speech is a favorite of the modern Tea Party and those who wish to deny federal authority or to ignore laws with which they disagree.

This, though, is to misunderstand Henry. His “liberty or death” speech was a response to British efforts to tax Americans unrepresented in Parliament and undermine the power of elected assemblies. His understanding of democracy is much more clearly shown in his opposition to ratification of the U.S. Constitution and then, later, his defense of the Constitution that he had opposed.

In 1788, Henry became the leading antifederalist, contesting ratification of the new Constitution. He warned that the federal government would become too powerful, too distant from the people. The presidency “squints to monarchy.” Henry almost defeated ratification in Virginia, but he lost. The Constitution was ratified.

When other antifederalists, led by George Mason, met to plan continued opposition to the Constitution’s implementation, Henry objected. He had opposed ratification “in the proper place – and with all the powers he possessed,” but having lost, it was time to “give it fair play.” Henry retired, refusing appointments as a Supreme Court justice, secretary of state, ambassador to France or Spain.

The story, though, does not end there. Within a decade, Henry was declared a prophet as the federal government’s power soared. In 1798, the Alien & Sedition Acts were adopted, effectively making it illegal even to criticize Congress or the president.

Many American rose in opposition, including Thomas Jefferson and James Madison. Some advocated violent obstruction of federal authority. Kentucky, at Jefferson’s urging, declared the federal laws could not be enforced in Kentucky; they were “nullified.” Virginia, under Madison’s guidance, adopted resolutions only somewhat less revolutionary. The prospect of individual states disagreeing on which federal laws were valid and enforceable in their state raised the specter of interstate conflict, possibly civil war. Reports circulated of states arming for conflict with the federal government.

George Washington begged Henry to set aside his opposition to ratification and come out of retirement. Henry, recognizing that the nation was at risk, agreed: “I should be unworthy the character of a republican or an honest man if I withheld my best & most zealous efforts, because I opposed the Constitution….”

Patrick Henry – the leading antifederalist, the man who warned that the Constitution would create a government too powerful and distant from the people that would interfere with their rights – came out of retirement to defend the Constitution that he had opposed.

Henry’s final political speech, at Charlotte Courthouse in March 1799, speaks powerfully to the nature of democracy. He reminded the gathered throng that he opposed ratification. “He had seen with regret the unlimited power over the purse and sword consigned to the General government,” but the people ratified and, even for those who had opposed, “it was now necessary to submit to the constitutional exercise of that Power.”

The Alien & Sedition Acts were “odious & tyrannical,” but state interference with federal laws was unjustified and unconstitutional. The solution was the ballot box: “it belonged to the people who held the reins over the head of Congress, and to them alone....” The people’s power was in their votes.

Henry recognized that if tyranny “cannot be otherwise redressed,” people could revolt. But he warned, if forced to that extremity, “You can never exchange the present government but for a monarchy.” If Americans cannot live within our Constitution and laws, the republic fails. Despotism will result.

Henry won his election – Henry always won his election – but died before he could take office. But heeding his warning, the nation pulled back from the brink. The idea of nullification was swept aside (unfortunately to be resurrected in the run-up to the Civil War). Jefferson was elected president, but in a distinctly Henryesque manner: His supporters went to the ballot box and insisted upon change. Jefferson learned his lesson, in his first inaugural address stressing the “sacred principle that … the will of the majority is in all cases to prevail.”

The legacy of the election of 1800 is often given as the peaceful transfer of power between opposing parties, but it almost did not happen. Patrick Henry, the leading antifederalist, came out of retirement to remind the people that in a democracy they are called to respect the majority decision, even when they disagree with it. That essential legacy was respected in America as a foundation of our nation for 220 years.