No Land, No Life: The Structure of Debilitating Black Land Loss in the South

Annelise Straw is a PhD student in the Department of Geography at the University of Kentucky where her work focuses on food and agriculture and its various intersections with social and environmental justice. 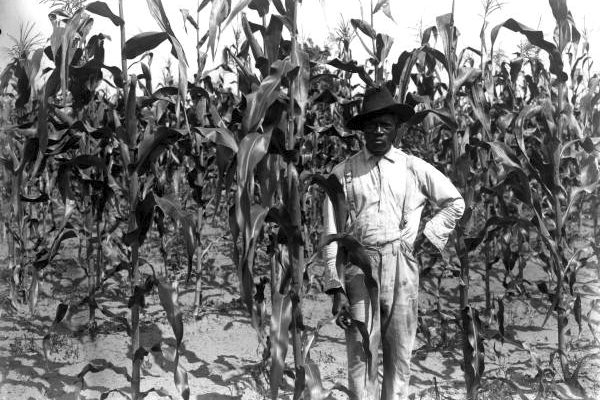 A Florida farmer with his corn crop, 1913. Photo State Library and Archives of Florida

After hundreds of years of violence against black people, stemming from a fundamental inequity in land, wealth, and power, the election of President Biden was supposed to usher in a new era for black farmers.

After the 2020 election, Democrats, now holding power in both Congress and the White House, promised to address the decades of discrimination in access to farmland and other public agricultural support programs needed for the improvement of black-owned farms and livelihood in the United States. Centuries of systemic injustices including the loss of life, livelihood, and hard fought-for familial land, and exclusion from capital markets, have further entrenched the economic vulnerability of black farmers.

Examples of such structures include racist lending and farm credit practices by the USDA and racially targeted foreclosure or forced sale of land. Not being granted the financial loans and capital necessary to farm family land is a form of economic and emotional structural violence that further perpetuates the brutal history of harm and disenfranchisement of black life. Without access to farm loans, black farmers are incapacitated, unable to farm their ancestral land, and faced with the gut-wrenching possibility of having to sell part or all of their family’s history.

socially disadvantaged farmers and ranchers in the American Rescue Plan as a way to remedy past discrimination in USDA loan programs.

Unsurprisingly, in light of the history of blacks in agriculture, this money was blocked by banks that argued that they did not profit from the deal and lawsuits from white farmers before any funds were ever distributed. It is well documented that banks have a long history of racist practices affecting urban land ownership, such as redlining, which historian Richard Rothstein described as the “state-sponsored system of segregation.” Less discussed is the role that racist lending has played in the massive loss of black-owned farms.

To help understand why and how land loss continues to reproduce black dispossession, here is a short version of the history. In post-Civil War America, land was a key object of freedom for black families. With land came the ability to provide for one’s family, be self-sufficient, and have their own home. Freedmen believed the government would contribute to agrarian reform by providing forty acres to formerly enslaved farmers. This promise looked like it was coming to fruition in 1866 when Congress passed the Southern Homestead Act, making 46 million acres of land available for freed slaves and Union supporters, but the promise never materialized.

The federal government’s failure to deliver on this promise has continued from one generation to another. The peak of black land ownership occurred between 1910 and 1920, with 14% of all Southern U.S. farmers identifying as black and owning 16 million acres of land. White rage and the violence it propagated were rampant at the end of the nineteenth century, with the success of black farmers threatening the reign of white supremacy. Ray Winbush, director of the Institute for Urban Research at Morgan State University asserts that black men were lynched between 1890 and 1920 because whites wanted their land: “if you are looking for stolen black land, just follow the lynching trail.”

During the Great Migration of the early 20th century, blacks left the rural south for the urban North to escape the deliberate, state-sanctioned maiming that was a result of Jim Crow laws and customs. The black farmers who remained in the South faced unfair federal agricultural policies and racist lending practices and, as Pete Daniel states in his book Dispossession, “suffered their most debilitating discrimination during the civil rights era when laws supposedly protected them from racist policies.” Today, only 45,000 out of the 3.4 million U.S. farmers are black and structural discrimination preventing access to credit has been even worse for heirs who, until the passage of the 2018 Farm Bill, had not been eligible to access farm loans and credit from the United States Department of Agriculture (USDA).

Heirs property, land that has been handed down through a family without a will, is common throughout black communities in the Southeast United States and fraught with peril. When a landowner dies without a will, all offspring inherit the property with equal ownership shares and no clear title. The legally unclear ownership of heirs property puts owners (often second, third, or fourth-generation landholders whose ancestors were enslaved) at financial risk of court-ordered auctions and forcible sale to real-estate developers and agribusiness, excludes them from farm loans and operational capital, and reproduces issues that have plagued black agrarianism since slavery, sharecropping, and tenant farming. As such, land ownership remains fundamental to the continued existence of many communities.

In Spring 2019 I spoke with black farmers (whose names I withhold for privacy reasons) in Orangeburg, South Carolina and Augusta, Georgia whose lives and livelihoods are being upended due to racial discrimination and economic violence. Common themes throughout the interviews refer to discriminatory lending practices from the USDA Farm Service Agency (FSA) and the psychological stress and trauma of losing part or all of one’s family land. One farmer stated:

“It's still hard because now we're still trying to access credit and assisting helping other farmers do the same thing. This is something that I see in the black farming community... we have a problem with accessing credit. It's not as easy to access it as our peers, our white peers. And the only thing that I see different is just the color of the skin... We can come with the same amount of assets and as they do, same credit score, and they'll [the FSA] tell us no. They'll tell us no before they even see the application. They'll tell us they don't have money.”

Another farmer supported this by noting,

“They foreclosed on my family farm and sold it to one of the largest grain producers in the US owned by white elites.”

“So, when they foreclosed against me in my last bankruptcy, they said I had close to two million dollars’ worth of debt, with interest, and also their lawyer fees I had to pay. Which was like two or three hundred thousand dollars’ worth of lawyer fees. It was unbearable.”

These are just two of the many statements I heard detailing the detrimental economic toll that lack of access to farm credit has on black farmers.

The success of black farmers is determined by the social and economic power structures at play in agriculture. However, decades of racist policy making, and systemic injustice have effectively squeezed black farmers financially to the point of insolvency and pushed many out of the farming system, allowing majority-white-owned larger farms to acquire formerly black-owned farmland easily, and often at an unfair price. Factors like heirs property, partition sales, and the history of unequal credit lending have created a situation where black landowners are systematically most vulnerable – maintaining the thread of black economic disenfranchisement that has existed since the end of the Civil War.

The USDA under the Biden administration is focused on equity and increasing investments (such as the $4 billion for debt forgiveness) for underserved producers – outlining these actions in the Build Back Better Plan. The agency rolled out the Heirs Property Relending Program in July 2021 promising to assist farmers in establishing permanent legal ownership of more than 1.6 million acres of heirs property in the Black Belt. Additional programs announced in the Fall of 2021 include the Racial Justice and Equity Conservation Cooperative Agreements providing $50 million to historically underserved farmers and $4.7 million to expand access to the Farm Service Agency. Most recently, in January 2022 Secretary Vilsack signed an agreement between the USDA and the Federation of Southern Cooperatives renewing USDA’s commitment to working with the Federation, assisting African American landowners, and ensuring access to critical information and resources.

However, these programs are already struggling to effect change. White farmers, who argue that debt relief for farmers of color represents reverse racism by giving black and minority farmers an unfair advantage, have stymied these programs in court. At least 13 lawsuits have been filed trying to prevent the USDA from realizing its debt relief programs. The most influential of these is Miller v. Vilsack, led by Texas Agriculture Commissioner Sid Miller, who argues that debt relief for black and minority farmers is unconstitutional, violating equal protection under the law by explicitly excluding white farmers from the program on the basis of race. Quoted in the Associated Press, Miller says “It is just flat wrong. Us Republicans and old white guys, we get accused of being racist all the time, but this is racist by the administration. It couldn’t be a plainer case of racist.” In another case, ruled in June 2021, U.S. District Judge Marcia Howard issued a preliminary injunction halting the debt relief program because it relies “on present discrimination [against white farmers] to remedy past discrimination.”

Moving forward as a class action lawsuit, the outcome of Miller v. Vilsack will determine not only if black farmers receive the debt relief they are long due but also black farmers’ relationship with the USDA long-term. While we wait for the conclusion of the case, we can look to T-Nehisi Coates’ case for reparations and expand the idea of reparations from economic repayment to land redistribution.

For black communities in the U.S. South, the agricultural practices that make up the agrarian lifestyle carry historical traumas rooted in plantation slavery and, as scholar Monica White says, the “constant struggle to hold onto the land – often against overwhelming odds fueled by racism and discrimination.” Centuries of systemic injustices including the loss of livelihood, lives, and hard fought-for familial land, and exclusion from capital markets have been perpetuated by the economic, political, and legal structures that give way to the debilitation of black bodies and life.