A Walk Around the "Wood that Built London"

C.J. Schüler is the author THE WOOD THAT BUILT LONDON: A Human History of the Great North Wood, available now from Sandstone Press. His previous books include the Stanford-Dolman shortlisted Along the Amber Route: St Petersburg to Venice. 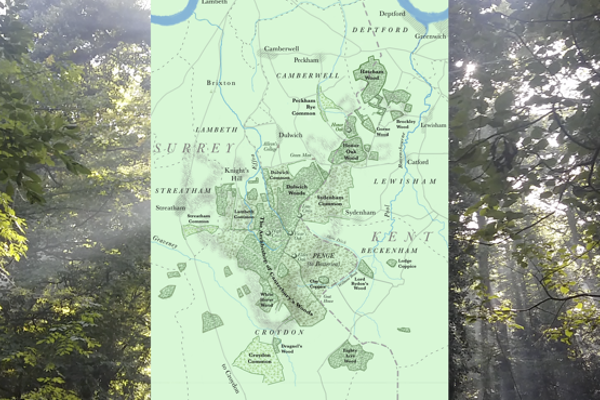 Working as a conservation volunteer at the London Wildlife Trust’s Local Nature Reserve at Sydenham Hill Wood in southeast London, I was fascinated to learn about the ancient woodland of which it is a surviving remnant. This expanse of oaks once covered a seven-mile stretch of what is now suburbia, cresting a range of hills that formed the Kent-Surrey border. As a large part of it lay in the northern reaches of the manor of Croydon, it was known as the North Wood or Norwood; the latter name has been inherited by a suburb in the area.

As the author of three illustrated histories of cartography, I naturally turned to old maps, both printed and manuscript, to see what they showed of the wood and its former extent. But they do not tell the whole story. Before there were maps, there were perambulations: written accounts of journeys around the boundaries of a manor or estate, noting landmarks and the distances between them, and the adjoining fields, farms and woods.

The painstaking business of archival research has been considerably eased in recent decades by the development of searchable online catalogues. That of the UK’s National Archives lists not only the vast collections held in its campus at Kew but documents in local, regional and academic libraries throughout the country. It directed me to a number of early modern surveys relating to the North Wood, written in secretary hand on often creased and grubby paper or parchment.

The earliest I was able to find is a terrier (from the French registre terrier, or land register) of the manor of Croydon conducted in 1492 on behalf of the then Archbishop of Canterbury, John Morton. The manor had been a possession of the Archbishops since the Norman Conquest, so much of the documentation concerning its affairs is held at Lambeth Palace Library, which proved a rich source of information. This survey, however, along with two updates of 1517 and 1543, had become detached from the main archive. It was most likely kept at the archbishops’ palace at Croydon, and was among the papers thrown out after the bishoprics of England and Wales were abolished during the Civil War and the palace leased to the Parliamentarian general Sir William Brereton. Morton’s survey then disappeared for centuries until it turned up in the catalogue of the antiquarian bookseller Bernard Quaritch in 1923, where it was spotted by a Croydon librarian who persuaded the council to buy it. The document is now in the Museum of Croydon.

Since the purpose of the survey was to record the acreage held by each tenant and the rent due, the North Wood, which was directly managed by the archbishopric, did not fall within its scope; but because several of the tenancies bordered the wood, the terrier mentions it several times, giving a fair idea of its extent, and records (often for the first time) place names still in use today.

Morton’s surveyors proceeded north from Croydon along the London Road, before turning east into Green Lane. To their north, they recorded an ancient estate of 120 acres “in landes called Biggynge,” and a little further on a farm of 10 acres on “land called Beawley.” Beyond it, one Henry Burton held 60 acres “upward toward the common called Norwood.” Morton’s men continued along what is now Thornton Heath High Street before turning north up Whitehorse Road. On the high ground to their left lay the densely wooded Manor of Whitehorse; the oaks of Grangewood Park, which occupies part of the former estate, still tower over Whitehorse Road today. The surveyors then turned east across Croydon Common to Long Lane, where they recorded 11 acres of “lande & woodgrounde buttinge on Longheath Lane,” leased to a Mr Heron; this may be the earliest reference to Long Lane Wood, another surviving parcel of this ancient woodland. From there, they returned to Croydon via Lower Addiscombe Road.

In 1552, Archbishop Thomas Cranmer commissioned a new survey of the “utter boundes of the mannor of Croydon” that contains significant topographical detail about the North Wood. It too was separated from the archiepiscopal records, and eventually came into the possession of the clergyman and church historian Thomas Tanner (1674–1735), who bequeathed his vast collection of manuscripts to the Bodleian Library at Oxford, where the document remains.

Cranmer’s surveyors, Leonard Perpointe and Thomas Tailour, “to gether with certayn anceante men as well of the Lordshipp of Croydon and also of divers parrishes adioyning,” made the circuit of the manor on the 3rd and 4th of May 1552. They started west of Croydon town by an elm tree beside the mill at Waddon, and made their way clockwise around the manor boundary, turning southeast into the North Wood. Here, it seems, the surfaced road petered out, for the surveyors advise their readers to follow the “most used way” for three-quarters of a mile to High Cross – presumably a boundary tree.

From there, they proceeded another half-mile to the Vicar’s Oak. This important boundary tree marked the point where the parishes of Lambeth, Camberwell, Croydon and Battersea met on Norwood Hill; its site is now marked by a plaque beside the gate of Crystal Palace Park. The immense oak could be seen from ten or twelve miles away and even, according to one observer, from Harrow-on-the-Hill, 17 miles to the northwest on the far side of London. From here, they continued south to Penge Corner and along the ditch that marked the boundary between Kent and Surrey, before bearing southwest to return to their starting point at Waddon Mill.

To the north of Croydon lay the hamlet of Penge, a detached portion of the manor of Battersea. Covering just a square mile and shaped like a drawstring bag, it lay seven miles from its parent manor. A 1605 survey of Battersea (now held by Wandsworth Heritage Service) includes a perambulation of “The Mete and Bounde of the hamlett of Penge,” a circuit of just over four miles that the surveyors could have walked comfortably in a day. It too provides valuable topographical detail, including the place names Rock Hill and Low Cross, which are still in use in the area. Where it follows the border with Croydon, it corresponds closely to Cranmer’s survey, recording the Shire Ditch that formed the boundary between Kent and Surrey and the “Greate Oake called Vicars Oake… at the partinge of the parishes of Croydon, Lambeth and Camberwell.”

Along with maps, court proceedings and the records of woodland management kept in Lambeth Palace Library and the Dulwich College Archive, these surveys enabled me to establish the former extent of the woods, locate its erstwhile divisions and landmarks, chart its early history, and create the map that illustrates this post.