Michael Hogan is an historian and the author of 26 books including Abraham Lincoln and Mexico. He is a former professor of international Relations at the Universidad Autonoma de Guadalajara and Emeritus Humanities Chair at the American School Foundation of that city. 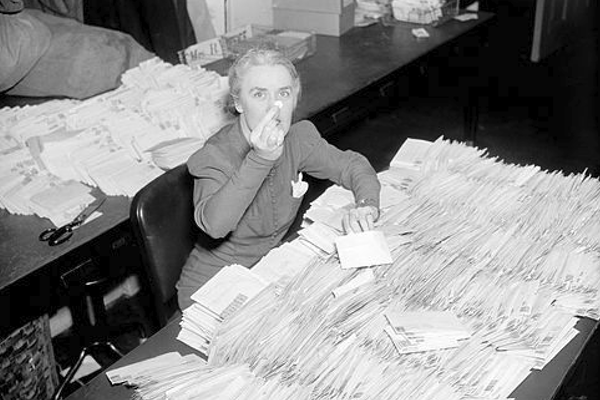 Missy LeHand, FDR's personal secretary, photographed with cards containing dimes, mailed by citizens to the White House to kickstart research that would lead to the polio vaccine.

The sorrowful chorus, “never before in our history,” seems to be invoked during every major crisis. As if, for this generation, each new challenge is unique to this day. Subsequently, all solutions must come from the present, there are no guideposts from history that can help us. Like us, it is believed, our forebears just muddled along trying to take care of themselves and their own families. Concern for others and even willingness to see our interdependence was beyond them, as well.

Thus, the Administration and now the CDC have decided that the most effective strategy in the COVID crisis is a booster shot, although reputable epidemiologists have already determined that without global distribution of vaccines the pandemic will continue, with new and more intractable variants proliferating. While the New York Times and other media agree, they also bewail the fact that no one has proposed a solution or suggested that history might suggest possible answers.

Although the pundits and media tend to dismiss the work of previous generations, we have been here before. John F. Kennedy noted in his inaugural address that “unless this country can help the many who are poor, it will not be able to save the few who are rich.” His inspiration for this remark was Franklin D. Roosevelt, who himself suffered from a debilitating disease.

In 1938 a devastating virus was paralyzing children, crippling adolescents, killing adults, and leaving many hospitalized in “iron lungs” (precursors of today’s intubation procedures). Roosevelt initiated a project called the National Foundation for Infant Paralysis (NFIP). Drawing on both public and private funding, the Foundation commenced an intensive effort toward developing a vaccine to prevent the virus from destroying tens of thousands, potentially millions, of lives. One of the grantees, Dr. Jonas Salk, finally discovered a vaccine and, grateful for the financial support and anxious to relieve the world of this plague, waived his patent rights for further financial benefit; thus, making it technically available for production.

Still, money for manufacture, field testing, and distribution was lacking. The President turned to the public with a tentative solution. Could millions of citizens, including children, contribute a small amount of money to get this project started? Volunteers responded by organizing thousands of chapters across the country in what was called the “March of Dimes.” Slotted cards were sent to schools and businesses, asking for 10 cents from each contributor. When the card was filled it would be sent to the White House. Within weeks the cards were coming in. Not only dimes, but quarters, fifty-cent pieces, and dollars; small amounts but they added up. There were 7 billion dimes alone, totaling 70 million dollars—equivalent to 1.2 billion today. The Depression still had its hooks in a large portion of the population who were worried about paying their monthly rent and food bills, let along helping to raise money for others. But they clearly saw that this virus was something that could potentially affect them and their children. The response was overwhelming.

The vaccine was licensed for universal use on April 12, 1955, and millions were vaccinated in a short period of time. Incidences of the disease fell from 10,000 cases a year to a few hundred, until finally polio was eradicated. It happened because of clear-headed leadership, sacrifice on the part of Dr. Salk, and enlightened self-interest on the part of the public, who were able to see that we are all connected. In the end, like those who sought to escape the plague in Poe’s “Masque of the Red Death,” we are all vulnerable and at risk if we do not look to see that our fellow human beings both at home and abroad are safeguarded as well.

Even as you read this, the Delta variant is likely being superseded by the Epsilon variant, which will be followed by a Gamma variant, all of which will travel tourist class from a lovely vacation spot abroad to a neighborhood near you and are likely to be resistant to booster shots or other temporary solutions.