Resettling Refugees is Harder than You Think – A Personal History

Ron Steinman spent 35 years at NBC. He was NBC’s Bureau Chief in Saigon during the Vietnam War. In 1975 he joined the Today Show, spending 11 years as a senior producer in Washington and New York, including covering politics and overseeing production of the Today Show’s live special weeklong broadcasts from China, Moscow, Seoul, Vietnam and overseas presidential trips. Steinman won a Peabody Award, a National Press Club award, two American Women in Radio & Television Awards, and has five Emmy nominations. 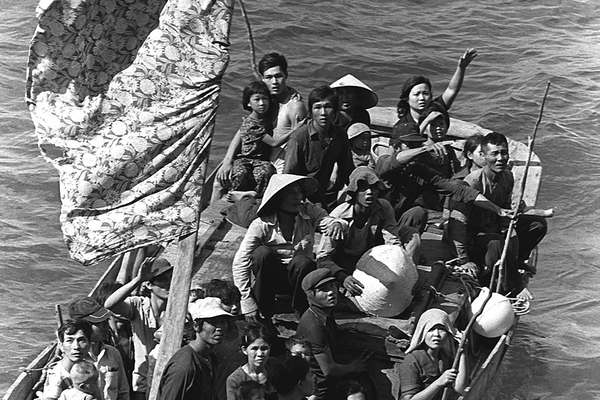 In the past I have written extensively for History News Network about my extended Vietnamese family, but I have never written about their settlement in America after the war and the new roots they established in the Washington, D.C. Metro area. Because of the politically contentious prospect of resettling large numbers of Afghan refugees in the United States today, here is an essay about The Family, as we in our family call them, and some truths about the trials and tribulations of helping refugees enter and start a new life in America. In retrospect, 1975 was not today. Afghans are not Vietnamese. Though the end of each war was chaotic, the circumstances of each war and how they ended are vastly different. Not everything I have written about the Vietnamese applies to Afghanistan but there are enough similarities that bridge what took place 46 years ago and what is happening today.

To begin. It seems as if it was only yesterday that I woke up on a weekday morning in the spring of 1975 with 21 Vietnamese refugees living in the large, finished basement of my sprawling house in Rockville Centre, N.Y. In reality, I admit, it was no surprise. They were my wife Josephine’s mother and father. Her three brothers. Wives. Children. Cousins. They were there because I brought them there—they had no other place to go. The war had finally ended in Vietnam. They had become America’s newest refugees.

Without doubt, they missed their home and their former way of life. As far as I could tell they experienced no permanent scars over the next years of their lives because they had left Saigon in a hurry. in time they made a success of their new lives. Many years later some of The Family returned to Saigon, then renamed Ho Chi Minh City, to witness a life they were glad to have missed while they were becoming successful and entrenched in Maryland and Virginia. To help them in America, my mother-in-law carried with her a half million Vietnamese piasters that immediately lost their value after the country fell. I still have the bills that are as crisp as they were when first obtained.

I helped get them out of Saigon as the country was falling to the North Vietnamese and Viet Cong. With my Vietnamese wife, Josephine, we were able to move them from the American government camps, usually US Army bases, where they had been patiently waiting for the freedom they knew they would have once they walked unimpeded on American soil. They wanted freedom badly enough to move as fast as they could from their homes in Saigon as the country collapsed into near chaos caused by marauding forces led by Hanoi in North Vietnam. Escape for them was difficult and harrowing but it was an easy decision for my family to make to travel thousands of miles into the unknown when the war ended. If, after escaping, they had any doubts of what they had done, they never expressed them to me.

Now that they were free, taking the next step into their new life was living in my basement. I suddenly had the role of the all-knowing big uncle whose job would be to resettle his family into a healthy, changed and meaningful life. But there were challenges to overcome that had no immediate answers or solutions. Though they wore blue jeans and sneakers of every make and brand, they were not us, meaning they were foreigners without a hint of what an American was back then, at least on the surface. My family was a curious mix of Catholic, Buddhist, and I, my wife and children, Jewish. That mixture in one family was usually enough to create problems in a Western household, but it meant nothing to these Vietnamese to have three different religions under one roof. So, what some may have considered a major problem would not get in the way of the family’s resettlement.

My family had lived in well-built houses in central Saigon. But they did not understand the modern conveniences as we knew them in America. They cooked with charcoal on brick stoves and in brick ovens. In my home we had the usual gas stove, a microwave and a tabletop oven for quick meals, toast and bagels or heating a pastry or muffin. We had a huge refrigerator. They knew almost nothing of refrigeration because they only had a mini model bought for them in the PX during my days in Saigon. We had to teach them how to use the stove and how to use the refrigerator.  For instance, close the door after using the fridge so the food stays cold and fresh. In Saigon, there was no cold to protect the food. A pot of rice was always out and open in the kitchen all day as family members filled a bowl of rice when hungry. Buying rice in 50-pound bags, we duplicated that need with great success to give our guests a taste of their former homes. To teach them how to use a stove meant telling them to turn off the gas when not in use, how to adjust the burners, and not to use matches to turn on the gas. They loved the washer and dryer we had in the basement and they learned how to use them effortlessly and frequently. With 21 people living together, washing and drying the few items they owned was necessary and important. Most did not speak very much English. I spoke almost no Vietnamese. It made communication and instruction that much more difficult but, with the help of my wife, who was a good linguist, we managed to muddle through because of the desire of the refugees to get everything right and to fit in as fast as they could.

Although we were new to the community, the people in Rockville Centre were very generous. There were many stories in Newsday about what we were doing. Every morning we found clothing and food on our doorstep in a meaningful effort to help us care for the new arrivals. I am not sure the same attitude would prevail today.

Soon, though, because of my work, we were on our way to Maryland and my new job as Washington producer for the Today Show. The 21 settled into my new home in Potomac, Maryland. Because of my industrious, hard -working and determined wife, Josephine, and a few of my contacts, she found them jobs as landscapers, in hotels and offices where they cleaned rooms and started working in kitchens. Thy eagerly accepted their new jobs and worked hard. They earned their own money and experienced how people lived outside the confines of my home. With money in their pocket, growing bank accounts, and more of my and Josephine’s continued tutorials in less than a year they were ready to rent their own homes and truly begin independent lives.

Granted, this is 46 years later and there have been enormous changes in the world. Forty-six years ago, Smart phones did not exist. The Internet did not exist. Laptop computers did not exist.  Social media did not exist. Movements fighting for freedom and equality were small, often underground and not very influential. Today, all those entities are real, powerful and difference makers with which the new refugees are familiar. The differences, however, are still great. Cultures often created around deeply conservative religious beliefs play a bigger role in societies that are very dissimilar to even our diverse way of life. Our customs are not better than that of the average Afghan refugee. They are different. We are not the same and we must recognize that, adjust and learn to live with the differences the new refugees bring to our shores as they must learn to adjust to us. Experience shows it isn’t easy. But beginning with shared humanity, it is possible.