Comparing Trump to Hitler is a Wrongheaded Distraction 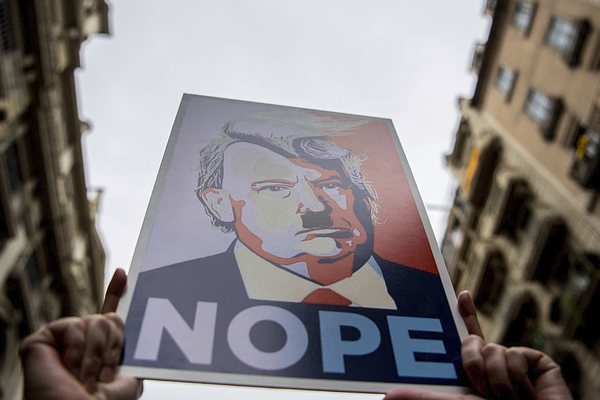 A Sharpie-drawn mustache embellishes Trump’s face on a poster. A Hitler caricature wears a MAGA hat. Satirists ridicule both of them. Academics ponder strong man analogies.  A new Netflix documentary pairs the Donald and the Führer. The similarities between the flamboyant leaders in critics’ crosshairs, however, blind us to a crucial contrast. Hitler, a charismatic leader, was also an astute politician. Trump channels his supporters’ mood, but lacks even the rudimentary ability to govern.

The differences begin with the different messages by which each attracted masses of followers. Hitler muted his rabid racism and promised to combat the Great Depression with massive government investment in social welfare, rearmament, and infrastructure.  The Trumpist GOP rejects big government and relies on white nationalism to sustain loyalists’ allegiance.

Adolf Hitler built a mass following by promoting economic and civic revival, not, at first, antisemitism. It’s comforting to associate good governance with liberal democracy.  A backward glance, however, alerts us to an inconvenient history.

To us, the virulence of Hitler’s Judeophobia is clear. It was not so obvious, however, to most of the approximately 30 percent of Germans who voted Nazi in the run up to Hitler’s takeover. A decade earlier, when Hitler was in prison after the ludicrous failure of his “beer hall” coup, he fulminated in Mein Kampf about Jews as “bloodsuckers,” “tapeworms” and “parasites,” who should “be exterminated.”  His delusional hatred roused party radicals, but hardly anyone read Mein Kampf, and the Nazi Party remained on the crackpot fringe. But after the 1928 election yielded only three percent of the vote, Hitler rebranded his public self from rebellious upstart to responsible leader.

The “new” Hitler raged against Bolshevism, the victors of World War I, and corrupt politicians whom he blamed for Germany’s ruin. He still celebrated “Aryan” superiority. But he mentioned Jews less often in public, and, when he did, his language resembled Henry Ford’s complaints about “destructive” Jewish influence in the media, the stock market, and the Soviet Union. In Germany, where Jews constituted less than one percent of the population, “the Jewish question” seemed like a side issue. More relevant to most voters were the Nazi Party positions on hot-button issues that were popularized by more than 100 mass-market pamphlets. In addition to these rather humdrum works, other genres, like young adult fiction, campfire poetry, a humor magazine, songbooks, and picture albums, contributed to the party’s mainstream sheen in the early 1930s.

To voters who boarded the Nazi bandwagon after 1928, Hitler presented himself as a capable outsider who pledged to end legislative gridlock, repel Bolshevism, fight joblessness with massive government expenditures, and expand the pensions and universal health care that Germans took for granted. As unemployment climbed to 30 percent between 1928 and 1932, voters went to the polls in five national elections and propelled the Nazi Party from ninth to first place. In January 1933 the German President appointed Hitler chancellor.  When arsonists set the Reichstag building ablaze, Josef Goebbels launched a propaganda blitz about a Bolshevik revolution that justified mass arrests of Marxist leaders. In mid-March, after more repression, tighter censorship, and negotiations with non-Nazi conservatives, the Reichstag voted to give Hitler dictatorial power.

Hitler consolidated Nazi power through bureaucratic incursions, media censorship, state-sanctioned concentration camps, banishment of rival parties and labor unions, and, in June 1934, the murder of violence-prone dissidents in his own party.  By late 1936 investment in government programs (including rearmament) revived the economy, and diplomatic successes boosted national pride. Only then, when his popularity was secure, did Hitler escalate the so-called “legal” persecution of Jewish Germans through stringent educational and occupational quotas, “Aryan oversight” of Jewish-owned businesses, and prohibitions against “mixed-race” marriages.

In short, Nazi voters mostly got what they wanted --  “Aryan” revival and a robust social state.  Few of them anticipated the November 1938 pogrom and the exterminatory war against “international Jewry” that gathered force with the invasion of Poland in 1939.

Hitler ended the depression in Germany with the kinds of federal programs the GOP rejects.  Although Trump promises “our historic, patriotic, and beautiful movement to Make America Great Again has only just begun,” his performance as president casts doubt on his ability to deliver material support to his core following, white families plagued by low wages, rising rents, and food scarcity.

President Trump defaulted on his economic populism and, instead, delivered a tax bonanza for the super-rich and bungled his response to the COVID-19 pandemic. In the thrall of super-wealthy donors, most Republicans in Congress reject Biden’s infrastructure program, which is supported by 83% of Americans, as well as higher corporate taxes to pay for it, supported by 66 percent of Americans. Without alternative proposals, Trump can only goad GOP lawmakers, “don’t let the Radical Left play you for weak fools and losers!”  After failing to overturn Biden’s election by bullying government officials and inciting mob violence, Trump falls back on promises to protect the status of white Christian Americans.

When Trump tells cheering crowds, “you are the real people, you are the people who built this country," he endorses the systemic racism that remains in place a half a century after civil rights legislation threatened to dismantle it. While denouncing federal regulation and social as well as infrastructure programs, Trump revs up white victimhood and relies on emotional gratification to sustain the loyalty of his aggrieved low-wage and middle class base.

Biden bets that voters will reward his administration’s effective COVID response, rapid economic recovery, and financial support for low-income families, which disproportionately benefits red state voters.  Unlike citizens in mono-ethnic Germany, whose political loyalties were influenced by class, white Americans’ allegiance is increasingly shaped by racial identity.  And historians note that white Southern voters tend to value preserving their privilege above federal programs like Medicaid expansion that benefit everyone. The Biden administration delivers effective governance. The Trumpist GOP, increasingly, is rooted in systemic racism dating back 400 years. Given the Constitution’s skewed distribution of power and a Supreme Court likely to uphold voter suppression, elections will be close.

Hitler built a mass following by promoting economic and civic revival, not the anti-Semitism that power would allow him to indulge. Trump, an incompetent would-be Führer, has released white rage.  If he were to vanish, his loyalists would remain on high alert.