New Discoveries Chip Away at Myths about Viking Shipbuilding

Nancy Marie Brown is the author of The Real Valkyrie: The Hidden History of Viking Warrior Women, coming from St. Martin’s Press on August 31. 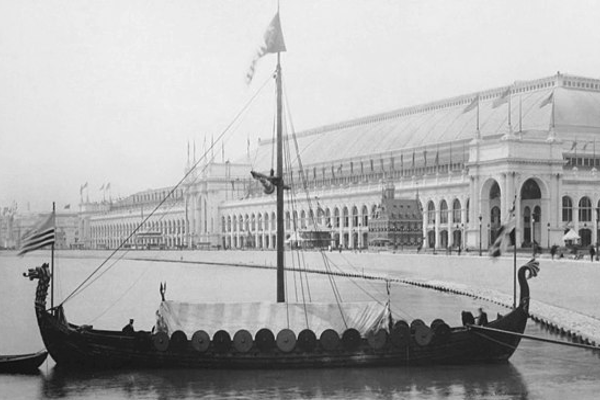 The "Viking," a replica of the recently excavated Gokstad ship is displayed at the 1893 Columbian Exposition in Chicago. Recent archaeology has deepened understanding of other ship designs made for coastal sailing and frequent portaging.

In the midst of World War II, with the Nazis extolling their Viking heritage, the Swedish writer Frans G. Bengtsson began writing "a story that people could enjoy reading, like The Three Musketeers or the Odyssey."

Bengtsson had made his literary reputation with the biography of an 18th-century king. But for this story he tried a new genre, the historical novel, and a new period of time. His Vikings are common men, smart, witty, and open-minded. "When encountering a Jew who allies with the Vikings and leads them to treasure beyond their dreams, they are duly grateful," notes one critic. "Bengtsson in effect throws the Viking heritage back in the Nazis' face."

His effect on that Viking heritage, however, was not benign. His story, Rode Orm, is one of the most-read and most-loved books in Swedish, and has been translated into over twenty languages; in English it's The Long Ships.

Part of the story takes place on the East Way, which the red-haired Orm travels in a lapstrake ship with 24 pairs of oars. Based on the Oseberg ship’s 15 pairs of oars or the Gokstad ship’s 16, such a mighty vessel would stretch nearly 100 feet long and weigh 16 to 18 tons, empty. To cross the many portages between the Baltic Sea and the Black Sea, Red Orm’s "cheerful crew" threw great logs in front of the prow and hauled the boat along these rollers "in exchange for swigs of 'dragging beer,'" Bengtsson wrote.

But Bengtsson's fiction burned itself into popular memory. Early scholars were convinced, too: A drawing of dozens of men attempting to roll a mighty ship on loose logs illustrates the eastern voyages in the classic compendium The Viking from 1966.

"Seldom has anything been surrounded by so much myth and fantasy" as the Viking ship, notes Gunilla Larsson whose 2007 Ph.D. thesis, Ship and Society: Maritime Ideology in Late Iron Age Sweden, has completely changed our understanding of the Vikings' eastern voyages.

In the 1990s, archaeologists attempted several times to take replica Viking ships between rivers or across isthmuses using the log-rolling method. They failed. They scaled down their ships. They still failed. Their ships were a half to a third the length of Red Orm's mighty ship. They weighed only one to two tons, not 16 tons. Yet they could not be cheerfully hauled by their crews, no matter how much beer was provided. The task was inefficient even when horses—or wheels or winches or wagons—were added.

We think bigger is better, but it's not.

The beautiful Oseberg ship with its spiral prow and the sleek Gokstad ship, praised as an "ideal form" and "a poem carved in wood," have been considered the classic Viking ships from the time they were first unearthed. Images of these Norwegian ships grace uncountable books on Viking Age history, uncountable museum exhibitions, uncountable souvenirs in Scandinavian gift shops.

But a third ship of equal importance for understanding the Viking Age was discovered in 1898, after Gokstad (1880) and before Oseberg (1903), by a Swedish farmer digging a ditch to dry out a boggy meadow. He axed through the wreck and laid his drain pipes. The landowner, a bit of an antiquarian, decided to rescue the boat and pulled the pieces of old wood out of the ground. His collection founded a local museum, but the boat pieces lay ignored in the attic—unmarked, unnumbered, with no drawings to say how they had lain in the earth when found—until 1980, when a radiocarbon survey of the museum's contents dated them to the 11th century. Their great age was confirmed by tree-ring data, which found the wood for the boat had been cut before 1070.

In the 1990s, archaeologist Gunilla Larsson took on the task of puzzling the pieces back into a boat. She had bits of much of the hull: of the keel, the stem and stern and five wide strakes, even some of the wooden rail attached to the gunwale. She had most of the frames, one bite, and two knees. About 2 feet in the middle of the boat was missing: where the ditch went through. The iron rivets had rusted away, but the rivet holes in the wood were easy to see and, since the distance between them varied, the parts could only go together one way. The wood itself had been flattened by time, but it was still sturdy enough to be soaked in hot water and bent into shape—the same technique the original boatbuilder had used.

When she had solved this 3D jigsaw puzzle, she engaged the National Maritime Museum in Stockholm to help her mount the pieces on an iron frame; the Viks Boat went on display in 1996. Then she created a replica, Talja, and tested it by sailing, rowing, and portaging around Lake Malaren. Talja glided up shallow streams, its pliable planks bending and sliding over rocks. With only the power of its crew, it was easily portaged from one watershed to the next, from Lake Malaren to Lake Vanern in the west, itself draining into the Kattegat.

A second Viks Boat replica, Fornkare, was built in 2012 and taken on the Vikings' East Way from Lake Malaren to Novgorod the first year, then south, by rivers and lakes, some 250 miles through Russia the second year. Concludes Fornkare’s builder and captain, Lennart Widerberg, "The vessel proved itself capable of traveling this ancient route" from Birka to Byzantium.

The Viks Boat is 31 feet long—longer than two earlier replicas that failed the East Way portage test—and about 7 feet wide, comfortable for a crew of 8 to 10. Its replicas passed the portage test for two reasons. First, they were built, like the original, with strakes that were radially split, not sawn. The resulting board is easy to bend and hard to break—at less than half an inch thick. The resulting boat is equally seaworthy at almost half the weight of the same size boat built with the same lapstrake technique, but using sawn boards. Empty, the Viks Boat replicas weigh only half a ton—about as much as a horse.

The second reason the Viks Boat replicas proved adequate for the East Way was that archaeologists had set aside Frans Bengtsson’s fantastical log-rolling technique for crossing from stream to stream.

By studying the ways the Sami had portaged their dugout canoes through the waterways of Sweden and Finland throughout history, the archaeologists began to see signs of similar portage-ways around Lake Malaren. They built some themselves and had teams race replica ships through an obstacle course of portage types: smooth grassy paths, log-lined roads or ditches (with the logs aligned in the direction of travel), and bogs layered with branches. A team of two adults and seven 17-year-olds finished a winding, half-mile course with Talja in an hour. When the portage was straight over 4-inch-thick logs sunk into the mud so they didn’t shift, the boat raced at 150 feet a minute.

The beauty of the Gokstad ship, its poetic quality, comes from its curves, the hull swelling out from the gunwale then tightly back in, making a distinctive V-shape down to the deep, straight keel. These concave curves improve the ship’s sailing ability at sea. But the keel cuts too deep to float a shallow, stony stream like those that connect the Baltic to the Black Sea.

Over a portage, even the minimal keel of the Viks Boat replicas needed to be protected with an easily replaceable covering of birch, as had been found on the original. The Old Norse name for this false keel was drag. To "set a drag under someone's pride" was to encourage arrogance.

Historians and archaeologists of the Viking Age have long benefited from an ideological false keel. With the Viks Boat taking its rightful place as an exemplar of the Viking ship, it's time to knock off that damaged drag and replace it. Says Larsson, "We should get used to a completely different picture of the Scandinavian traveling eastward in the Viking Age, one that is far from the traditional image of the male Viking warrior in the prow of a big warship."