Should Immigration Courts Operate under the Attorney General? History Says this is an Accident that Should be Undone

Alison Peck is Professor of Law, Director of International Programs, and Co-Director of the Immigration Law Clinic at West Virginia University College of Law. She is the author of The Accidental History of the U.S. Immigration Courts (University of California Press, 2021). 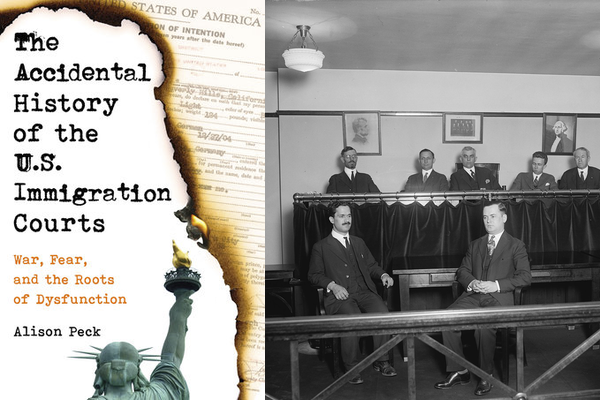 A Department of Labor Immigration Court in the 1920s. These courts would be moved under the supervision of the Attorney General in 1940.

Last week, Attorney General Merrick Garland vacated two controversial immigration decisions issued by attorneys general during the Trump administration. Those cases, Matter of A-B- and Matter of L-E-A-, had announced restrictive interpretations of the asylum laws for individuals fleeing domestic violence or gang violence against families. Garland’s actions set aside the Trump era decisions and announced that the underlying legal question would be considered by the Department of Justice (DOJ) and the Department of Homeland Security (DHS) in a rulemaking process ordered by President Biden in February.

While most immigration lawyers applauded Garland’s decision to return the parties to the status quo pending the rulemaking, the decisions raise a deeper question: Why are the attorney general and DOJ – the nation’s top law enforcement officer and agency – deciding immigration cases in the first place? Most Americans assume that the judicial power – deciding a case brought by the United States against an individual – will be exercised by, well, a judge. Since when did the nation’s top law enforcement officer have the power to act as judge and jury?

Since June 15, 1940, to be precise. On that day, Congress approved a plan proposed by President Franklin D. Roosevelt to move the immigration services into DOJ, placing them under the control and supervision of the attorney general. In making that move, Roosevelt was responding to the widespread fear of a “fifth column” – Nazi spies who looked like locals but, it was feared, would sabotage the country from within. In my book The Accidental History of the U.S. Immigration Courts: War, Fear, and the Roots of Dysfunction, I explore the history that led FDR to make that decision and the consequences it has for the immigration courts today.

Since the spring of 1939, members of Congress had been urging Roosevelt to move the Immigration and Naturalization Service (INS) to DOJ from the Department of Labor (DOL), where the immigration services had been housed since 1913. Under the attorney general’s control, they reasoned, INS could work hand in hand with J. Edgar Hoover and the FBI to detect, apprehend, and quickly deport spies. A young Albert Gore Sr., then a first-term congressman, wrote to FDR, urging that “the duties [of INS] relating to investigation, registration, apprehension, and criminology can be more efficiently performed by the Department of Justice.” Other members of Congress made similar entreaties.

Roosevelt faced a political dilemma. On one hand, his top legal advisors warned him against the move. After Roosevelt requested a study of the issue, a report by DOJ lawyers concluded that the move would be unwise, warning that it was dangerous to have the same agency administer both immigration and criminal laws. “To transfer the immigration service [to DOJ],” the authors concluded, “might well create in the public mind a confusion between immigration matters and criminal matters.”

One the other hand, the Department of Labor had become an increasingly uncomfortable home for the immigration functions of the government. Never a natural fit, the immigration services were placed in Labor at a time when Supreme Court skepticism of federal economic regulation left that department with very little to do. As labor-management tensions increased during the Depression, the Secretary of Labor faced a growing conflict of interest: Required to deal fairly with labor leaders, many of whom were immigrants, the Secretary was also required to evenhandedly enforce the immigration laws. Moreover, Secretary of Labor Frances Perkins – the first female Cabinet member in United States history – had come under increasing attack by members of Congress and the public who believed more labor leaders should be deported as Communists. An impeachment attempt against Perkins in the spring of 1939 failed, but it left Roosevelt trying to defend still-vulnerable New Deal legislation with a politically weakened Secretary of Labor.

Roosevelt sat astride this fence for more than a year. Then on May 18, 1940, the president met with Undersecretary of State Sumner Welles, just returned from a fact-finding mission to Europe to investigate the war situation. During that trip, Welles met on Roosevelt’s behalf with Mussolini, Hitler, and other Nazi officials, and the usually steely diplomat returned to Washington spooked by rumors that a Nazi fifth column had been responsible for the rapid fall of Western Europe. In a confidential memorandum, Welles advised Roosevelt that the immigration services should be moved to DOJ immediately to enable FBI, government lawyers, and the courts to cooperate in the removal of spies. Within days, Roosevelt complied.

The sad irony is that the “fifth column” was a hoax. Postwar research established that the Nazis rarely trusted anyone outside their inner circle and in June 1940 had recalled all spies from the United States. But propaganda minister Josef Goebbels exploited the “fifth column” rumors to cause fear and paranoia within the Allied countries. It worked in 1940 – and sadly, it has continued to work ever since through the immigration courts, which are still an office of the nation’s law enforcement agency, subject to the control of the attorney general and the changing winds of executive policies on immigration enforcement.

A reform movement gained steam in the 1990s, spearheaded by immigration judges themselves who daily felt the conflict between fair adjudication in the courtroom and the law enforcement mission of the agency. But that effort was overlooked after 9/11, when the nation once again turned its attention to border security. The most that could be accomplished by senators who favored immigration court reform was to keep the courts in DOJ while the investigation and prosecution of immigration violations moved to the new DHS.

After four years of executive policy restricting immigration, headlines now announce that the immigration courts face a backlog of 1.3 million cases. And controversial attorney general decisions like Matter of A-B- and Matter of L-E-A- have finally focused the attention of the public – and Congress – on a defect that has been quietly lurking in immigration law since the onset of World War II. Media reports indicate that the House Judiciary Committee’s Subcommittee on Immigration and Citizenship, headed by Representative Zoe Lofgren (D-California), is currently preparing a bill to create Article I immigration courts.

An understanding of history informs all contemporary questions of public policy, directly or indirectly. As Congress debates immigration court reform again in 2021, historical knowledge of how the current system arose is especially revealing. The immigration courts are located in DOJ not because of any reasoned judgment about sound public administration but because Roosevelt and his advisors, in a time of exigency, were duped by Nazi propaganda into a rash move that deliberately eroded the separation of powers and continues to challenge basic notions of fairness and impartiality today. Armed with this knowledge of history, citizens can act by encouraging Congress to create separate and independent immigration courts under their Article I powers, courts that are not controlled by law enforcement officials and can adjudicate immigration cases as justice demands.