A Celebrity Apology and the Reality of Taiwan 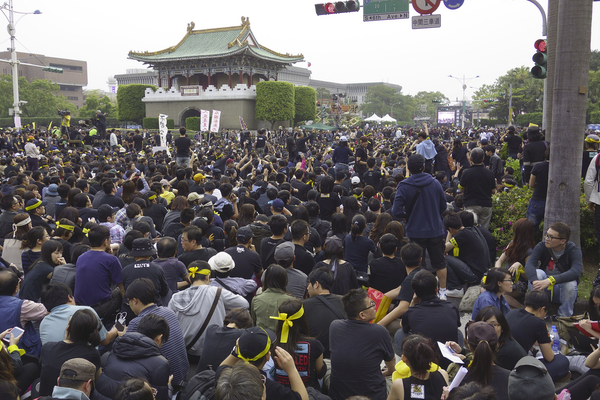 Students in Taipei protest a trade agreement with the People's Republic of China in 2014.

John Cena made international headlines this week while promoting his new movie, The Fast and the Furious 9. The professional wrestler turned action star referred to Taiwan as “the first country” where people would be able to see the film. Chinese citizens were outraged. Cena quickly issued a video apology, spoken in Chinese, for the “mistake.” The apology provoked another round of criticism. The reaction on social media and cable news was unforgiving, calling Cena everything from gutless to disgusting. I do not intend to join in the pile on. Cena’s had enough punishment for one news cycle.

However, underneath the scathing takes, lies an inconvenient truth: most Americans couldn’t find Taiwan, which sits in the East China Sea between China, Japan, and the Philippines, on a map, much less trace the origins of Taiwanese identity. Cena’s foray into international affairs provides an opportunity to examine the entrenched misunderstandings about the history of Taiwan at a time when the U.S., and the world, is paying attention.

The oft-repeated dictum that “Taiwan is an integral part of China’s historic territory” was not widely held within China in 1895, the year that the Qing Dynasty ceded Taiwan to Japanese colonization. The Chinese government did not begin to assert control over much of the island until the 1870s, and in 1895 officials expressed less interest in protecting Taiwan than other territories demanded by Japan. They were particularly interested in avoiding Japanese rule of Taiwan, but suggested to British and French diplomats that those countries could annex Taiwan. Within Taiwan itself, when given the option of remaining to live under Japanese colonialism or to move to China, less than 10,000 of Taiwan’s roughly 2.5 million inhabitants chose to make the journey across the Taiwan Strait. None of this indicates that Taiwan rose to the level of integral territory before the twentieth century.

During the 50 years of Japanese rule, the majority of those residents and their descendants came to think of themselves as Taiwanese, albeit in ways that reinforced divisions between indigenous and non-indigenous groups. Violent and non-violent resistance to the Japanese colonial regime remained a feature of Taiwan’s history, but it was couched in terms of preventing either encroachment into indigenous lands or the eradication of social and religious practices, and rarely if ever in the language of reunification with China. Taiwanese remained interested in China, of course, but as an ancestral homeland or a site for lucrative business activities. Instead, they developed new identities as Taiwanese and displayed them in calls for independence from Japan, drives for voting rights within Japan and an autonomous legislature for Taiwan, and a wide-range of social and cultural behaviors, from social work to religious festivals. All of these behaviors clearly distinguished them from the Japanese settlers and the colonial government that attempted to transform them into loyal Japanese subjects. Instead, they became Taiwanese.

That they had not remained Chinese—at least not as people in China defined that term during the early twentieth century—became very clear to everyone on the scene soon after the end of World War II. Members of the Nationalist Party and the government of the Republic of China (ROC), and Chinese popular opinion, had begun to speak of Taiwan as a part of China during the 1930s and 1940s, in the context of anti-Japanese sentiment and war. However, government officials and many Chinese settlers looked upon the Taiwanese as backwards people who had been tainted by Japanese influence. Those Taiwanese viewed themselves as having resisted Japanese assimilation and having built their identities in burgeoning modern metropolises and in relation to modern capitalist industries. Even though many Taiwanese began to study the new national language of Chinese, as they had Japanese, they felt no connection to the national struggles and heroes that they were told to embrace.

All of this was evident before 1947, when the separation between Taiwanese and Chinese came into high relief during the 2-28 Uprising and its brutal suppression by Nationalist Chinese military forces, and the White Terror that began soon thereafter. Decades of single-party rule under martial law by Chiang Kai-shek’s regime did not effectively instill most of Taiwan’s residents with a new sense of Chinese national identity. The ROC nevertheless continued Taiwan’s condition of political separation from China, a fact that has been in existence now for almost all of the past 126 years, and Chinese insistence on the idea of Taiwan as a part of China has failed to convince the roughly twenty-three million Taiwanese. Chinese views have been more effective in shaping international opinion, but they do not change Taiwan’s modern history or the reality that Taiwan is a country.

To close, the controversy surrounding Mr. Cena’s apology highlights two things: the power of ideas—in this case, the idea of Taiwan as a part of China—and the geopolitical and economic power of countries like China to shape opinions and actions both domestically and around the world.  People, companies, and countries should make their own decisions about what accommodations they are willing to make to do business with China and its citizens. But they should do so with an understanding of the history that lies behind and challenges such ideas.