Jerusalem: A Divided and Invented City

James A. S. Sunderland is a DPhil student at Merton College, Oxford where he holds scholarships from both the Arts and Humanities Research Council (AHRC) and Clarendon Fund. His work looks at Britain’s relationship with the Yishuv, the Jewish population of pre-state Israel. 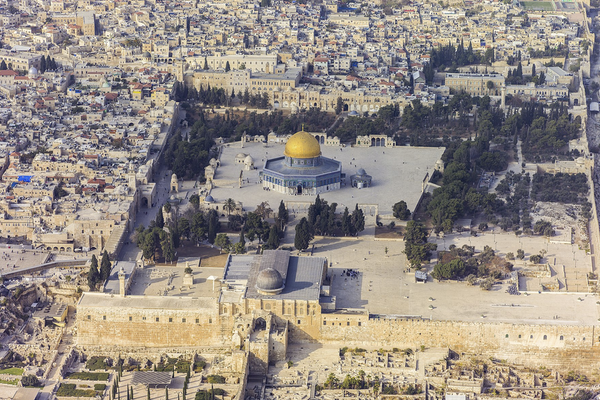 There are few cities on earth which can trigger the heights of passion and anger that Jerusalem can. The current round of violence between Israel and Hamas, the worst in recent years, is further proof of this. Israel’s decision to restrict access to parts of the Old City of Jerusalem during the month of Ramadan and evict several Arab families from the Sheikh Jarrah neighborhood, just north of the Old City, led Hamas to launch a series of rocket attacks on Israel far exceeding anything seen in the last bout of fighting in 2014.

Hamas, already frustrated by the cancelation of this year’s Palestinian elections by President Mahmoud Abbas (in which Hamas would have likely made significant gains), chose to escalate tensions and present itself as the dynamic, active party of Palestinian resistance to Israeli rule. This decision, combined with the Israeli response, has come at a horrific cost. Yet the leadership of Hamas have claimed their PR victory, being hailed by some as the ‘defenders of Jerusalem,’ while the leadership of the Palestinian Authority in the West Bank looks even more inert and impotent than ever.

In fact, the city that Hamas claims to be defending is, in large part, the invention of a British administration that ruled the city for just over 30 years from 1917 to 1948. Traces of the British Mandate are everywhere: from red post boxes on street corners, to the distinctive Armenian tiled street signs in the Old City – an invention of the city’s first governor, Sir Ronald Storrs, who saw Jerusalem more as an Orientalist arts and crafts project than the dynamic, multi-cultural and evolving city that it was.

Many of the divisions we see in Jerusalem today can be traced back to events following December 11, 1917, when General Allenby and British forces entered the Old City in their victory parade and proceeded to shape it into an Orientalist mirage, altogether detached from reality on the ground.

The dismembering of the Old City into Jewish, Muslim, Christian, and Armenian Quarters dates back, at the earliest, to the 19th century imaginations of Western visitors who noted the cross shape of the Old City, with two long roads running North-South and East-West dividing the city in four, and duly made their assumptions. These assumptions were deeply flawed.

Ashkenazi Jews would rent accommodation in the Christian Quarter, Muslims and Jews would live on the same streets in the Muslim Quarter, and people moved through the city with ease, interacting along complex networks tied to patronage, trade and class rather than along confessional or ethnic lines. Residents understood the city through their relation to their ethnically and religiously diverse localities or neighborhoods. Ya’akov Yehoshua, who grew up in the Old City during the first decade of the 20th century, reminisced that

Jews and Muslims shared residential courtyards. We resembled a single family and socialized together. Our mothers unburdened themselves of their troubles to Muslim women, who in turn confided in our mothers. The Muslim women taught themselves to speak Ladino. They frequently used the proverbs and sayings of this tongue.

Of course, we must not imagine that the city was an ethnically and religiously diverse utopia – it was not. Religious and ethnic prejudices were not absent from residents’ interactions. Nevertheless, people of all faiths and backgrounds rubbed alongside each other in the city, by and large without conflict.

After 1917, the western projection of a divided city was translated into a policy of segregation under the colonial power’s pre-existing assumptions about the existence of such divisions, and the belief that different ethnic and religious groups could not, and should not mix. It was a racial, confessional, and spatial policy divorced from reality. Indeed, so strong were existing identities that it wasn’t until the 1930s that the local population came to think of themselves as belonging to a “Jewish,” “Muslim,” “Christian” or “Armenian” quarter, by which time the British had cemented the idea into their administrative, construction and social policies.

The visual language of the city, as well as its communities, were also reshaped by the British. Britain viewed Palestine through a biblical lens. As Prime Minister David Lloyd George put it, “I was taught far more history of the Jews than about my own land. I could tell you all the kings of Israel.” British administrators strove to preserve this biblical city, so familiar to them from their Christian upbringings. This “preservation” was encoded in British infrastructure projects throughout the city and the building codes promulgated in 1918 by the Alexandria City Engineer, William McLean, brought to Jerusalem by Storrs. Building in the Old City was severely restricted, with new building encouraged only in the new city beyond. Even there, regulations meant buildings had to be low (so as not to obscure the Old City and Mount of Olives). There were to be no industrial buildings, and new buildings had to be faced in stone or other “approved material” matching the character of the Old City. It is hard to exaggerate the importance this last point. Storrs (who viewed the local stone as imbued with “a hallowed and immemorial tradition”) and McLean had set the character of modern Jerusalem, stretching far beyond the walls of the Old City. The “ancient” sandy stone was turned into Jerusalem’s visual language, one which the British permeated with religious and historical meaning, while other local building practices, not in keeping with the British view of the city, were banned.

Ahead of this May’s now cancelled Palestinian legislative elections, the competing parties revised, polished and released their logos. That of Hamas shows the Dome of the Rock at the centre, flanked by other parts of the Old City’s architecture. A banner in Arabic above states “Jerusalem is our promise.” Jerusalem is just over 75 kilometers (46 miles) away from Gaza, yet few residents or Hamas members will ever have visited it. But even for Hamas, besides the religious significance represented by the Dome of the Rock, it is the visual imagery of an “ancient,” sandy stoned city that they conjure in their mind’s eye when they think of Jerusalem.

Meanwhile, far-right Israeli desires to “reclaim” the city and expel Arab residents from the Old City and eastern part of the new city, have no basis in Jerusalem’s recent history. Muslims, Jews and Christians mixed, made business deals, lived and socialized together less than 100 years ago in the very streets which far-right extremists now claim exclusive right to.

The stylised image for both sides is a Jerusalem that was created, carefully moulded and “preserved” by the orientalist imaginations of British officials and administrative apparatchiks. The fight to be the “defenders of Jerusalem” is the fight over a sanitized, stylised image of a city which has been largely invented and whose divisions, cemented by years of British, Jordanian and Israeli rule, date back to 1917.

There is a glimmer of hope though. Although right-wing parties now control the majority of seats in the Knesset, Israel’s parliament, grass roots peace activists have long been fighting to bring Jews and Arabs, Israelis and Palestinians together in Jerusalem and to find ways, if not to solve the thorny issues surrounding Jerusalem’s future, then at least to learn to coexist and work together for a more peaceful future. Recent events have galvanized them and led others to come out and support their efforts. If divisions, mental and physical, can ever be dismantled, it will be through the work of ordinary people like these.