Review: Does "The Princess Spy" Pierce the Veil of its Subject's Fictions?

Robert Huddleston, the author of the novella LOVE AND WAR: A Father and Son in Two World Wars (2020), is a combat veteran of World War II and a researcher of wartime espionage. 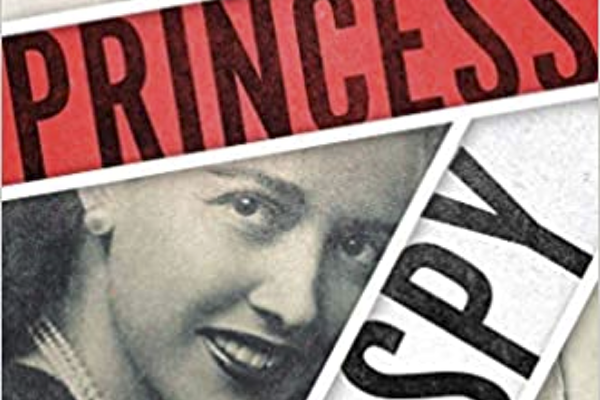 The Countess of Romanones, born Aline Griffith of Pearl River, NY filled her memoir The SPY WORE RED: My Adventures as an Undercover Agent in World War II with violent activities created to introduce her as a virtual "Jane Bond" of espionage when, in fact, she was a civil service clerk, grade 5 employed by the Office of Strategic Services (OSS), predecessor of today's Central Intelligence Agency (CIA). These violent activities assassinations, murders, wild car chases and the like, would have drawn the ire of Spain's dictator, Francisco Franco. Agents from both sides of the European conflict were allowed in "neutral" Spain provided they operated under conditions laid down by Franco: NO VIOLENCE.  One gunshot signaled a counter-revolution, a fear of all dictators.

THE PRINCESS SPY revisits Griffith’s memoir, with an eye toward separating truth from fiction. "The bigger question I wanted to answer," Larry Loftis noted in his preface, " was whether she fictionalized or embellished all or most of her exploits. If she did, I realized, I'd have to find another spy to write about." Loftis answered that question sufficiently to proceed, but with some reservation, acknowledging the sensational events in the memoir were  "historical fiction" but for one exception: a "bloody body" Aline discovered in her bed which she had to dispose of." Loftis believed the story. I do not. His so-called "confirmation" of the incident comes from the unpublished memoir of a co-worker, one hardly willing to call her a liar.

How, then, to establish what Aline Griffith actually did in wartime? During her first year in wartime Spain, Aline Griffith was employed as a civil service clerk, grade 5, trained to de-code messages passing through the OSS Madrid station. Off-duty she became a regular of Madrid's social life where occasionally she picked up information worth reporting to her superiors (pro -Germany Spain hosted thousands of Nazi agents as well as German businesspersons). Was this the setting for dramatic escapades?

This author’s book EDMUNDO: from Chiapas, Mexico to Park Avenue: The true story of a Mexican-American who became a World War II spy and married a German Princess (2007), which became a key source for The Princess Spy, offers a starting point through the story of OSS agent Edmundo Lasalle.

Following the D-day landings, attention of the OSS turned to PROJECT SAFEHAVEN, a plan "to prevent defeated Germany from sequestering loot and German gold in neutral countries" and "to prevent the escape of possible war criminals" through Spain and other "neutral" countries such as Portugal and Switzerland.

In 1943, President Roosevelt has established the Foreign Economic Administration  with wide-ranging responsibilities that would come to include Safehaven. Placed in charge was Samuel Klaus, assigned from the Treasury Department. In September 1944, Klaus, along with a representative of the State Department, met in Madrid with OSS officials to discuss details of what was to become PROJECT  SAFEHAVEN.

Edmundo Lassalle was assigned the lead OSS agent in executing this very crucial project-one that continued well-beyond the end of the Second World War.  In January of 1945, he was sent to London (with priority to travel on the PanAm Clipper) where he received training regarding SAFEHAVEN. He was joined by OSS agents from the newly created Art Looting Investigating Unit. The training kept him in (cold and boring, he wrote his wife, Emilie) London for a month. (My own research failed to establish a purpose for the London stay; Loftis’s research was more successful)

Also involved in this important project was Aline Griffith. Edmundo, however, soon shifted his attention to courting Princess Agatha Ratibor, divorcing his wife Emilie, and seeking permanent employment as the European Representative of the Disney Company. (As important as Project Safehaven  was, Edmundo used his  "home leave" to return to Washington to inform his wife of his desired divorce, then on to Hollywood to meet Walt Disney in an effort to remain on Disney's payroll as his European Representative.} Needless to say, government bookkeepers were puzzled as to how Edmundo could be employed by the OSS and the Disney Company at the same time. This became a troubling issue as his OSS service was terminated.)

The void in executing PROJECT  SAFEHAVEN,  created by Edmundo's shifting interests, was left to other agents including, so it seems, Aline Griffith. Loftis deals with this issue exceedingly well, plying OSS records not yet available when I was writing my biography of Edmundo Lassalle.

In July, 1945, following Germany's defeat, Aline was promoted to civil service grade 7 "Intelligence Agent," code name Butch.  Since the OSS was abolished on August 1, this newly appointed "secret agent" served but a few days executing PROJECT SAFEHAVEN. As I noted in my biography of Edmundo, however "In February 1945, Aline Griffith, OSS code name "Butch," submitted her first report to Secret Intelligence (SI) and her last report came on July 15, 1945," Why her promotion was delayed, and the results of her SI work, while she nominally was still working as a code clerk, remained to me unclear.

And we do know, this 22 tear-old former New York fashion model’s attention, at that time, was on Luis, a Spanish Count, reputed to be the wealthiest bachelor in Spain.

THE PRINCESS SPY is meticulous researched and well-written and might well become a bestseller. It is regrettable , however, that Loftis chose to write a "nonfiction biography" of Aline Griffith, aka the Countess of Romananos, especially having concluded that much of what she included in her memoir THE SPY WORE RED  was "historical fiction." One of Aline's secretaries in New York in the 1980s said the Countess, in private, referred to her memoirs as "factions," a blend of facts and fiction; or as Nigel West, the espionage expert concluded, "the product of her imagination.”

A FINAL COMMENT:  The historian Richard Hofstadter once noted that history is largely "a comedy of errors and a museum of incompetence." There is considerable evidence of that in World War II and, for the OSS, writ large. Much confusion, considerable waste, institutional mendacity and, as combat leaders proclaimed, minimal impact on the war's outcome. A condition, no doubt, that explains why President Truman abolished the OSS following the surrender of Japan. Concurrently, it should be noted, our military was recruiting well-trained and experienced secret agents who earlier served Adolf Hitler.  And, as early as 1947, the OSS was re-born as the CIA, destined to add torture as a means of producing intelligence.