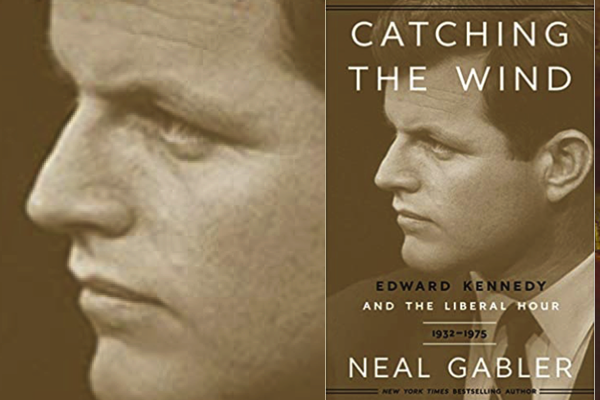 During the past 12 years, the U.S. Senate under Mitch McConnell has served as a black hole for progressive legislation, so it is hard to imagine that the upper house was once an engine of major social reform. But in the “liberal hour” of 1964-68, the Senate passed a historic series of bills that continue to impact us 50 year later, including Medicare,  the Civil Rights Act of 1964, the Voting Rights Act, the Motor Vehicle Air Pollution Control Act, the Water Quality Act, the legislation creating the National Endowment of the Arts, and major immigration reform.

Neal Gabler, in his new biography of Ted Kennedy, contends that the Massachusetts senator was a key player in getting these historic pieces of legislation passed.  He claims that Kennedy had “the most significant legislative career in American history,” sponsoring 2,552 pieces of legislation, some 700 of which became law.

Although his two older brothers, slain in their youth, are today held as liberal icons, with schools and scholarships named in honor, in Gabler’s view, it is Ted who racked up the most accomplishments. He notes that a posthumous Time magazine story labeled Ted as “the brother who mattered the most.”

Catching the Wind is the first of a two-volume biography and it covers the years 1932 – 1975. Ted Kennedy’s challenges started out at birth, since he was the youngest of eight children and an “unexpected afterthought.” His mother Rose, fatigued by decades of child-raising, paid little attention to him as she shuttled between houses in Massachusetts and Florida and made shopping trips to Europe.

Young Ted attended a dozen schools before graduating from prep school and entering Harvard University in 1950. Here he hoped to follow in the footsteps of his two brothers by playing on the football team, however, he was caught cheating. Ted had asked a friend to take a difficult Spanish exam for him, but a teacher spotted the fraud and both young men were expelled from the university.

Ted eventually redeemed himself by serving in the Army (but not in combat) and being allowed to re-enroll in Harvard, graduating in 1956. He went on to graduate from the University of Virginia Law School and in 1958 served as a manager of his brother Jack’s 1958 Senate re-election campaign.

The Harvard cheating episode was an early indication of a troubled young man and in later years, Senator Kennedy would be the subject of many salacious tabloid stories for his adulterous affairs and embarrassing drunken antics at Washington D.C. restaurants.

While other biographies, notably Burton Hersh’s Edward Kennedy, An Intimate Biography have explored these dark chapters in Kennedy’s life in detail, weighing their causes and impacts, Gabler treads a careful path around this material. The many infidelities that humiliated his first wife, Joan Bennet, are barely mentioned.

Gabler does suggest that Ted acted recklessly because “the only times that (he) was in control of his life, the only times that he could escape the prison of his family, were those times when he was out of control…Ted Kennedy felt so unworthy that he had to demonstrate his unworthiness.”

Having offered this explanation, Gabler avoids any further exploration of the youngest brother’s self-destructive behavior. Instead, he offers an in-depth, bill-by-bill explanation of Ted’s legislative career.

When Ted arrived in the Senate in 1962 to serve in JFK’s old Senate seat, the institution was nearing the end of a thirty-year partnership between the Democratic “old bulls” of the segregationist South and northern, pro-labor liberals. This partnership, facilitated by Franklin Roosevelt, passed most of the New Deal legislation in the 1930s.

When Ted was named to the Senate Judiciary Committee shortly after his arrival, he ingratiated himself with the chairman, James Eastland (D-Mississippi), a white supremacist and old bull leader. He solicited Eastland’s advice, playing on the elderly man’s vanity, and was soon admitted to the “private drinking club” held in Eastland’s office every afternoon.

In 1964, Lyndon Johnson was elected to the presidency in a Democratic landslide. The 89th Congress contained lopsided Democratic majorities: 295-140 in the House and 68-32 in the Senate.  Although LBJ’s name was on the ballot and not JFK’s, Gabler attributes the sweep to Jack Kennedy, because “nothing may have so liberalized the country as the shock of his death.”

The election of Johnson and the new, larger Democratic majorities marked the demise of the Senate old bulls. Not only were their votes no longer essential to passing legislation, President Lyndon Johnson, a former Senate majority leader, knew how to undercut their power by going around them, or, if necessary, harassing and intimidating them.

While Johnson had maintained a guarded loyalty to John F. Kennedy, he had long hated his younger brother, Robert (a feud that has been documented in several books).

LBJ, however, liked “young Teddy” (as he called him), believing he was a “good” person. Johnson told his close aides that Ted “had the potential to be the best politician in the whole family.” Johnson often called Ted after a major speech to compliment him.

Supported by large majorities, the Johnson Administration was able to pass 84 major pieces of legislation in the next four years, “the largest program of social engineering since the New Deal,” according to Gabler.

It is this brief period of Democratic Party dominance that Gabler calls the “liberal hour.”  It certainly was liberal and, in historic terms, it lasted just about an hour, since the country took a turn to the right with Richard Nixon’s election in 1968.

During the four years of Democratic executive and legislative dominance, Kennedy was able to “catch the wind,” riding the burst of liberal enthusiasm to establish himself as an important leader in the Senate.

Although Ted, as a first-term senator, lacked seniority, he wielded great influence because he was JFK’s younger brother.  Although Ted lent his support to a number of key bills including Medicare and the Voting Rights Act, it was on immigration reform that he really made an impact.

Ted represented Massachusetts, a state “shaped by immigration,” and he soon identified the issue as one he wanted to champion. Although the Immigration and Nationality Act of 1965 was labeled The Hart-Cellar Act, Ted Kennedy was the senator most responsible for its passage. The bill replaced immigration quotas first adopted in the 1920s that discriminated against Southern Europeans and Asians. The new law promoted “family unification” with a provision exempting immediate relatives of U.S. citizens from numerical restriction. Although it was not foreseen at the time, this soon led to “chain migration,” a behavior that would completely reshape patterns if immigration in the coming decades.

The “liberal hour” ended abruptly with the election of Richard Nixon in 1968. According to Gable, Nixon “lived in terror of a Kennedy restoration — terror that Ted Kennedy would do to him what Jack Kennedy had done before.” This fear led Nixon to pre-empt many of Kennedy’s proposals by introducing his own conservative versions (e.g. health care reform) that withered without support. The obsession with Ted Kennedy also led him to create an extensive surveillance network to monitor the Democratic Party leaders, including Kennedy. This led to the creation of the “plumbers,” the secret group that would get caught in the Watergate break-in.

No biographer of Ted Kennedy can overlook the night of July 18, 1969 when the senator drove off a bridge on Chappaquiddick Island, killing campaign volunteer Mary Jo Kopechne.

In Gabler’s rose-colored view of Ted Kennedy, the senator bore little responsibility for the tragedy. According to Gabler, the whole mess was the fault of Joey Gargan,  a Kennedy cousin and Boston-based attorney who handled many of the family’s legal matters.

Gabler states that it was Gargan who arranged for the six young women, the campaign volunteers known as the “boiler room girls,” to come to the beach house on Chappaquiddick Island. It was Gargan who drove Kennedy’s Oldsmobile over to the beachfront cottage earlier in the day (Kennedy arrived separately after a yacht race) and Gargan who supplied the cases of scotch, rum and beer for the party and Gargan who grilled the steaks.

In Gabler’s view, Kennedy had not wanted to attend “Gargan’s party,” and only came because he felt obligated. When he got into the Oldsmobile with Kopechne, he was just tired, not drunk. The accident could have happened to anyone, drunk or sober, because the wooden bridge was narrow, unlit and lacked guard rails. After the car landed upside down in the water, Kennedy tried several times to get Kopechne out of the car, but was “swept away” by the current.

In his account of the tragic evening, Gabler relies largely on Ted Kennedy’s own words: his statements made at the time inquest and the version of events he presented later in his posthumous memoir True Compass.

Gabler ignores a number of other accounts of the incident, notably statements by public safety officials who said Kopechne probably survived up to an hour in an air pocket. Nor does he give an adequate explanation for Kennedy’s delay in reporting the accident. By the time Ted walked into the police station at 10 a.m. the next day, the police had already pulled the car out of the water and recovered the body.

Gabler does a disservice to his readers by trying to minimize Kennedy’s responsibility and placing the blame on Gargan, a loyal aide who spent his whole career trying to serve the family.

Kennedy, of course, went back to serve in the Senate. By 1972 his reputation had recovered sufficiently that he a number of Democratic leaders begged him to run for president in the race against President Nixon. Kennedy wisely turned them down, believing it was “too soon” after Chappaquiddick and that he would be better position in future years.

The book ends in 1974, when Gerald Ford ascended to the presidency after Nixon’s resignation. Gabler is now working on a second volume to cover Kennedy’s career from 1975 to 2009, which would include his run against President Carter for the 1980 Democratic nomination.

Gabler, the author of six previous books including An Empire of their Own: How the Jews Invented Hollywood, is a talented writer with keen eye for the telling anecdote.  The book generally moves along at a brisk pace, occasionally getting bogged down in the complicated maneuverings of the U.S. Senate. Readers who are fascinated by the Kennedy family will find value in its detailed accounting of the youngest brother’s legislative achievements.  Those looking for a more detailed examination of the senator’s many lapses in judgement and the Kennedy’s family efforts to cover them up, will be disappointed.