Jeff Rogg is a postdoctoral fellow in the National Security Affairs Department at the U.S. Naval War College. Jeff received his PhD in history from The Ohio State University in December 2020. His dissertation, The Spy and the State, is a complete history of American intelligence from the Revolutionary War to the present. The views in this article are the author’s own and do not represent the views of the U.S. government, Department of the Navy, or U.S. Naval War College. Twitter: @ThespyThestate 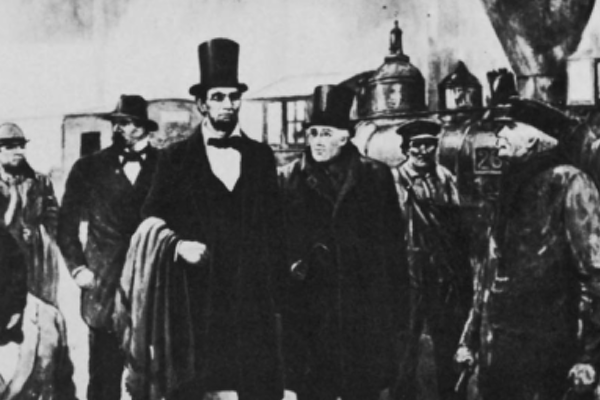 News has emerged that President-elect Biden will no longer be taking Amtrak to the presidential inauguration due to security fears. This sad state of affairs is yet more evidence for Mark Twain’s axiom, “History doesn’t repeat itself, but it often rhymes.” In 1861, President-elect Abraham Lincoln was forced to change his itinerary as he took the train from Springfield, Illinois to Washington, D.C. for his inauguration.

The details of the plot to assassinate Lincoln on his journey emerged in the memoirs of one of the most famous spies of the Civil War, Allan Pinkerton. Pinkerton was the founder of the detective agency that still bears his name and gave detectives the popular name “private eye,” due to the company’s logo of a single eye with the slogan “We Never Sleep.” Coincidentally, Pinkerton and his detective agency came to prominence in the 1850s by solving train robberies.

In 1861, the railroad was the only reasonable means of conveyance to take the President-elect to Washington, D.C. The journey for Lincoln would be a perilous one. The presidential election of 1860 had torn the country apart. Lincoln would have to travel through territory harboring potentially violent secessionists. Pinkerton relates that Samuel Felton, the president of the Philadelphia, Wilmington, and Baltimore Railroad, urgently requested his presence in Philadelphia. Felton had heard rumors that secessionists planned to destroy the ferries that carried trains across the Susquehanna River at Havre de Grace or to target other railroad bridges along the President-elect’s potential route.

Pinkerton writes, “At the city of Wilmington, in Delaware, I found evidence of great political excitement,” although no indication of a violent plot in the city. Incidentally, President-elect Biden had hoped to begin the journey to his inauguration from Wilmington before security concerns derailed his plan. Returning to Pinkerton, the detective noticed that hostility towards President-elect Lincoln grew the closer he got to Baltimore. It was there that Pinkerton believed he found evidence of a plot against Lincoln’s life.

To uncover the conspiracy and protect the President-elect, Pinkerton assembled a team of agents. Among the team were two women, Kate Warne and Carrie Lawton (aka Hattie Lawton or Lewis). Pinkerton praised their intelligence work, calling Warne “eminently fitted for this task.” Through his agents, including Warne, Pinkerton unraveled the plan. The secessionists had conspirators posted in all the cities along the President-elect’s route to report any changes to his itinerary. They communicated with a cipher to avoid detection. The plan was to kill Lincoln at the Calvert Street Station in Baltimore. A crowd would cause a disturbance during which the assassin would strike. According to Pinkerton, even “policemen were in active sympathy with the movement.” Pinkerton returned to Philadelphia and discussed the plot with Felton ahead of Lincoln’s arrival the next day. When Lincoln arrived, Pinkerton revealed everything to the President-elect, and, as Pinkerton writes, “a shade of sadness fell upon his face.”

In response to the plot, Lincoln’s inner circle decided to change his itinerary and cut the telegraph lines when Lincoln traveled to Harrisburg to prevent the conspirators from communicating. Special trains would take Lincoln first from Harrisburg to Philadelphia and then from Philadelphia through Baltimore and onto Washington, D.C. Kate Warne procured half of a sleeping car that would be curtained off from the rest, so no one would know Lincoln was on the Philadelphia train. Lincoln successfully reached Washington, D.C., and Pinkerton records that “a general sentiment of rage and disappointment pervaded the entire circle of conspirators.” Pinkerton concludes the account, exclaiming “I had informed Mr. Lincoln in Philadelphia that I would answer with my life for his safe arrival in Washington, and I had redeemed my pledge.”

The so-called Baltimore Plot is the subject of historical dispute. Pinkerton did not always provide the most reliable intelligence: he joined his friend General George McClellan in grossly overestimating the number of Confederate troops at Antietam. Moreover, Pinkerton’s intelligence work during the war took on a more dangerous, undemocratic character when he actually spied on Lincoln on behalf of McClellan. Pinkerton believed McClellan was the only general who could really defend the Union and that McClellan’s political enemies were pressing Lincoln to dismiss him. He wrote his memoir to help rehabilitate his and McClellan’s image following the war. The memoir also helped advertise the Pinkerton Detective Agency. It is entirely likely that the Baltimore Plot is an embellishment, if not an entire fabrication, of historical events.

The chaos and unrest of the past few weeks—indeed years—have created a new window for American historians to enter civic debate. The Civil War has become a popular, but ominous, historical analogy. Unfortunately, the decision to cancel President-elect Biden’s journey by rail from Wilmington to Washington, D.C. cuts a little too close to a moment from that tragic period of American history. Like Lincoln, President-elect Biden will assume the presidency of a bitterly divided nation. Hopefully, the historical analogies stop there. Americans everywhere wish President-elect Biden a safe journey to the capital.