Worst Pardon Ever? You'll Be Surprised 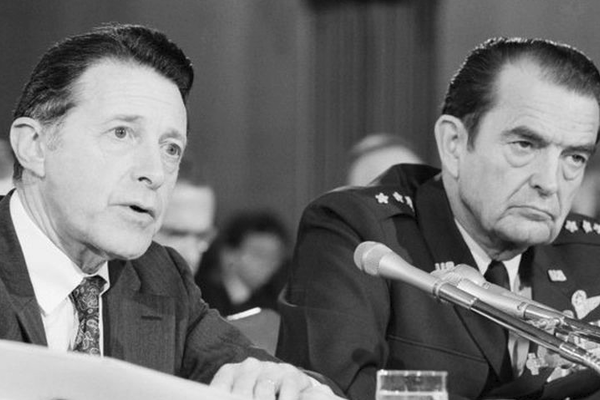 Caspar Weinberger (at left, photo 1982) served as Secretary of Defense in the Reagan administration and was pardoned in 1992 by George H.W. Bush prior to trial for crimes he allegedly committed during the Iran-Contra affair.

Political Pundits and television talking heads have been speculating widely and wildly about who Donald Trump will pardon before he leaves office on January 20, 2021. Will he pardon Rudy Giuliani? Paul Manafort? Steve Bannon? His children? Himself?

It is customary for an outgoing President to grant 11th hour pardons, sometimes to surprising recipients. But Donald Trump is anything but customary, and thus that pardon-guessing game offers a goldmine of interesting and in some cases alarming speculation regarding who and why.

This Christmastime gift giveaway shows us just how valuable a presidential get-out-of-jail card can be. Plus it gives a president opportunities to accomplish multiple personal and political goals.

Of course, not all presidential pardons are created equal. To be sure, justice and mercy are worthy and occasional goals. But the end-of-term pardons often reveal other, less savory objectives. Some pardons seem to be given in exchange for money (directly or as tax-free donations to a presidential library fund or other cause of interest for the outgoing president), some to settle scores, some to reward partisan loyalists.

The president’s pardon power is broad and derives from the U.S. Constitution. The only two areas where the pardon power is forbidden are a) in cases of impeachment; and b) for state, rather than federal, offenses. The question of a pardon prior to an indictment or finding of guilt was decided in the case of the Nixon pardon in 1974, when Gerald Ford granted his predecessor a “full, free, and absolute pardon” even before Nixon was charged formally with a crime (he was, however, named an “unindicted co-conspirator” in a criminal case that landed several people in his administration in jail).

The intentions of the Framers of the Constitution gave the newly invented president the pardon power to ensure justice and, as Alexander Hamilton noted a few years after the adoption of the Constitution, “restore domestic tranquility of the commonwealth.” But not every Founder was in support of giving the president this absolute power. George Mason, a convention delegate from Virginia, warned that a president might “make dangerous use of it” by pardoning crimes in which he might be a co-conspirator.

The early pardons were indeed used to ensure mercy and to quell hostility towards the new government, which was in the early stages of gaining legitimacy. But it wasn’t long before the pardon power met with controversy.

James Buchanan, the president who presided over the pre-civil war breakup of the union, pardoned Brigham Young and other Mormons who had been involved in revolutionary acts against the government in the Utah territory. Buchanan was justly concerned that Young and the Mormons intended to break away from the U.S. and form their own “theocratic nation.” As part of a compromise, Buchanan delivered pardons and Young and his followers ceased their revolutionary activities.

Just after the Civil War, Andrew Johnson issued a Christmas Day 1868 pardon to most Southerners.  Johnson wanted to go easy on the Confederates, while members of Congress called for punishment against the rebels.  To make matters worse, Johnson pardoned Dr. Samuel Mudd, who helped John Wilkes Booth escape. It all became too much, a great backlash occurred, and Johnson lost virtually all support from Congress en route to being the first impeached President.

In 1921, President Warren G. Harding pardoned Socialist leader Eugene V. Debs. Debs had run for president several times, even getting nearly a million votes in 1920, but called on Americans to resist the draft in World War I. Debs was imprisoned and even ran for president from prison, his fifth and final run at the White House. Harding granted Debs a full pardon, which ran against popular opinion.

On Christmas Eve 1971, Richard Nixon pardoned labor boss Jimmy Hoffa, who had been convicted of fraud and bribery. Nixon was trying to woo labor voters to the Republican Party, and openly courted Teamsters prior to his 1972 bid for reelection. Hoffa disappeared four years later following a meeting with known members of the mob. In 1982 he was legally declared dead.

To many, Gerald Ford’s pardoning of Richard Nixon ranks as the worst ever. Ford was suspected of agreeing to a deal with Nixon that called for Nixon to resign in exchange for a pardon. Over time, the consensus view is that there was actually no deal, and Ford granted Nixon a pardon to both “get Watergate behind us,” and out of concern for the health of the former president.

Other modern questionable pardons include Jimmy Carter’s pardon for all those who evaded the draft during Vietnam War, Bill Clinton’s pardon for his half-brother Roger, who was convicted on drug charges,  Clinton’s controversial pardon of donor Marc Rich, who had been convicted of tax fraud (Rich’s ex-wife was a mega-donor to the Democratic Party), George W. Bush’s pardon of Lewis “Scooter” Libby, the former chief-of-staff to Vice President Dick Cheney who had been convicted of perjury and obstruction for lying about the outing of CIA agent Valerie Plame,  Barack Obama’s pardoning of Private Chelsea Manning, who was convicted of releasing classified documents, and Donald Trump’s pardon of Sheriff Joe Arpaio, who was an anti-immigrant Arizona official who supervised harsh treatment of immigrant detainees under inhumane conditions. Other notable Trump pardons include one for Mike Flynn, his National Security Advisor, who lied under oath, and former Navy Seal Eddie Gallagher, who was convicted of committing war crimes.

The only person NOT to accept a presidential pardon was George Wilson, who in 1829 was found guilty of robbery of the mail. Without giving an explanation, Wilson refused the pardon. The Supreme Court finally rendered a judgment on this and ruled that it was Mr. Wilson’s right to reject a pardon. He was executed by hanging not long afterward.

By the numbers, modern presidents have varied widely in the number of pardons they granted. FDR (who was elected four times) granted the most (2,819). His successor Harry Truman was also pardon-happy, issuing 1,913. Ike granted 1,110. From then on, presidents greatly reduced the number of pardons granted. In descending order, Kennedy issued 472, Clinton 396, Reagan 393, Ford 382, Obama 212, GW Bush 189, and GHW Bush 74.

Perhaps the most intriguing pardon was by Harry Truman, who in 1952 commuted the sentence of Oscar Collazo, who tried to assassinate Truman over the issue of Puerto Rican independence.

Is Donald Trump contemplating, and could he issue, a self-pardon? On June 14, 2018 he announced “I have the absolute right to pardon myself.”  But can he do so legally?  It is unclear, as no president has ever issued a self-pardon (none felt the great need to), so it has never been tested in court. The two central problems of a self-pardon are 1) that it allows someone to be the judge in his own case; and 2) that it puts a president above the law. A self-pardon violates both of these essential elements of our jurisprudence. The closest thing we have to a judicial precedent stems from 1974, when the Department of Justice issued a memorandum on this question. The acting Deputy Attorney General Mary C. Lawton asserted that a president could not issue a self-pardon. Such memoranda are considered in the Department of Justice to have the force of law. Thus, under current ruling, President Trump could not issue himself a pardon. Thus one can answer the question by saying that the President absolutely, unequivocally, probably can’t issue a self-pardon.

A pardon for family members is another matter altogether. There seems no legal reason why he couldn’t (but many legal and moral reasons why he shouldn’t) give “the best Christmas present ever” to his family: a full, free, and absolute pardon!

Would a Trump self-pardon be the worst pardon ever? Probably, but until and if Trump does give himself a pardon, we would argue that the all-time worst presidential pardon ever was granted by George H.W. Bush to former secretary of defense Caspar Weinberger. Weinberger was about to face trial in the Iran-Contra scandal of the Reagan administration, where Bush had served as Reagan’s vice president. Part of the case against Weinberger involved the use of entries from his diary relating to the making of decisions that led to illegal activity in both Iran (selling arms to terrorists) and with the Contras (illegally funding a rebellion against the government of Nicaragua). Vice President Bush had already testified under oath that he had no knowledge of these activities, but Weinberger’s diaries said otherwise.  They contained material that deeply implicated Bush in the decisions, and could have been used to put the former VP on trial for perjury. On Christmas Eve 1992 (Christmas eve is a very popular time for Presidents to issue pardons – for obvious reasons), Bush granted Weinberger a pardon. Thus, in pardoning Weinberger, Bush was able to keep is activities secret, and in effect give himself a pardon.  Was this the first presidential self-pardon?  In a way, yes.

The way to end the abuse of presidential pardons is to pass a constitutional amendment forbidding self-pardons and pardons for a president’s family members. One might also pass an amendment allowing the Congress 30 days to vote approving a presidential pardon with a majority of both Houses having the ability to prevent a pardon that seems to them inappropriate. Pardons do have a positive role to play. But their checkered history calls upon us to make a few minor adjustments to move closer to the ideal.