Robert F. Williams is a PhD student in military history at the Ohio State University researching the emergence of the airborne subculture during World War II and its influence on the US Army during the Cold War. A former Army infantry NCO with multiple combat deployments to Iraq and Afghanistan, he resides in Columbus, Ohio. He can be reached on Twitter @RealBigWill82 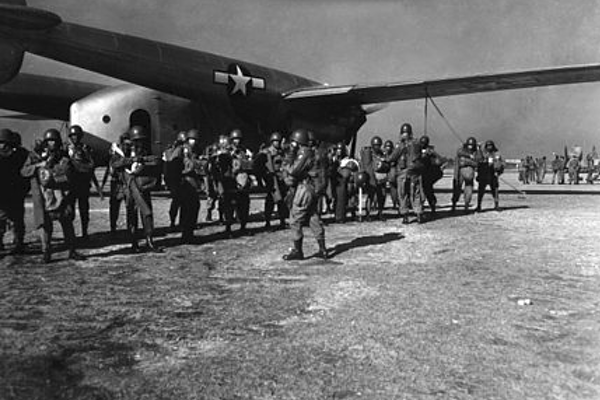 The 555th Parachute Infantry Battalion, Fort Dix, New Jersey, 1947. By year's end, the 555th would be inactivated and its members

assigned to units of the 82nd Airborne Division, making it the first racially integrated division in the Army. Photo U.S. Dept. of Agriculture

Since the unfortunate death of George Floyd, men and women of all walks of life have joined in solidarity around the country to protest institutional racism pervasive in these United States. Since emancipation, Black people in this country have been pressured to be quiet, and when they have spoken out to bring attention to injustice, they’ve often been told to “shut up and dribble.” Even when, as happened in the 1940s, a select group of African American soldiers managed to prove themselves as members of an elite military fraternity, their success did little to earn them equality in American society. Today, as protests against systemic oppression explode across the nation, examining the fate of past attempts to earn equality helps explain the modern frustration of African Americans.

Unsurprisingly, African Americans serving in World War II struggled against racism in Jim Crow America. The Double V campaign positioned Black soldiers as fighting fascism abroad and Black civilians as fighting racism at home. America regarded them as good enough to serve in the military, yet not good enough to enjoy full citizenship. Within the Army, paratroopers enjoyed a status higher than the average GI. So, when the call went out for African American volunteers to partake in parachute training—a new path toward defeating Jim Crow seemed at hand. But unfortunately, racism and prejudice at all echelons in the Army of World War II precluded even elite airborne infantrymen from receiving equal treatment during the war.

Constituted on November 25, 1944, the 555th Parachute Infantry Battalion represents a microcosm of the African American experience in the United States. 17 of the 24 original volunteers came from the 92nd Infantry Division, better known as the “Buffalo Soldiers.” The new Battalion’s distinct nickname, the “Triple Nickles,” came from the three buffalo nickels that formed the battalion’s distinguished unit insignia, with the buffalo nickels serving as an homage to the 92nd. According to a memorandum from the Advisory Committee on Negro Troop Policies in December 1942, however, this battalion was not born of a desire to foster racial equality, but rather “for purposes of enhancing the morale and esprit de corps of the negro people.” Rather than serving to normalize the inclusion of African Americans in elite units of the Army, the Triple Nickles ultimately represented more of the same Jim Crow segregation.

From its inception, the unit and its men faced the same sort of institutional racism that plagued the United States Army and the country. In the Jim Crow Army, black soldiers were not allowed into the Post Exchange at Fort Benning. Meanwhile, German and Italian prisoners of war, ostensibly captured after killing Americans, enjoyed American cigarettes and sodas from the same establishment. At the same time, Black soldiers, like Walter Morris, walked by thinking “there must be something wrong with us,” to not be allowed the same comforts as America’s enemies. Reports of bottlenecks in the transfer of black troops due to white officers not passing along applications permeate African American newspapers of the period, like the Chicago Defender and the Baltimore Afro-American. In spite of every effort to hinder their development, however, the Army’s only all-black airborne unit impressed more than just its white trainers. The 22 officers and hundreds of men made an impact on nearly every officer who witnessed their training—including the Commanding General of all Army Air Forces, General Henry Hap Arnold. Exhibiting the high morale and esprit de corps expected of all paratroop units, they were keen to test themselves in combat while trying to remain “neither wistfully glorified nor overpublicized,” according to the Baltimore Afro-American.

The first African American paratroopers were eager to prove that “all blood runs red” and that their race “was being underestimated,” according to Sgt. James E. Kornegay, who stated as much in a note to his hometown newspaper, the Philadelphia Tribune. Proving themselves quietly, however, was never enough. Thanks in part to personnel shortages created by white officers deliberately misplacing transfer documents, or otherwise preventing the battalion from reaching full strength, the unit never made it overseas. As the first Company First Sergeant in the 555th, Walter Morris recalled, “Since no Field Commander in Europe or the Far East wanted ‘colored troops’ mixing with their racist white troops, the Army was stuck with us.”

Ultimately, the Triple Nickles received an important, if unglamorous, mission—Operation FIREFLY. This task involved partnering with the United States Forest Service to jump into forests and fight wildfires throughout the Pacific Northwest. Starting in November 1944, the Japanese sent more than 9,000 balloon bombs toward North America, intending to start fires. A handful reached the United States. Five children and a woman were killed by a balloon that exploded on May 5, 1945, during their Sunday school outing near Bly, Oregon. That incident, combined with the impending fire season, prompted the Army to send the Triple Nickles to assist. The 555th arrived at Camp Pendleton, Oregon on May 12, 1945, responded to at least 36 fires and made more than 1,200 individual jumps up and down the West Coast.

While fighting fires on the homefront was a critical part of the broader effort to safeguard the country during the war, for a battalion of paratroopers imbued with the same sort of camaraderie, elitism, and esprit de corps as white parachute infantry units, this assignment was more than disappointing. “We felt it was a dodge to avoid using us in combat,” Second Lieutenant Roger Walden asserted. Thus, the rank and status of Triple Nickles members did little to save them from prevailing racist attitudes, and sometimes even worked against individual members of the 555th. Former First Sergeant turned First Lieutenant Walter Morris, for instance, recalled an incident where a military police officer questioned his status at a North Carolina train station. His printed orders did not suffice, and he was arrested for impersonating a paratrooper. In Atlanta in April 1944, white paratroopers accosted Private B. F. Lane, Jr. because they refused to believe there could possibly be black members of the airborne elite. Add this kind of harassment to the humiliation of being treated worse than enemy POWs, while training on a base named after an early advocate of secession who would never have recognized their humanity, and it is easy to see why, as Morris suggests, Black soldiers developed an inferioritycomplex. The opportunity to serve as paratroopers helped assuage feelings of inadequacy but did little to rectify extant racism in the ranks.  “We didn’t win any wars, but we did contribute,” Morris stated in 2000. “What we proved was that the color of a man had nothing to do with his ability.”

Despite Morris’ modesty, the unit did enjoy some small victories, and found itself marching with the famous 82nd Airborne Division during the January 1946 victory parade in New York City. The inclusion of the Triple Nickles in the ceremony, and their success fighting fires out west, served as a step toward integration, as was soon demonstrated by a shift in barracks. The battalion remained attached to the division until it was reorganized as 3rd Battalion, 505th Parachute Infantry at Maj. Gen James M. Gavin’s request. Gavin, the Army’s youngest division commander and a progressive thinker, personally ensured the movement of the 555th from a run-down portion of Fort Bragg into proper barracks in the 505th Regiment’s area. At this point, black and white soldiers moved into the same barracks together for the first time. These actions made the 82nd the Army’s first integrated division in December 1947—a full six months before President Harry S. Truman signed Executive Order 9981 ordering integration in the Department of Defense. Integration, however, was far from full citizenship, something African Americans are clearly still fighting for today.

As the nation struggles to confront systemic racism in its ongoing quest to form a more perfect union, it is helpful to remember that becoming members of the elite airborne did little to create equality for African Americans in World War II and beyond. Black soldiers have consistently answered the call to serve a nation that considered them mere second-class citizens, but their quiet requests for equality, even after having proven themselves beyond the typical service-member, were not heeded. The lesson of the 555th Parachute Infantry Battalion for African Americans is a sadly familiar one: proving oneself is not enough; becoming members of a select fraternity was not enough to earn the respect and equality that comes with full citizenship. It is no wonder, then, that people of color and their allies are currently demanding, rather than quietly requesting, equality.