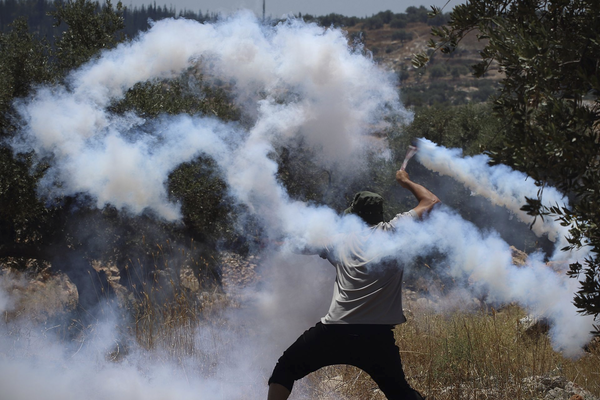 I first experienced the horror of CS gas more than 50 years ago. Today when I think of CS gas I remember how badly I felt when tear gassed on the streets of Saigon, and in Northern Ireland. I still feel the pain. The burning sensation remains in my nose, my tearing eyes, my mouth and lungs and with its stinging acrid taste it is ever present in my memory bank. In one tear gas attack I recall frantically blinking my eyes unable to keep them open. Blurred vision because of the gas further disoriented me. I had great difficulty breathing. Chemically the gas creates serious nasal mucus discharge and disrupts the lung's ability to act normally. Along with dizziness, the desire to retch, heavy coughing and mental disorientation was prevalent. The grayish white cloud of gas discharged by grenade or canister usually was a success in quelling the crowd of demonstrators as the police or military worked to control the riot or the protesters.

Importantly, after a gassing, no matter how much a person washes his eyes and gargles his lungs to free himself from the gas, the effect lingers for many hours, usually into the next day. The pepper-like smell remained in my hair and on my clothing for days. But for those who use it, meaning the police and the military, there is nothing better as a riot control agent.

Originally created in 1928 by two Englishmen and named after the first initials of their last names, CS gas grew in importance over the years. Not only as a riot control agent, American forces also used CS gas against Viet Cong and North Vietnamese troops dug in fixed positions during battle.

My first gassing took place when I covered a Buddhist-led anti-government street demonstration on Tu Do Street in downtown Saigon. Originally, it was a simple confrontation between the police and saffron robed monks protesting unfair treatment by the government. Then it turned ugly and graduated from pushing, shoving and rock throwing to baton swinging by the police and the release by the police of gas grenades into the growing crowd. The cloud of gas is shapeless, amoeba-like, so there is no escape by outrunning it. I turned in a circle looking for a way out. There was none. With my camera crew we eventually found our way to a side street and safety after massive irritation to our eyes and lungs.

In time we learned to carry a wet cotton kerchief that we wrapped around our face during demonstrations to protect us if the South Vietnamese police used CS gas. It was not a perfect protection but it mostly worked and made the irritation from the gas less painful.

As we saw, Federal troops used CS tear gas as well as pepper spray in Lafayette Park, Portland, Oregon and other American cities to control what were mostly peaceful demonstrations. For Federal troops in American cities, Vietnamese police in Saigon, and British troops in Northern Ireland, a volatile canister of CS gas proved more effective than a simple wood truncheon to keep a crowd in check.

Here is a well learned tip as a way to survival: in this era of facemasks, as I described, carry a soaking wet bandana, or a handkerchief and as soon as the gas is let loose tie one or the other around your face to help protect yourself from the pepper smelling gas or spray. It is not a panacea, but it works against gas in your immediate surrounding. It also helps in recovery time, and that is no small thing when troops use gas repeatedly as one of their weapons against free, peaceful assembly.