The Slow Path to Police Reform in Northern Ireland 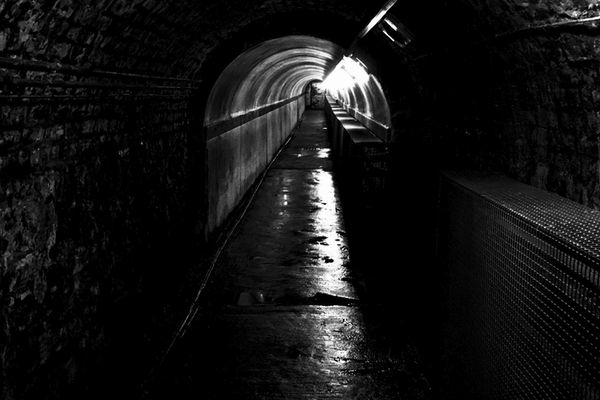 Crumlin Road Tunnel, Belfast. The tunnel connected a now-demolished courthouse with a now-empty jail, allowing suspected terrorists to be moved between the two buildings without exposure to the public. Photo Don Beaudette

In the days following the death of George Floyd at the hands of a white Minneapolis police officer, political leaders and activists have been calling for comprehensive police reform, with some activists demanding that governments defund or abolish the police. As cities like Minneapolis struggle with the question of how to address racism within their police forces, it is worth examining how other communities across the world have confronted similar challenges in the recent past.

A Catholic civil rights movement, modeled on the example of the Black civil rights movement in the U.S., demanded the redress of these grievances starting in the late 1960s. Tensions between Catholics and Protestants came to a head in the summer of 1969, when the British Army was deployed on the streets of Northern Ireland to restore order in response to widespread rioting, during which the Royal Ulster Constabulary (RUC), the UK’s police force in Northern Ireland, manifestly failed to defend Catholic communities.

Over the next three decades, the RUC killed 44 Catholics, 26 of them civilians. The RUC’s actions against the Catholic community extended beyond their own violence into collusion with Loyalist paramilitary groups. One of the most notorious such crimes was the murder of the solicitor Pat Finucane as he ate dinner with his family on February 12, 1989. This murder was carried out by members of the Ulster Defense Association, likely acting on information obtained from members of the RUC.

Sectarianism and collusion with paramilitaries created a situation in which much of the nationalist community saw the RUC as an occupying force without any legitimacy to police their community. Even those few Catholics who joined the RUC faced sectarianism and discrimination from their Protestant colleagues, and these attitudes also influenced the police force’s interactions with Catholic communities throughout Northern Ireland.

As Northern Ireland’s peace process accelerated in the 1990s, the people of west Belfast had “no faith whatsoever in the RUC. As far as nationalists were concerned the RUC was simply another orange militia, which was set up to basically keep the nationalist population in their place,” according to a senior republican who spoke with one of the authors for an interview in May 2015.

The Catholic community’s lack of faith in the RUC was reflected in the police force’s demographics. On the eve of the Good Friday Agreement of 1998, only about eight percent of the RUC was Catholic. But police reform was a key feature of peace in Northern Ireland. And the reforms were so successful that today nearly 90 percent of the population of Northern Ireland has confidence in law enforcement.

The transformation of the RUC into the Police Service of Northern Ireland was a complex and multifaceted process. A core goalof this transformation was to create a “police service capable of attracting and sustaining support from the community as a whole” that would be “representative of the society it polices.”

At the same time, reformers in Northern Ireland sought to fundamentally change the manner in which policing was conducted, particularly in nationalist communities. The PSNI was directed to adopt an approach that focused on de-militarized, community based policing. Reforms in this area included the creation of neighborhood policing teams, a commitment to policing via foot patrol, replacing armored Land Rovers with ordinary police cars, and engaging more directly with grassroots restorative-justice organizations.

PSNI Superintendent for Service Delivery Bobby Singleton reflected on the significance of these changes in a 2015 interview with one of the authors. According to Singleton, “neighborhood policing has played a critical role in terms of … establishing, in some cases, relationships where they didn’t previously exist with the police. I think individuals in neighborhood policing teams have really toiled, through blood sweat and tears to really create trust and relationships which have allowed communities to put to one side some of the issues that they had with the police, and to try and work and cooperate with us.”

In Northern Ireland, the challenge of acceptable, effective, community-based policing was inextricably linked with the idea that all of Northern Ireland’s people should see themselves and their communities reflected in the police force.

Increasing Catholic recruitment to the reformed PSNI was itself a controversial process. Sinn Féin, a nationalist political party with close links to the IRA, was highly critical of the legislation creating the PSNI and initially refused to endorse the new police service.  In 2001 Sinn Féin leader Gerry Adams warned potential Catholic recruits to the PSNI that they would “be accorded exactly the same treatment the republican movement accorded to the RUC.”

Despite Adams’ ominous words, Catholics began to join the PSNI in larger numbers. Today, nearly one-third of all PSNI officers are from the Catholic community (as of the 2011 census, Catholics were roughly 45% of Northern Ireland’s total population). This change in the composition of Northern Ireland’s police force was achieved, in part, through a policy of “50-50 recruitment,” which aimed to gradually increase the proportion of Catholics in the PSNI over a period of 10 years as older Protestant officers retired. Fifty-fifty recruitment has since been brought to an end, but some have called for its return while others have opposed a resumption of the policy.

Recruitment of Catholics to the PSNI occurred alongside other important institutional changes. The Police (Northern Ireland) Actalso introduced a series of changes in the name, symbols, and management of the police force. The Good Friday Agreement introduced a devolved government in which Catholics and Protestants were required to share power. In 2007, Sinn Féin finally endorsed the PSNI as part of an agreement to share power with their long-time Protestant rivals, the Democratic Unionist Party. These changes, along with recruitment of Catholics, fostered high levels of community trust in the police among both Protestants and Catholics.

Based on the example of Northern Ireland, there is reason to argue that increasing the representation of people of color in police forces across the U.S. should be an important part of the broader agenda to address racism in these forces. The police forces of major U.S. cities are disproportionately white.

Creating a police force that better represents the ethnic and racial makeup of the community it serves, and deploying that force with demilitarized tactics focused on community engagement and restorative justice, will foster confidence in the police; a more productive relationship with the community could reduce police violence toward citizens, especially black citizens who face this violence in disproportionate numbers. This conclusion is consistent with the findings of research on the effects of police force diversity and police misconduct in other parts of the UK and the U.S.

To be sure, Northern Ireland still faces problems with sectarianism. There are still “peace walls” that divide Catholics from Protestants, and the power-sharing executive did not function for nearly three years from January 2017 until January 2020. Yet progress toward a society in which Protestants and Catholics receive equal treatment under the law has been tangible and enduring. Police reform has been a significant part of that change.

On April 18, 2019, members of the fringe republican group called the New IRA murdered journalist Lyra McKee as they were attempting to shoot members of the PSNI amidst rioting in Londonderry/Derry. Sinn Féin’s official Twitter account sent out a joint statement that said, “We reiterate our support for the PSNI, who while carrying out their duties were also the target of last night’s attack. We call on anyone with any information to bring that forward and assist their inquiries.”

In this remarkable statement, Sinn Féin signaled the depth of its confidence in the PSNI by simultaneously condemning republican violence and encouraging the nationalist community to cooperate with the police. This statement was issued 21 years after the Good Friday Agreement. Change was slow and sometimes painful, and the process encountered many obstacles, but it happened. The process will likely be similarly contentious in the U.S., but if Northern Ireland can do it, surely we can, too.