Pawns of History: The Poetics of Russian Revolutionary Politics

Tim Brinkhof is a Dutch journalist who has staged several exhibits on Russian history, while writing for outlets including PopMatters, History Today and The New York Observer. 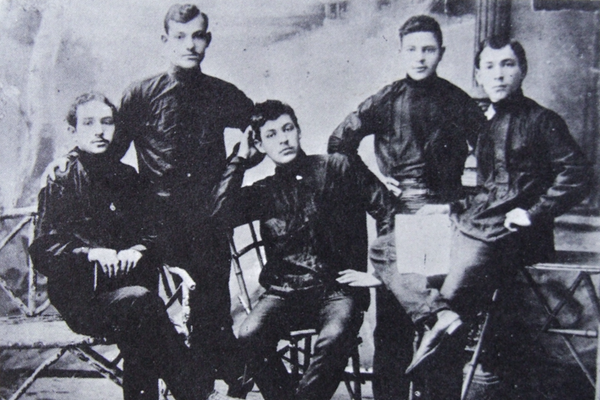 I don’t know about the others, but I was in awe of the tenacity, durability, and fearlessness of human thought, especially that thought within which—or rather, beneath which—there loomed something larger than thought, something primeval and incomprehensible, something that made it impossible for men not to act in a certain way, not to experience the urge for action so powerful that even death, were it to stand in its way, would appear powerless.

Those were the words by which Aleksander Arosev recalled a secret meeting he attended as a teenager alongside his best friend, the broad-shouldered yet soft-spoken Vyacheslav Skriabin, and several other prodigious students from their high school in the Russian countryside. Under the weak, white light of a kerosene lamp, they read and discussed illegal socialist literature. If the tsarist police were to discover them, they would most likely receive a one-way ticket to the icy outskirts of Siberia, where years of forced labor awaited.

But the boys were not afraid of such a fate. Protected by their idols, Karl Marx and Friedrich Engels, whose portraits watched over them from along the walls, they studied on in their attempt to understand the world so that one day they might shape it in their image. Though Arosev had always felt it in his bones, hardly could he have believed that in only a few years’ time both his wildest dreams and greatest nightmares would become reality: that in 1938 he would meet his death at the hands of a comrade he was yet to meet, while his friend Skriabin—who had only just adopted the nickname ‘Molotov’—would serve as the commissar of a nation they were yet to create.

In his book, Three Whys of the Russian Revolution, the conservative historian Richard Pipes questions the historical inevitability of ‘Red October,’ the Bolshevik usurpation of the Provisional Government, by reminding us that, according to Marx, the world’s first communist uprising could not possibly have taken place in a country as archaic as Russia, but only in an industrially advanced society like England or Germany, where the capitalist system had, by gradually eroding the cultural differences between different groups of workers, created a unified, class-conscious proletariat.

Valid though his point may be, by dismissing the insurrection as a fundamentally trivial event, Pipes turns somewhat of a blind eye to the elements of Russian culture that made such an event possible in the first place. Indeed, while its inevitability remains up for debate, there is sufficient reason to believe the ‘proletarian’ coup could not have occurred anywhere except in Russia—a nation which, during the final decades of the tsarist regime, had been transformed into an ideal breeding ground for radical activism.

There was but one place a person in nineteenth century Russia could take his or her ideas, and that place was not parliament—there was none up until the creation of the Duma in 1905—but the printing press. Consequently, Russian literature became deeply infused with social and political thought. After the emancipation of the serfs in 1861, followed by the government’s laissez-faire attitude when it came to integrating them into the state, many authors took it upon themselves to figure out how people should live together and organize their society.

The ones that saw no wrong made it past the censors with ease, while those who opposed the establishment were persecuted and penalized; Fyodor Dostoevsky was imprisoned for his involvement in a clandestine literary group, and Leo Tolstoy excommunicated from the Orthodox Church for writing Resurrection. But no matter how hard the government tried to silence its critics, their work still found many admirers, the most passionate of which belonged to a small, though steadily growing class of ‘professional’ revolutionaries. These were the people who would eventually become known as the Communists, and if we are to understand the trajectory Russia followed on their behalf, the stories that influenced them might be as good a place to start as any.

Given how intertwined literature and legislation were in the Russian Empire, it should come as no surprise that Arosev was far from the only revolutionary figure who cultivated an emotional attachment to the books he read. The Bolshevik Sergei Mitskevich, for example, described how his “eyes were opened,” upon reading a socio-ideological novel by Ivan Turgenev titled The Virgin Soil, and how it inspired him to read religiously in hope of discovering “the key to the understanding of reality.”

Similarly, Lenin biographer Robert Service points out how little ‘Volodya’ was quick to develop intimate imaginary relationships with his favorite writers, particularly the influential revolutionary author Nikolai Chernishevsky, and was said to have described himself, if only in closed company, as being “in love” with Marx. The significance of this attachment was twofold. Firstly, it turned the writings of socialist thinkers into a kind of gospel presumed to provide an all-encompassing and irrefutable worldview. Secondly, it elevated the revolutionaries, the persecuted disciples of this repressed truth, to the status of prophets.

In its infancy, this kind of self-glorification tended to manifest itself in harmless, even pitiable forms. The Polish-born Bolshevik Feliks Kon, for instance, once likened himself to a “young knight determined to wake up a sleeping princess,” while the Russian Bolshevik Alexander Voronsky looked back on himself and his young comrades as “overconfident and full of peremptory fervor,” as they argued over “the commune, the land strips, and the relationship between the hero and the crowd.”

But once these imaginative children had grown into adults—adults with a high degree of political power at their disposal, no less—their elevated self-perception came to carry potentially severe consequences for their fellow countrymen. Most importantly, it led Lenin to proclaim that their revolution could not possibly succeed without the leadership of a so-called “revolutionary vanguard,” a paramilitary group consisting of trained revolutionaries who, by virtue of their profession, walked “along a precipitous and difficult path, holding each other firmly by the hand.”

Opponents of the Soviets and their doctrines often suggest that the members of this vanguard drew on socialism’s humanitarian appeal in order to mask their selfish lust for power, because they knew very well that the only way in which men like them—born outside the aristocracy—could ever attain it was through revolution. While certainly in line with our age-old understanding of human nature, a closer inspection of the revolutionaries’ private writings renders this, too, difficult to believe.

Indeed, to those same opponents, it may come as a shock to learn that many revolutionaries habitually doubted themselves and, as a result, took great pains to ensure they acted in the name of truth and truth alone. For example, in order to decide their political allegiance, Arosev and his companion, Vyacheslav, once debated each other on behalf of the Bolsheviks and their political rivals, the Socialist Revolutionaries, under the promise they both side with the winner.

Likewise, the Left Communist Valerian Osinsky, weary of passing trends within the academic world, studied for months on end trying “very hard to give the Decembrists a non-Marxist explanation,” and did not join Lenin’s movement until he had officially failed to find it. Osinsky’s trials and tribulations constitute just one reason why the Russian historian Yuri Slezkine, in his 2017 study House of Government, calls the revolutionaries “preachers,” which he did, not to imply a strong connection between the ideas of Christianity and those of Marxism, but because the revolutionaries followed their ideology to a religious extent.

And yet, the revolutionary’s commitment to his cause did not, ultimately, consist of rationality alone. There was something larger, something “primeval,” as Arosev said, at play. For their involvement in covert organizations, many young Marxists found themselves, at one point in their life, exiled to a tiny village in northern Siberia. Buried year-round beneath the snow and isolated from the rest of civilization, they were accompanied only by a few of their close friends and a handful of books. Reading from dawn till dusk, or dusk till dawn—it was hard to tell out on the tundra—they willfully lost their ability to tell fiction from reality.

In these barren conditions, plagued by depression, the Russian Bolshevik Yakov Sverdlov doubled down on a maxim he had formulated in his adolescence: “I put books to the test of life, and life to the test of books.” At the same time, Feliks Kon began dreaming vividly of the day when “the world of slavery and untruth would sink into the abyss, and the bright sun of liberty would shine over the earth.” Aside from noting the poetic energy with which Kon writes about his political aspirations, just consider, for a moment, how similar his own dream sounds to that of Vera Pavlovna, the selfless heroine of Chernishevsky’s feverishly popular socialist novel, What is to be Done?:

“The day breaks in a splendor of joy that is all of nature filing the soul with light, warmth, fragrance, song, love and tenderness.”

And so, at the core of the revolutionary movement, we finally find not only an unwavering determination to regard art and reality as one and the same, but also an unflinching devotion to the insurmountable task of materializing the beauty, peace and harmony that can so easily exist on a page, yet so seldom shows itself in life.