Alan Singer is a historian and professor in the Hofstra University Department of Teaching, Learning and Technology. He is the author of New York’s Grand Emancipation Jubilee: Essays on Slavery, Resistance, Abolition, Teaching, and Historical Memory (SUNY Press, 2018). Follow Alan Singer on Twitter: https://twitter.com/ReecesPieces8. 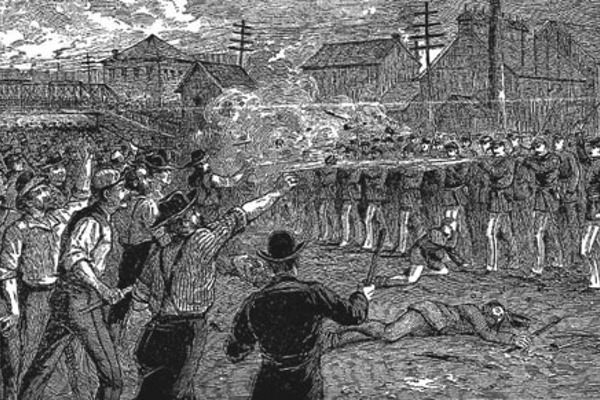 "The Battle of the Viaduct," 1877 Railroad Strike, Chicago.

In his controversial “Send in the Troops” New York Times op-ed, Senator Tom Cotton (Republican-Arkansas) misquoted the Constitution of the United States. New York Times editors, who are under fire for running the essay, either failed to fact-check the article or ignored errors. The Times now admits that the opinion piece “did not meet our standards,” but that does not explain why it was published. Cotton received both a bachelor’s and law degree at Harvard University where his undergraduate major was government, which raises questions about the quality of the education he received at the Ivy League institution.

According to Cotton’s essay, the federal government has a constitutional duty to the states to “protect each of them from domestic violence.” He placed the phrase in quotes. However, what Article 4 Section 4 of the Constitution actually says is that “The United States shall guarantee to every State in this Union a Republican Form of Government, and shall protect each of them against Invasion; and on Application of the Legislature, or of the Executive (when the Legislature cannot be convened) against domestic Violence.” The federal government only has the constitutional authority to intervene in response to “domestic Violence” when requested by state governments. At a time when Americans are questioning the nation’s racist heritage, it is worth noting that Article 4 Section 2 is the passage that required the return of freedom-seekers who escaped enslavement to the persons who claimed to own them.

In his op-ed essay, Cotton defended Donald Trump’s assertion that under the Insurrection Act of 1807 the President had the unilateral right to dispatch federal troops to states and cities to quell domestic unrest. Cotton claimed “This venerable law, nearly as old as our republic itself, doesn’t amount to ‘martial law’ or the end of democracy, as some excitable critics, ignorant of both the law and our history, have comically suggested . . . Nor does it violate the Posse Comitatus Act, which constrains the military’s role in law enforcement but expressly excepts (sic) statutes such as the Insurrection Act.”

The use of federal troops in a law enforcement role has a twisted and often anti-working class and racist history. The Militia Act of 1792, the forerunner of the Insurrection Act of 1807, was written to advance genocidal policies against Native American nations. It authorized the deployment of federal troops to defeat native resistance to displacement by European American settlers moving into the Northwest Territory. After a series of American defeats by a confederation of native forces including the Miami, Lenape, Huron, and Shawnee, who were protecting their homelands, President Washington ordered the formation of a special federal army unit. Under command of General Anthony Wayne, federal troops defeated the confederated tribes at the Battle of Fallen Timbers in 1794. In the Treaty of Greenville, they were forced to abandon most of what would become the state of Ohio. I still remember reading about Wayne’s “heroic exploits” as a second-grader in the 1950s in Anthony Wayne, Daring Boy, part of the Childhood of Famous Americans series.

The Militia Act was next used in 1794 against white frontier farmers in western Pennsylvania. Washington, urged on by Secretary of Treasury Alexander Hamilton, dispatched federal troops to quell protests against a whiskey excise tax that favored large producers and discriminated against them. A 12,000 member federal force was sent to Western Pennsylvania to confront a rebel army that proved to be largely fictitious. A small group of farmers were arrested and sent to Philadelphia for trial on charges of treason. Two were convicted and an apparently embarrassed Washington pardoned them both. This was only the first instance in United States history that federal troops were used to throttle working-class protest.

The Insurrection Act of 1807 expanded Presidential authority to deploy federal troops to suppress domestic unrest. “[I]n all cases of insurrection, or obstruction to the laws, either of the United States, or of any individual state or territory, where it is lawful for the President of the United States to call forth the militia for the purpose of suppressing such insurrection, or of causing the laws to be duly executed, it shall be lawful for him to employ, for the same purposes, such part of the land or naval force of the United States, as shall be judged necessary, having first observed all the pre-requisites of the law in that respect.” The primary prerequisite for ordering federal troops into action was issuing a warning.

The 1807 law probably was a response by the Jefferson administration to fear of a revolt led by former Vice-President Aaron Burr in newly acquired western territories. Jefferson endorsed the legislation after Secretary of State James Madison argued that under existing law, “It does not appear that regular Troops can be employed, under any legal provision agst. Insurrections but only agst. expeditions having foreign Countries for the object.” Jefferson never used the new Presidential authority against Burr, but did invoke it in 1808 to block smuggling from Canada on Lake Champlain in upstate New York.

In the 1830s, President Andrew Jackson invoked the 1807 law twice. In 1831, at the request of the Governor of Virginia, federal troops were used to help suppress the Nat Turner slave rebellion. In 1834, Jackson used the law with an invitation from the governor of Maryland to break a strike by Irish immigrant workers on the Chesapeake and Ohio Canal. The law and federal troops were later used repeatedly to defeat workers striking for the right to organize unions, fairer pay, and safer conditions. In 1877, President Rutherford B. Hayes sent federal troops into Baltimore, Philadelphia, Pittsburgh, and Martinsburg, West Virginia to break the Great Railroad Strike. In a Presidential proclamation Hayes issued the required warning and announced that the request for federal assistance had come from the governor of West Virginia.

In 1894, President Grover Cleveland used the Insurrection Act to break the Pullman Strike and in 1914 President Woodrow Wilson used it against striking Colorado coal miners. In all three cases federal intervention was requested by the states and powerful business interests. Cleveland also sent federal troop into the Wyoming Territory in 1885 at the request of mining companies when workers affiliated with the Knights of Labor attacked Chinese contract laborers. In 1946, President Harry Truman used federal troops to break a strike by railway workers and in 1952, during the Korean War, he threatened to use his authority as Commander-in-Chief to seize, open, and operate U.S. steel mills when workers went out on strike.

Herbert Hoover notoriously used the Insurrection Act in 1932 to order federal troops to disperse World War I veteranswho gathered in Washington DC during the Great Depression to demand a promised federal bonus for their wartime efforts. President Lyndon Johnson (1967) and President Richard Nixon (1971) also used the act to prevent First Amendment guaranteed political protests in Washington DC, in both cases against the war in Vietnam. Franklin Roosevelt (1943), Johnson (1967-1968), and President George H.W. Bush (1992) used the act to police urban ghettos that exploded in violence in response to systemic racism and police abuse.

The Insurrection Act has been modified and reapproved by Congress a number of times. An 1861 revision authorized President Abraham Lincoln to use state militias and the United States armed forces to prevent Southern secession.

“Whenever the President considers that unlawful obstructions, combinations, or assemblages, or rebellion against the authority of the United States, make it impracticable to enforce the laws of the United States in any State by the ordinary course of judicial proceedings, he may call into Federal service such of the militia of any State, and use such of the armed forces, as he considers necessary to enforce those laws or to suppress the rebellion” (July 29, 1861).

During the debate over the Ku Klux Klan Act of 1871, Congress rejected limits on federal authority that would prevent intervention to protect the rights of freedmen. President Ulysses Grant used the Insurrection Act three times. In October 1871 to combat Ku Klux Klan activity in South Carolina, in September 1872, to intervene in the Louisiana gubernatorial election, and in May 1874 to suppress armed battles between political factions following a disputed election.

However as Southern states were “rehabilitated” and white rule reestablished in the former Confederacy, white Americans increasingly opposed federal military intervention in domestic affairs without specific state authorization. As part of the Compromise of 1877 President Hayes, who had no compulsion about using the Insurrection Act against workers, signed the1879 Posse Comitatus Act, restricting Presidential use of the Insurrection Act to protect freedmen in the South.

“From and after the passage of this act it shall not be lawful to employ any part of the Army of the United States, as a posse comitatus, or otherwise, for the purpose of executing the laws, except in such cases and under such circumstances as such employment of said force may be expressly authorized by the Constitution or by act of Congress; and no money appropriated by this act shall be used to pay any of the expenses incurred in the employment of any troops in violation of this section and any person willfully violating the provisions of this section shall be deemed guilty of a misdemeanor and on conviction thereof shall be punished by fine not exceeding ten thousand dollars or imprisonment not exceeding two years or by both such fine and imprisonment.” - Sec. 15 of chapter 263, of the Acts of the 2nd session of the 45th Congress

It is important to note that since World War II, two Presidents, one a Republican and one a Democrat, used the Insurrection Act without prior state requests to defend African American civil rights under the 14th amendment. President Dwight Eisenhower sent federal troops into Little Rock, Arkansas in 1957 to protect African American students integrating the local high school. President John F. Kennedy used federal troops to protect civil rights activists in Mississippi and Alabama.

If Donald Trump used the Eisenhower-Kennedy precedent, federal troops would be protecting peaceful and constitutionally protected marchers protesting against racism in the United States and police abuse and riots. Unfortunately, that is not about to happen.