Who Can Learn From Taiwan? Apparently not WHO

Keith Clark is a PhD candidate in East Asian history at Northwestern University who specializes in modern Chinese history. In his dissertation, “Defining China: Beijing, Taipei, and the United Nations’ ‘China Seat,’ 1949-1992,” Keith examines how the People’s Republic of China (PRC) and Republic of China (ROC) competed to represent “China” after 1949, and the international consequences of that competition. 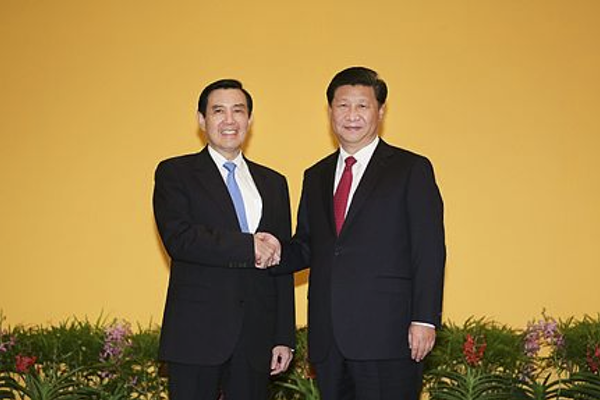 between leaders of the two proclaimed Chinese nations since 1945. Attribution

In early April, World Health Organization Director-General Tedros Adhanom Ghebreyesus requested “please don’t politicize this virus.” Tedros made his remarks after U.S. President Donald J. Trump threatened to withdraw funding from the organization, a threat Trump made reality to the dismay of leaders around the world. States around the globe are dealing with the outbreak of the worst viral infection since the 1918 Flu. COVID-19, the disease caused by the novel coronavirus SARS-CoV-2, has upended societies from where it originated in Wuhan, China, to New York City, United States. Trump’s decision to cut funding for the WHO in the midst of a pandemic was political theater, which Tedros noted and sought to prevent. Tedros’s critique that leaders not politicize COVID-19 was valid, but also dismissive of the WHO’s political role.

Towards the end of April, Taiwan has had 429 people infected with COVID-19 and 6 die. Researchers at Johns Hopkins originally forecast Taiwan would have one of the highest number of infections outside China. How has an island of nearly 24 million that is a global transportation hub separated from China by 180 kilometers, and just over 1,000 kilometers from where the disease originated, managed to contain the spread of COVID-19 so effectively? To answer that question, one cannot turn to the WHO. This was dramatically revealed when a Hong Kong journalist asked WHO Assistant General-Director Bruce Aylward over Skype about Taiwan’s response to the virus. Dr. Aylward first pretended to not hear the question, then ended the call when asked again. When the journalist called back to get an answer about Taiwan, she was told they’d already discussed China.

The WHO’s exclusion of Taiwan is an historical artifact. The United Nations (UN) founded the WHO in 1948. The Republic of China (ROC) was a founding member of the UN and the WHO. China was also a permanent member of the Security Council, along with Britain, France, the Soviet Union, and the United States. Permanent members had, and still have, veto power over matters brought before the council.

After 1949 two states claimed to represent the Chinese nation. The Communist Party of China established the People’s Republic of China (PRC) after winning the Chinese Civil War (1946-1949). The Kuomintang, or nationalist party, relocated to Taiwan where they set up the ROC in exile. One of the communist’s first international acts was an attempt to assume China’s place in the UN. The nationalists, however, controlled the organization’s China seat and, along with their U.S. allies, had no intention of losing the power that came with it.

For 22 years the nationalists and their allies kept the PRC out of the UN and its rapidly expanding portfolio of international agencies, such as the WHO. Nationalist delegates to the UN used Beijing’s participation in the Korean War (1950-1953) against U.S.-led UN forces as evidence the PRC was not a “peace-loving state,” a key criterion for membership. Indeed, UN participation in the Korean War resulted from China’s contested status in the world body; Soviet delegates were boycotting the organization in protest of PRC exclusion when the UN voted to intervene in Korea. Taipei and its allies used the Korean War to block discussing which state represented China in the UN until 1961. As decolonization resulted in more states joining the organization, nationalist representatives and their allies allowed the General Assembly to debate Chinese representation, but argued it was an “important question,” thus requiring a two-thirds majority for any change to the ROC’s status in the UN.

In 1971 the UN passed Resolution 2758 (XXVI) that determined the Communist PRC was the legitimate government of China. It also expelled Taipei from all positions in the world body, including the WHO in 1972. Ever since then, Beijing has proactively excluded Taiwan from international organizations, particularly those related to the UN. From 1949 to the 1980s, both Beijing and Taipei adhered to a “one-China policy,” which essentially meant that any organization or state that recognized one could not recognize the other. After Taiwan began democratizing in the 1990s, however, its leaders began taking a more pragmatic approach to international relations. To put it succinctly, Taipei stopped representing the ROC as China. Beijing, however, maintained a one-China policy that included Taiwan. Consequently, Taiwan remains locked out of, or is only able to participate marginally, in many international organizations.

The nationalists excluded the PRC from the UN and its affiliated organizations for 22 years. In comparison, the communists have now excluded the ROC for nearly four decades. Taipei’s claim it represented all of China was a fantasy, but no more so than Beijing’s claim to represent Taiwan. When both parties claimed to represent China, Beijing’s exclusion of Taipei was defensible. But since 1993 Taiwan has sought to reengage the international community in its own right, only to be stymied by China. Shortly after the SARS epidemic in 2002 Taipei won the ability to cooperate more closely with the WHO. In recent years, however, Beijing has curtailed Taipei’s participation with the WHO. It may be more than a coincidence that after Taiwanese elected current president Tsai Ying-wen, who favors a more independent Taiwan, the island nation found the WHO less accommodating.

The WHO claims they are learning from all areas, including Taiwan. After Dr. Aylward’s interview, the organization put out a statement that they were following the outbreak in Taiwan closely. According to a Reuters article, however, Taiwanese officials remain frustrated that the WHO has not shared Taiwan’s experience controlling SARS-CoV-2 with its members and reports Taiwan’s number of cases under China’s. Taipei was aggressive and proactive in preventing the spread of the novel coronavirus to Taiwan. Taiwan’s success at controlling COVID-19 spread has not gone unnoticed in medical communities. By not differentiating Taiwan’s health measures from China’s, the WHO is doing a disservice to international efforts to control the pandemic.

The world is facing a pandemic caused by a novel coronavirus. Taiwan has been successful at controlling that virus and consequently the spread of COVID-19 among its citizens. The global community could learn from Taiwan’s health officials and practices. Maybe it is time for international organizations like the WHO to admit that Taiwan, while still claimed by Beijing as a part of China, neither coordinates with nor is represented by the PRC. The WHO, and other international organizations, exclude Taiwan based on antiquated political considerations. Historical artifacts belong in museums, not international policy.