If Farmworkers Are “Essential,” Why Are They Treated So Badly? 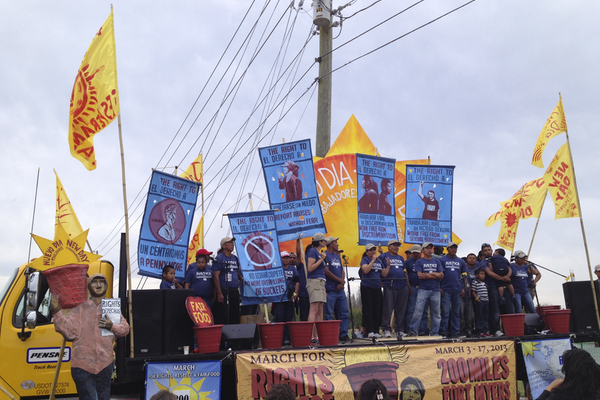 On March 19, 2020, the U.S. Department of Homeland Security, spurred to action by the coronavirus pandemic, issued a memorandum that identified the nation’s 2.5 million farmworkers as “essential” workers.  Soon thereafter, agribusinesses began distributing formal letters to their farm laborers, also declaring that that they were “essential.”

Of course, it shouldn’t have required a government-business effort to establish this point.  Without farmworkers, there is no food.  And the American people need food to survive.

But, remarkably, over the course of U.S. history, farmworkers, although essential, have been terribly mistreated.  Whether as slaves, indentured servants, sharecroppers, or migrant laborers, these millions of hardworking people endured harsh and brutal lives, enriching others while living (and usually dying) in poverty.

Nor is the situation very different today.  Farm labor remains hard, grinding physical toil, often requiring long hours of bending and repetitive motion to gather crops under conditions of extreme heat.  Back strain, poisoning by pesticides, and other injuries, sometimes leading to death, contribute to making agriculture one of the nation’s most hazardous industries.  Employment is often seasonal or otherwise precarious.

Some problems hit portions of the farm labor force particularly hard.  Roughly half of all farmworkers are undocumented immigrants, a status that places them in constant fear of being arrested, deported, and separated from their families.   Furthermore, women farmworkers face high levels of sexual harassment, thereby confronting them with the difficult choice of reporting it and facing the possibility of being fired or remaining silent and allowing the harassment to continue.

In recent decades, the federal government has prosecuted numerous growers and labor traffickers in the Southeastern United States for what one U.S. attorney called “slavery, plain and simple.”  These cases revealed farmworkers were lured to the United States under false pretenses and, then deprived of their passports, chained, held under armed guard, and forced to work.  If they refused, they were threatened with violence, beaten, drugged, raped, pistol whipped, and even shot.  In 2015, President Obama awarded the Coalition of Immokalee Workers, which exposed these practices, the Presidential Award for Extraordinary Efforts in Combatting Modern Day Slavery.

Although people performing some of the hardest and most essential work in the United States certainly seem to deserve a break―or at least reasonable compensation―they have not received it.  In 2017, according to the U.S. Department of Labor, a quarter of all farmworkers had a family income below the official poverty level, while most of the others teetered just above it.  Most of them were forced to rely on at least one public assistance program.  Even after some of the more progressive states raised the state minimum wage, the average wages of farmworkers remained abysmal.  In 2019, they earned only a little more than half the hourly pay rate of all American workers.

Moreover, they now face enormous danger from the coronavirus pandemic.  Greg Asbed, a leading voice for agricultural laborers, has pointed out that, for farmworkers, “the two most promising measures for protecting ourselves from the virus and preventing its spread―social distancing and self-isolation―are virtually impossible.”  Many farmworkers live, crowded together, in decrepit, narrow trailers or barracks, ride to and from their workplaces in crowded buses, have little access to water and soap once in the fields, and cook and shower in the same cramped housing facility.  Rapid contagion is almost inevitable, and very few have access to healthcare of any kind.

Despite the heightened danger, though, working―even working while sick―is the only practical option for farmworkers, for, given their impoverishment, they cannot afford to be unemployed.  Very few receive paid sick days.  Some, to be sure, will be assisted by the one-time $1,200 payment Congress voted for members of low and middle income families. But undocumented workers, who constitute so many of the nation’s millions of farmworkers, are excluded from the provisions of that legislation.  Nor are undocumented workers eligible for unemployment insurance―although, of course, they pay the taxes that fund these programs, as well as the programs that are now bailing out America’s multi-billion dollar industries.

Meanwhile, the Trump administration is getting set to deliver yet another blow to farmworkers.  Almost a tenth of that work force is comprised of Mexican guest workers, legally admitted to the United States for short periods under the U.S. Agriculture Department’s H-2A program.  As America’s big agricultural growers are perennially short of laborers to harvest their crops, they have pressed hard for the admission of these guest workers.  But they dislike the fact that, to avoid undercutting the wages of American workers, the H-2A program sets the wage level for guest workers at local American wage standards.  And in states like California, the state’s rising minimum wage has lifted the wages of farmworkers considerably beyond the pitiful federal minimum of $7.25 an hour.  As a result, the growers have fought for years to reduce the wages paid to guest workers.  Finally, in April 2020, the news broke that their dream of cheap labor would soon be realized, for the Trump administration is now laying plans to lower the guest worker wage rate to $8.34 an hour.  These plans, made at the same time that farmers and ranchers are about to receive a $16 billion federal bailout, will cut between $2 and $5 per hour from the pay of guest farmworkers.

Naturally, small labor organizations like the United Farm Workers, the Coalition of Immokalee Workers, and the Farm Labor Organizing Committee are fiercely resisting the continued exploitation of the 2.5 million people who grow and harvest America’s food.  But there are severe limits to their power, given the greed of the agribusiness industry, plus the nakedly pro-business policies of the Trump administration and its Republican allies in Congress and many states.  For the time being, at least, farmworkers seem likely to remain essential, but expendable.