"From Pandemic Then Grew Rebellion": Considering the 1381 Revolt of the English Peasantry 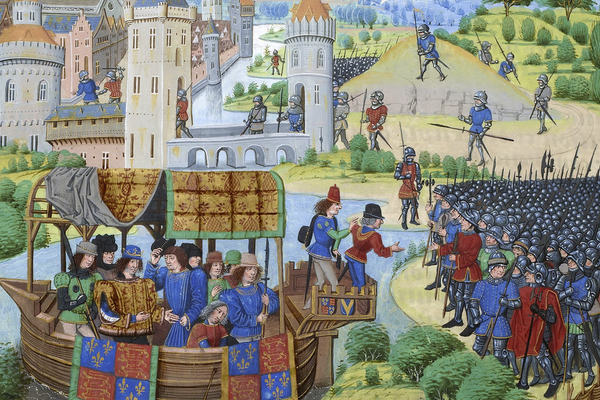 On July 13th in 1381, a garrison of rebelling peasants from Norfolk, Essex, and Kent marched into London, the gates of the city left open either out of sympathy for the cause of this army or out of fear regarding their strength. Many of the rebels had a bit of land to their names, but were still constrained by the strictures of an increasingly draconian feudalism. At the same time, these workers had ironically found themselves increasingly able to move between social classes and professions in a manner that would have been impossible only a few decades before. The dissatisfaction of the leaders of the Peasant’s Revolt, men with names like Wat Tyler, Jack Straw, and the radical priest John Ball, was in part gestated within that incongruous space between new possibilities and restricted rights. The striking and marching workers demanded a new covenant with both Church and state, God and King. What could have theoretically begun as a relatively moderate call to overturn decades-old legislation instead took on more revolutionary aims. As the Peasant’s Revolt built towards the crescendo of marching on London, Ball would preach an open-air sermon south of Greenwich wherein he did “exhort you to consider that now the time is come, appointed to us by God, in which ye may cast off the yoke of bondage, and recover liberty.”

An important biographical fact to know about a man like Ball, and there is a dearth of facts about the men who led the rebellion, is that he was around 10 years old when the Black Death swept through England in 1347. Many of the peasants had living memory of those dark years when perhaps 50% or more of their fellow subjects perished from the bubonic plague, or they at least certainly knew people who had survived those years. Being able to draw direct correlations between that pandemic and subsequent social, cultural, and religious changes is difficult. But in a direct manner, it’s fair to say that the Peasant’s Revolt was shaped by the death and destruction from a few decades before. Samuel K. Cohn Jr. and Douglas Aiton note in Popular Protest in Late Medieval English Towns that as concerns insurrections, “nothing of note appears in the English chronicles until after the Black Death.” The Parliamentary legislation which was the locus of the revolt’s anger – laws which fixed wages and made it impossible to refuse to labor – was passed because of the plague’s reduction of the workforce. Concurrently, in a perhaps more intangible manner, the indiscriminate horror of the plague had upended the religious and political expectations of the Medieval world, inculcating new doubts but also new possibilities.

From pandemic then grew rebellion. Something to keep in mind in the uncertainty of our own moment, are the ways the Black Death both altered material circumstances and shook the faith which people had in dominant ideologies. We’re already seeing immediate and welcome labor radicalization considering both the federal government and private enterprises’ shameful response to the pandemic. Joshua Freeman at Jacobin explains that “many employers treat their workers’ health and their very lives with contempt, failing to provide employees with needed protective equipment, insisting that they work in close quarters, not sending workers with flu-like symptoms home, not disinfecting contaminated spaces… and not offering any or decent extra compensation for life-threatening work” so that consequently “more and more workers have been speaking up and taking action.” Frontline workers who’ve been denied the most basic of protective equipment have asserted their rights, from sanitation workers in Pittsburgh to Amazon warehouse employees on Staten Island.

Rebecca L. Spang, writing in an article in The Atlantic evocatively titled “The Revolution is Under Way Already,” observes the perception that “we are on the verge of a major transformation seems obvious.” In a shockingly short period of time social distancing has forced us to redefine the workday, redefine the relationship of the employed to employer, and opened the possibility for reforms as radical as Universal Basic Income. At the same time, reactionary forces have become even more entrenched in their advocacy for supply-side panaceas, to the point that only a few weeks ago Republican apologists (not least of all the President of the United States) were advocating a return to work which epidemiologists warned could result in millions of deaths. Coronavirus has already had calamitous economic effects, as more than 26 million Americans have filed for unemployment since mid-March, the reality of a looming depression clear in all but name. Spang argues that the “United States of America can implode under external pressure and its own grave contradictions, or it can be reimagined and repurposed.” Will we see an increasing consolidation of the far-right’s international hegemony, or will there be a resurgence of a genuine workers’ movement? What happens next is unclear for all of us – Spang writes that “everything is up for grabs.”

Perhaps one of the most fascinating potential results of the coronavirus pandemic will be the ways in which it challenges the dominant faith of our era. An outcome of the plague in England was the proliferation of new theologies, such as that of Lollardy associated with the Oxford professor John Wycliff, who condemned ecclesiastical excess and promoted more egalitarian social arrangements, and has been seen by some historians as an influence on Ball. It was Wycliff who, in the prologue to his vernacular Bible translation, envisioned a reordering of the English state on behalf “of the People, by the People, and for the People.” Lollardy in some ways anticipated the Reformation which was still more than a century off, but its concerns were very much with the economic and social situation of the Middle Ages, and it was in part a direct outgrowth of the radical changes that had been ushered in by the Black Death. As the plague made all unexamined truths dissipate, challenging both the authority of monarchy and Church, so too does the coronavirus force us to confront the current “religion” of our world – unfettered capitalist excess.

Whatever we wish to call it – capitalism, libertarianism, supply-side orthodoxy, Randianism, or that much ballyhooed phrase neo-liberalism, that our economic system represents a religion as much as the Medieval Church did in its own context shouldn’t be doubted. If anything, the cavalier offer from conservative columnists of sacrificing millions of Americans to the god of the Market confirms the contention that capitalism has become its own dark faith. Eugene McCarraher writes in his brilliant book Enchantments of Mammon that capitalism is its own “regime of enchantment, a repression, displacement, and renaming of our intrinsic and inveterate longing for divinity,” so that Wall Street’s defenders see nothing grotesque in demanding the lives of the innocent to continue the full operation of the market (and the enrichment of those who profit from it). In some ways there is a benefit to the confessions of those who admit such obscenity – they’ve finally said their thoughts out loud. Now there is no need to rationalize their ethics; now we can reject their god, as surely as the conditions around the Peasant’s Revolt led those who took part to reject their oppression.

There are encouraging signs that something similar is happening now; Freeman notes that the “cults of privatization, government downsizing, and… production and distribution have proved disastrous… Already, across the country, ordinary people have been stepping into the breach, producing masks and gowns, helping neighbors, unretiring to the front lines.” There is a sentiment of mutual affection and reciprocity that is emerging from the pandemic; there is also the corollary of authority demanding the sacrifice of those whom both business and government are refusing to support as those essential workers do the necessary work of keeping society functioning through the pandemic. That the coronavirus is compelling a new world to be born is clear – but whether or not the world which exists on the other side of the approaching chasm will be any better waits to be seen. As a warning, there is something to keep in mind from the Peasant’s Revolt – Tyler, Straw, and Ball all ultimately failed, and were executed. There was a brief moment in 1381 when a better world struggled to be born, but the promise of that moment was deferred. It remains deferred.