Has Italy Fallen, Again, to Dictatorship? 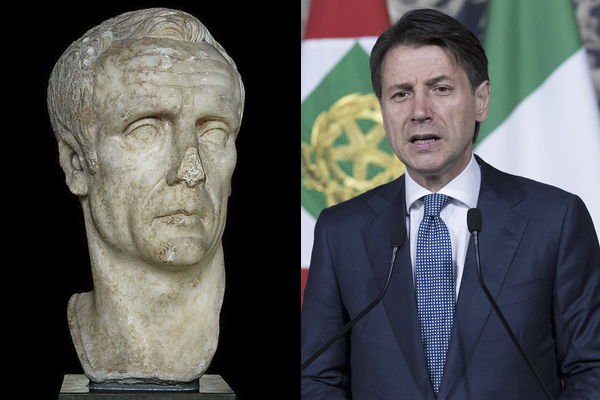 Prime Minister Giuseppe Conte of Italy this past month declared “il blocco,” which has been wrongly translated as “lockdown” but is more like “block” or “blockade.”  In truth, Conte’s decision to shut down the whole country and order the military to punish anyone whole travels outside of one’s own town or village constitutes martial law, la legge marziale. He has sidelined the Parliament, steamrolled over regional governments, and so far, kept the courts out of it.

He started relatively small with 16 million people in parts of Northern Italy that supported his political opponents. Conte then next spread the red zone, the area designated under martial law, to the whole country, while claiming that this effectively got rid of the red zone. Conte was concerned that having a red zone would worry people more than having the whole country under martial law. It became a political problem for him. The extension of the red zone in order to eliminate it technically was not based on a scientific method, but power calculations. He has since made the state of martial law stricter and more absolute, and possibly also more enduring.

All sense of civil liberties have gone out the window, as well as any of the checks and balances on Conte’s power. This has happened to some degree in the U.S. since, but in Italy first, fastest, and more completely even than France, where democratic strongmen are more admired than in the U.S. or Italy. As a result of several factors, Italy was a little more susceptible of falling to Conte’s self-coup than some other liberal democracies. Firstly, Italy has a tradition of temporary strongmen that literally goes back to ancient times. Secondly, it has a strong tradition of disguised dictatorship, with both ancient and modern roots. Thirdly, Italy is a country with a unitary constitution and a federal people.

Conte’s actions are motivated and enabled by the particulars of this crisis. It is therefore difficult to make direct comparisons to other autocratic leaders. Yet Conte resembles a type of autocrat, the earliest modern dictators. Sulla is a relatively obscure figure, but he represents the rise of the modern use of the word “dictator.” It always meant a person with absolute power, but the caveats to that power were significant. The position was an elected office. Yes, like Conte, dictators were democratically elected originally, and were severely term limited to just six months. Sulla arose during a crisis—a civil war in the early first century BC—in which he coerced the Roman Senate to give him long-term absolute power for the protection of people.

After reaching this settlement with the elites that augmented his powers, Sulla then became the first dictator to refuse to renounce his power. He did away with the term limit through intimidating the political and legal institutions of Rome, and soon became dictator for life. He eventually renounced the dictatorship, but the precedent had been set.

Conte is suggesting something similar to Sulla here—he is seizing total power, but only temporarily. Like back in Sulla’s time, the people for the most part are buying into it. However, just like back then, there is a strong possibility that the restrictions on the office will be renounced by Conte after consolidation of his power.

It was Sulla’s precedent that helped the much more famous Gaius Julius Caesar to become dictator about a generation later. Precedent is powerful in all free states, but especially in Italian ones. Once Sulla made dictatorship in its modern incarnation, Caesar could expand upon it.

Eventually, after Caesar was murdered by those wished to restore the Republic, Octavian, later known as Augustus Caesar, decided that he should rule as a dictator but through the use of various offices and euphemisms. One of these euphemisms was “imperator,” which generically meant anyone who held political power to command. That word of course is where we get “emperor” from, but Augustus and many of his successors worked hard to preserve the illusion that they were republican officials, not monarchs. This was an important moment in developing the tradition of disguised dictatorship.

The line from Roman history to Conte, of dictators publicly denying the nature of their power passes through the fascist era and Benito Mussolini. He used the office of prime minister, which is not a dictatorial office, kept the legitimate monarch in place, and used the term “Il Duce”, the leader, and not something more prestigious, in order again to give the illusion that political pluralism and checks and balances, so critical to both Roman republicanism and modern liberal democracy, were still in effect. The stereotype that most have of him is from his later years when he was under the thumb of Hitler, who did not disguise his evil in the same way.

In the beginning, Mussolini represented himself as angry man but one who had no particular ideological axe to grind. He was not an anti-Semite in beginning. He allowed Jews to join the Fascist Party. He made peace with the Church but was far less pro-Catholic than was Franco in Spain. He made people think that he would restore democracy or at least give up power at some point. He kept Parliament going and made the Fascists a broad-based party. Sure, there was only one party. But it had room for enough people that only the most stubborn and principled people would get purged. Compared to Sulla, Mussolini was lenient with most of his enemies. His early death toll was not particularly high. He may have admired Machiavelli’s ideal of killing people only at the beginning of one’s reign.

However, later on, Mussolini changed his behavior. He increased the obvious repression of his regime, embraced anti-Semitism and more importantly for most Italians, began subordinating Italy to Germany.

The institutional context of dictatorship in Italy deserves attention as it may be less known. Italy has been a concept and a geographical entity since before the Romans. However, Italy was not politically unified from soon after the fall of the Roman Empire until 1861. In 1861, the Northern Italians imposed unification on the rest of the peninsula, especially the Southern Italians. They created a unitary government, as opposed to a federal government in the United states, while the people remained very regionalized in terms of culture, history, and identity. This continues to this day.

Italy has regions with reasonable autonomy in good times, but which lack the sovereignty of American states. In other words, Conte legally and constitutionally could completely eviscerate the unity and rights of regions in a way that would be illegal in the United States. A people that is diverse and region-based, Italians are ill-suited to their own state, which rules from the center. This has allowed the government to seize power of the lives of people before and currently, but it also exposes the system as essentially unnatural and anti-democratic.

In sum, Italy is now in the hands of Conte, who can consolidate power into a dictatorship under the cover of “the lockdown,” which is really martial law. It is essential to call him out on this before Conte becomes the next Sulla, Julius Caesar, or Augustus.