Bernice Lerner is the author of All The Horrors of War: A Jewish Girl, a British Doctor, and the Liberation of Bergen-Belsen (Johns Hopkins University Press, 2020). 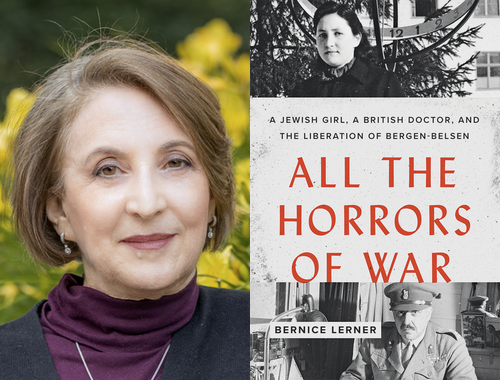 As a biographer I envy novelists, who can craft a captivating tale without needing to carefully document sources of information. Though they face definite challenges, fiction writers can, with whatever degree of knowledge and understanding they possess, invent composite characters and telling dialogue.

As a reader of Holocaust literature, I prefer non-fiction. Give me the facts straight up, please. I do not want to be left wondering whether some person existed or some action occurred. And though I love good stories, I see little need to manufacture them when the truth is powerful and strange and terrible enough.

As a daughter of survivors, I think my grandparents—two of whom were in their early forties and two in their early sixties when they were killed in Auschwitz-Birkenau—would have wanted the full truth of what happened to them and their children to be wailed unto the heavens—lest they all vanish without a trace of having existed, as evidence of the human capacity for evil.

I understand, however, that a case can be made for Holocaust fiction. In portraying virtuous, ignoble, or complex characters in extreme situations, novelists shed light on human behavior in normality. Vivid scenes facilitate our entry into foreign worlds. And in distilling events, the fiction writer can make the complicated comprehensible. Finally, readers who might not otherwise have known that Mengele experimented on twins, or that diplomat-rescuers saved some prominent Jews, or that tattooists engraved numbers on the arms of select Auschwitz inmates—or about any other of the innumerable dimensions of the maelstrom—might learn something. They may be spurred to further exploration.

When fiction is “based on true events” we receive more than the author’s imagination. Of course, the degree to which such stories can be relied upon for historical accuracy varies. How deeply did the author research the subject? How can those of us who are not scholars evaluate whether we are getting a true picture?

Some fiction writers use the Holocaust in the service of a good yarn—as if throwing perpetrators or victims or survivors into their narrative adds pathos or heft. Sometimes the most fantastical accounts (for example, the movies Life is Beautiful and Jo Jo Rabbit) dish up the absurd enmeshed in the plausible, like an SS officer barking orders at inmates in a language they did not understand. This happened. Nazi leaders training Hitlerjugend to defend the fatherland—this happened. While such works may be accused of trivializing the most serious of subjects, they make no claim to being other than farcical.

But pretenders to truth (such as Binjamin Wilkomirski’s Fragments: Memories of a Wartime Childhood) indisputably cross a line. Passing off a false account as true provides fodder for Holocaust deniers and affronts us all.

Sometimes true accounts are mistaken for fiction. Each semester that I taught a college course on the Holocaust, students would hand in papers that read, “In Elie Wiesel’s novel Night...” The Nobel laureate wrote several novels, but Night is a true account of teenaged Wiesel’s experience of the war. I wanted my students to know that.

Survivor accounts are among our most trustworthy sources. Though it was near impossible for people in extreme situations to remember precise dates and times (not even decently-fed soldiers could recall such details), those who were there were (and are) experts on what they saw and felt on their own skins.

Perhaps, then, the greatest good that ever came out of a work of Holocaust fiction was the Institute for Visual History and Education of the University of Southern California Shoah Foundation. In March of 1994, after accepting an Academy Award for Best Picture for Schindler’s List (based on Thomas Keneally’s historical novel), Steven Spielberg launched an ambitious and impractical project: knowing that survivors’ stories would soon be lost to history, he would capture on video as many of their testimonies as possible. Among the roughly 350,000 survivors then alive, most had been young adults during the war; they were now seniors; it would be a race-against-time.

Moving quickly and efficiently—with the aid of historians and scholars, and production logistics experts; with project directors, coordinators, and, eventually, 2,500 interviewers in 33 cities in 24 countries, Spielberg set about achieving his goal. Wanting viewers to “See the faces, to hear the voices,” he insisted that survivors be interviewed in their own homes wherever possible. They were to tell their complete life stories, but spend most of the interview recounting their Holocaust experiences. Spielberg’s team ultimately amassed 52,000 videotaped testimonies.

What possessed these (mostly) ordinary citizens, including those who were shy or humble or who had never before spoken about their experiences, to dress neatly, invite interviewers and videographers into their living rooms, and open up about the darkest period of their lives? For one, most knew about Steven Spielberg’s Schindler’s List. Secondly, they learned about the project through multiple media sources; flyers and ads with the headline “So Generations Never Forget What So Few Lived to Tell” awakened their sense of moral responsibility. Ms. Miller, a child who had hid with her family in a crowded farmhouse in the hills of Italy, said, “We come forward because we are aware of our own mortality and how important it is to share what happened.”

Fortuitously, during the six-year period (1994-2000) in which the interviewing took place, there was an explosion in the field of information technology, enabling Spielberg’s team to create a vast, searchable cyber-archive. The carefully catalogued and scientifically preserved videos were distributed to various organizations (including the U.S. Holocaust Memorial Museum and Yad Vashem).

It would take twelve years (or more than 105,000 hours) to watch all of the interviews. I have only had time to view some, obtained online through the USC Shoah Foundation. Once I began listening to certain survivors, I could not tear myself away. Their stories are inherently harrowing, gripping, and educational. And authentic.

For his noble work, all of humanity owes a debt of gratitude to Steven Spielberg (whose foundation has subsequently worked with the Kigali Genocide Memorial to capture the testimonies of survivors of the Rwandan genocide). Twenty-five years after the release of Schindler’s List, in December 2018, the filmmaker reflected on this “most important experience” of his career. Survivors who could bear to watch the film told him that it could not compare to what was. But they were glad he told the story—it should not be forgotten.

Owing to the singular circumstances, perhaps no author of Holocaust fiction can aspire to again produce a work as far-reaching as Schindler’s List. But writers who ignore or take liberties with the truth ought to reflect on their purposes. If in some measure they aim to edify, counter hate, and inspire empathy, they might be mindful of those who did not live to tell their stories—who, when they could, engraved their names and places of birth in the walls of barracks, or implored others to remember them. Had they had a choice, I believe Hitler’s victims would have wanted nothing about the mortal crimes against them falsified.