The Left is Back!

Walter L. Hixson, distinguished professor of history, University of Akron, is the author of myriad studies, including most recently Israel’s Armor: The Israel Lobby and the First Generation of the Palestine Conflict (Cambridge University Press, 2019). 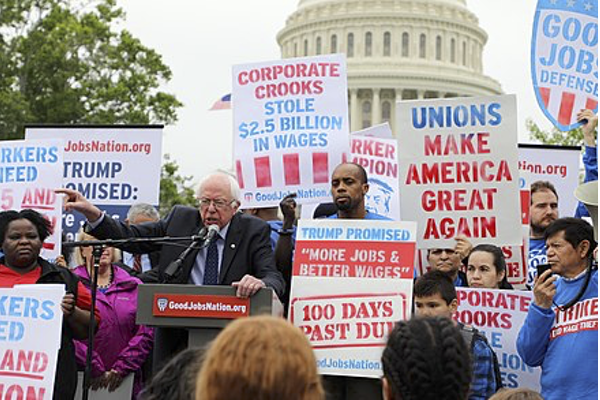 It’s official: the American left is back! Whether Bernie Sanders goes on to win the nomination, which appears increasingly likely, the left has risen and it is not likely to recede anytime soon.

Virtually destroyed by World War II and the Cold War, the left attempted a revival in the 1960s, but the new left was too narrowly focused, too divided, and too immature to have staying power. The Reagan Cold War revival, Clinton centrism, the global war on terror, and right-wing populist demagoguery have all worked to keep the left on the sidelines.

It is now back, albeit as a politics pumping precariously through the veins and cardiac stents of a steady Vermont warhorse who has had the temerity to call himself a democratic socialist. Sanders has tapped into frustration over greed and corporate power that has been building since at least the 2008 economic collapse and the Occupy Wall Street movement. The lopsided disparity of wealth, regularly cited by Sanders on the campaign trail, clearly strikes a chord with his audiences.

The demonization of Sanders as a dangerously radical socialist of course will continue.The Cold War cast a long shadow over American culture and politics and it has not yet fully receded. President Donald Trump, Michael Bloomberg and many others have already invoked the proverbial specter of communism in relation to Sanders.

Sanders has a ready and potentially effective rejoinder to the socialist label. Rather than embrace it directly in the last debate, he responded that corporate wealth and power have produced an already existing and inegalitarian variety of state socialism. He represents the more egalitarian version.

In any case, one lesson Trump should have taught us by now is that many Americans do not like labels, being told how to think, or declarations that certain candidates are too far out of the mainstream to be elected president. At this point both political parties are so discredited—and rightfully so—that alternatives on the far right are being challenged by the revivified left.

Centrists like Pete Buttigieg, Amy Klobuchar and Joe Biden insist that Sanders is too far to the left, but none of them has excited a base. Their failure to do so suggests that Clinton centrism is politically moribund and they are its residue.Democrats may have no choice but to move to the left, to get on the Bernie bandwagon, if they are serious not only about defeating Trump but about having a political future of their own.

In 2016 an electoral college-driven outcome produced a white nationalist demagogue obsessed with the outgoing black president and nurtured by daily doses of Fox News. Americans may now get a second chance and a more genuine alternative to Trump than the uninspiring Hillary Clinton, who secured the nomination through a corrupted Democratic Party machine.

If Democrats move to the left, if they shed the discredited Clinton centrism, they can win the 2020 election. If Trump tries to dodge presidential debates, he will pay a price politically. If he accedes to them, Sanders will destroy him. Politically engaged for decades and still quick on his political feet, Sanders will have the opportunity to expose the vacuous Trump, who scores few points outside of his base when he speaks extemporaneously. The sitting president will have a hard time defending his record of climate denial, impeachable offenses, ripping immigrant children from their parents’ arms, tax cuts for the rich, environmental degradation, and efforts to undermine Medicaid and Social Security, not to mention failure to get Mexico to pay for his wall.

If it pits Trump against Sanders, the 2020 election will offer meaningful alternatives for minority groups. The results in Nevada and the excitement in Texas suggest that Hispanics will continue rally in high numbers around Sanders. African-Americans, feminists, LGBTQ—hard to believe they won’t join in large numbers the millennials already on the Bernie bandwagon. That leaves the mainstream white folks, male and female--both of which turned out majority votes for Trump over Clinton in 2016. Trump’s base of red state reactionaries remains solid, but the impeached president’s record of mendacity, denial of Russian interference, contempt for the rule of law, his growing absolutism and palpable narcissism are likely to continue to alienate conservatives and moderates.

Finally, American Jews, a small minority but known for their high turnout, can help elect the son of a Polish Jewish immigrant whose family was victimized by the Holocaust. That heritage underscores something very important about Bernie Sanders: his honesty, integrity, and issue-orientated approach to policymaking. Because alone among the candidates Sanders has had the political courage to condemn Israeli racism and repression of Palestinians, he will confront AIPAC and the right-wing Zionist lobby with a choice of supporting vicious authoritarians, Trump and Netanyahu, or backing a progressive more aligned with traditional American Jewish liberal values.

Nine months is an eternity in politics and many things can and will happen. But whatever happens, the American left is back in mainstream politics--and perhaps for good, in more ways than one.