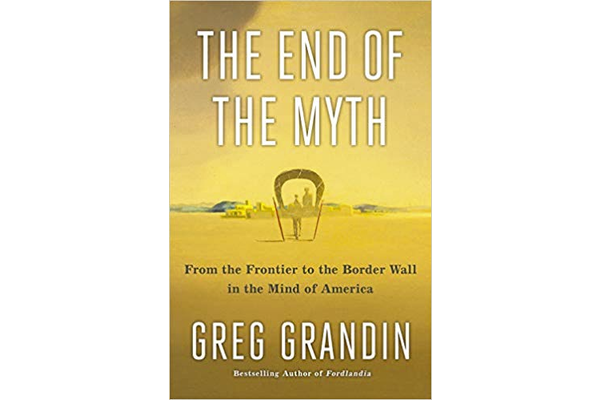 “History makes what happened comprehensible by reducing events to a dramatic pattern and seeing them in a simple form,” wrote historian Johan Huizinga some one hundred years ago.

To establish dramatic patterns for their readers, historians often use first-person accounts, statistics or suspenseful chronologies.  In his new book, The End of the Myth: From the Frontier to the Borders in the Mind of America, Greg Grandin has chosen as a foil a single, 130-year-old journal article to illustrates the changing perception of the American frontier and its role in promoting systematic racial violence.

The article in question, The Significance of the Frontier in American History written by historian Frederick Jackson Turner in 1893, is arguably the single most important essay on U.S. history ever published. In it, Turner theorized that “the existence of an area of free land, its continuous recession and the advance of American settlement westward explain American development.”

Turner believed the nation’s constant expansion enabled Americans to overcome sectional and religious divisions and develop a culture that encouraged individualism, self-sufficiency, and a capitalist economy.

According to Turner, “this perennial rebirth, this fluidity of American life…. the simplicity of a primitive society, furnish the forces dominating American character.”

For example, Turner believed the popularity of the frontiersman in early American culture contributed significantly to the election of Abraham Lincoln (“the rail-splitter”) and indirectly to the eventual abolition of slavery.

As useful as Turner found the frontier, the significance of his article lay in his contention that that “the frontier has gone and with its going has closed the first period of American history.” He based his argument on the 1890 census which concluded that because so many areas of the American west had been settled, the term “frontier” could no longer be used as a geographical construct in federal reports.

Grandin, a Yale University history professor and the author of well-regarded books the slave trade and auto maker Henry Ford’s forgotten jungle city, Fordlandia, has taken Turner’s concept and turned it on its head. Where Turner saw the frontier as a positive force, Grandin sees it as a malignant evil, a myth that encouraged racism and stimulated rapacious capitalism.

In Grandin’s account, the myth associated with the unsettled frontier helped set off the Revolutionary War. When the 1873 Treaty of Paris was signed, the Founders inherited a 1,200-mile border between the region settled by Europeans and the area occupied by Native Americans.  The British had negotiated with Indian tribes as if they were sovereign nations and George Washington generally followed this practice.

However, this did not stop Washington, Thomas Jefferson, James Madison and other leaders from speculating in frontier land. Thus, the first six presidents governed with the contradiction of “wanting it all (the land) but not wanting to do all it took (e.g. genocide) to have it all.”

The charade of honoring Indian treaties abruptly ended with the election of Andrew Jackson in 1828. Jackson, a veteran of Indian wars, initiated the “Trail of Tears,” a massive removal of thousands of Native Americans from 25 million acres of land in Mississippi, Alabama and Georgia.

With this massive displacement accomplished, the meaning of the word “frontier” changed.  The word ceased to be a simply “a line on a map” and became a “way of life” and a reason to subjugate both “enslaved and dispossessed peoples.” Grandin quotes newspaper editor Horace Greeley, who told his readers that “God has given the earth to those who will subdue and cultivate it.”

After the Mexican War ended in 1848, the newly expanded frontier again became a source of tension as Americans argued over how to settle the new territory. Southerners planned to expand slavery in the new states, while New England abolitionists sought to keep them as “free” states, available to whites and blacks alike.  Despite the victory of the North in the Civil War and the abolition of slavery, the western states soon became sites of further exploitation of people of color and the continued extermination of indigenous people.

From 1848 until 1914, the 2000-mile southern border with Mexico generally remained unmarked and unfenced, a land of sagebrush and jack rabbits. The economic expansion of World War I, however, led to armed border crossing points as the government sought to control Mexicans coming north for jobs.

In Grandin’s view, the border with Mexico became in the American mind “a repository of the racism and brutality” that frontier theorists said had been left behind.  With “Anglo-Saxonism literally pushed to the margins (geographically),” white supremacy turned inward, leading to increased aggression towards minorities such as the lynching of African Americans.

In the second half of the twentieth century, the myth of the frontier evolved into a drive for Anglo-Saxon conquest overseas and prompted a series of unwinnable wars (e.g. Vietnam, Iraq).

Thus, Grandin’s book paints an exceedingly grim view of American history. However, his contention that the frontier “mirage” explains virtually every aspect of the last three hundred years of American history is both reductive and overblown.

It’s inaccurate to state that the Vietnam War was lost simply because American forces found it “impossible to control the border” dividing North and South Vietnam.  Another far-fetched claim is that George W. Bush started the first Iraq War not to liberate conquered Kuwait, but rather because he felt the same need to extend “Anglo-Saxon control” that drove settlers to the American west in the 1800s.

Moving forward to the Clinton era, Grandin asserts that the push for NAFTA was just “an extension of the Gilded Era confiscation of land and resources.”  He fails to acknowledge that many proponents of NAFTA sincerely saw it as a way to increase prosperity in both America and Mexico.

With these multiple mischaracterizations, Grandin’s book slips from being a thoughtful critique into a polemic against all forms of America’s economic and cultural expansion.

Larry McMurtry, the author of Lonesome Dove and some 42 other books (fiction and nonfiction) about the American west, alluded to this fact in a 1990 essay in The New Republic.

He cautioned that by emphasizing tragedies, some historians overlook the bold dreams and romantic hopes that drove so many individuals, including people of color, to start a new life in the region. The creators of what McMurtry called "failure studies" had themselves failed, he said, "because they so rarely do justice to the quality of imagination that constitutes part of the truth" about the west.

Grandin has followed Huizinga’s contention that history needs to be reduced to a dramatic pattern to be understandable. Unfortunately, with its emphasis on negative consequences and exclusion of positive outcomes, The End of the Myth falls into McMurtry’s category of a failure study. In attempting to debunk one myth about the American frontier, Grandin is in danger of creating a new one.