How the US repeatedly failed to support reform movements in Iran

How the US repeatedly failed to support reform movements in Iran 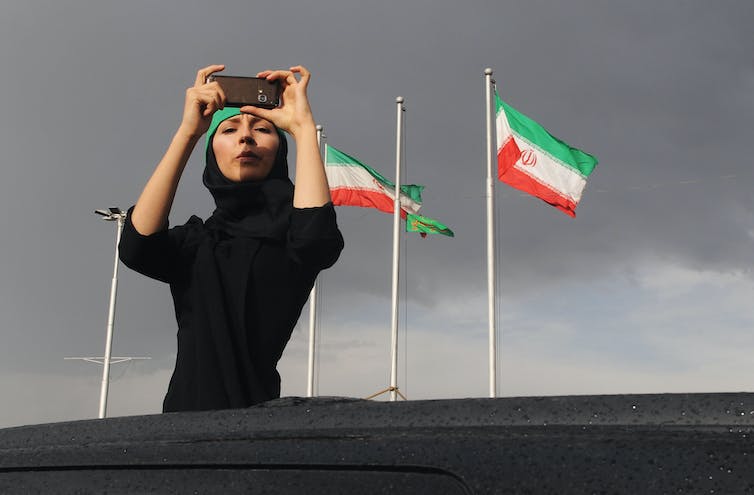 A demonstrator protesting a disputed election wearing a headband in support of the Green Movement, Tehran, June 15, 2009. Kaveh Kazemi/Getty Images

After decades of conflict, recently escalated to near-war, it appears there’s little chance that U.S. relations with Iran will ever improve.

For 40 years, the relationship between the U.S. and Iran has been marked by disagreement – but also by a series of missed opportunities.

Over the past two decades, a number of organic Iranian activist movements have steadily been growing stronger.

If, as Secretary of State Mike Pompeo alleges, the U.S. has been worried about the Iranian regime for the past 40 years, why didn’t U.S. policies and policymakers support Iran’s numerous voices – growing louder and larger – calling for support to overthrow the hardline Islamists in power? 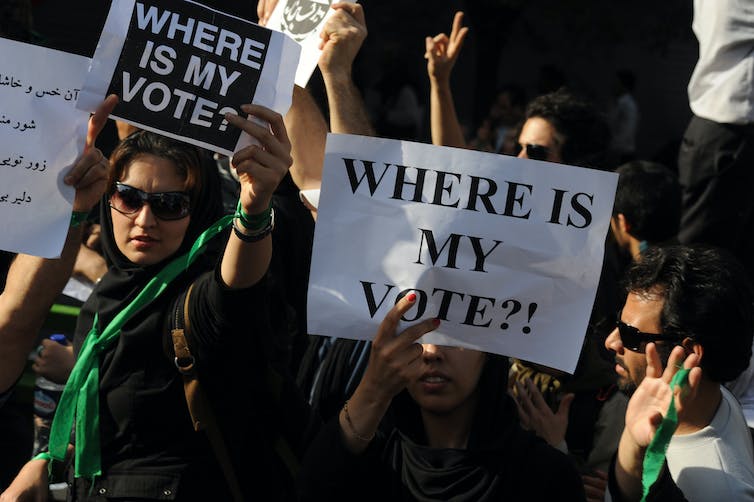 Demonstrators claiming their votes had not been counted in a recent election march in Tehran, June 17, 2009. Kaveh Kazemi/Getty Images

Engagement is not the same thing as intervention. Engagement can mean support – including support of the causes that the majority of Iran’s population were calling for – from the entire global community.

And the support that many called for could help the people of Iran hold the regime accountable.

Iranian activists need international support to hold their government accountable. For instance, the Canadian and Ukrainian governments joined Iranian citizens’ calls for investigation into the downing of Flight 752.

Despite the monolithic portrayal of Iran by people like Mike Pompeo, John Bolton, or even historian Samuel Huntington as diametrically opposed to all things “Western,” on many ordinary Iranians – young people and activists in particular – share important values with Americans. Iranians who have been taking to the streets for the past several years have been calling for things like human rights, equality, women’s rights and government accountability.

And while the two governments have been in conflict, Iranian students at universities have welcomed dialogue with their Western counterparts.

Between 2000 and 2008, I spent extensive periods in Iran conducting research with young people engaged in what they called a “sexual revolution,” or “enqelab-i-jensi” in Persian. These youthful Iranians rejected the regime’s tyrannical control of the bodies of its people.

One example of the regime’s power: mandatory dress codes for all. The regime wanted to restore a moral order by rejecting what it viewed as a toxic infatuation with the West, or “Westoxification.”

As young activists – men and women alike – they resisted the regime by using their bodies to make a statement.

In 2009 many of the same young people who were active in the sexual revolution spilled into the streets in the thousands to protest the re-election of President Mahmoud Ahmadinejad.

A product of the hard-line Islamist movement, Ahmadinejad represented a move away from the opening up that his predecessor, reformist President Mohammad Khatami had introduced. Activists felt that in addition to moving the country backward, Ahmadinejad had won the presidency through election fraud.

This was the beginning of the Green Movement, a civil rights-type movement that took the country by storm.

Young and old poured into the streets, wearing green, chanting “not my president” and calling openly for regime change. The Green Movement was one of the largest organized resistance efforts the region had seen in decades, and was important in laying the ground work for the Arab Spring.

Young Iranians were at the forefront of the Green Movement, calling for transparency in government decision making and elections. They begged the world for support, but few responded.

The U.S. preferred a more “hands off” approach. While Iranian activists had hoped that President Barack Obama would take a strong stance and call out the election fraud, when he did speak, his message was cautious.

“The world is watching and inspired by their participation, regardless of what the ultimate outcome of the election was,” said Obama in 2009.

Many activists in Iran believe that the Green Movement was a missed opportunity for members of the U.S. government to strongly support a resistance that could have forced the regime to reckon with its poor record on issues such as human rights and women’s rights.

Pushing back the hijab

In the years before and after the Green Movement, feminist activists continued to publicly call for regime change, often by highlighting the regime’s unequal treatment of women.

Between 2007 and 2009, many of the activists involved in the One Million Signatures campaign – a campaign in support of women’s equality – turned their efforts to the impending election of 2009, and then, subsequently, to the Green Movement.

In 2014, a social media campaign with the hashtag #MyStealthyFreedom spread rapidly, featuring images of Iranian women photographing themselves in public without their hijab. In 2018 public protests against mandatory veiling swept the nation, with women standing publicly without headscarves in protest.

Again, Iranian feminists called for global solidarity. Again, the global community – including the U.S. – didn’t respond. While public endorsement may have made it easier for the regime to accuse protesters of being in the pocket of the Great Satan, as they called the U.S., a call on the regime to be accountable to its people by engaging local activists could have positively affected their cause.

The resistance of feminist and human rights activists may have started out in the late 1990s in urban parts of the country – Tehran, Shiraz, Esfahan – among young people who for the most part identified as secular. But calls for regime change steadily increased across the entire country.

The Green Movement’s themes resurfaced in late 2017 and early 2018 in protests triggered by a rise in gas prices. Millions of people of diverse socioeconomic backgrounds – including those who were secular as well as religious – marched in the streets to protest the government and demand equality, accountability and transparency.

Another round of protests have erupted in the past few weeks since the U.S. killing of Iranian General Qassem Soleimani and the Iranian regime’s response, which included the downing of Flight 752. When protesters spilled into the streets, Trump responded by applauding them, decrying the regime, and citing the protests as evidence of his strategy at work.

But Trump’s words rang hollow. This was not the kind of engagement that local activists wanted. It yoked their cause to Trump himself – a leader who can easily be profiled by the regime in power as a living embodiment of hostility to Iran.

So as Iranians pour into the streets again, many of them are likely wondering why the U.S. has been passively watching – issuing a destructive tweet here and there – rather than engaging with progressive, liberal movements for change.