by Shawn Flynn and Kristine Garroway

A replica of Nubian Tribute Presented to the King, Tomb of Huy, showing Nubians with their children paying tribute to the Egyptian Pharaoh. Based on the original from circa 1353–1327 B.C. (Wikimedia), CC BY-SA

The choices that societies make concerning the treatment of children can bring about the greatest of debates and prompt significant political action. Our research teaches us that the question of a how a child should be treated — what value societies place on children — is not only a modern question, but an ancient one.

As historians whose work is related to understanding the texts of the Hebrew Bible and the world it was written in, we trace clues to understand the lives of children over 3,000 years ago. Through data from archaeology, letters, contracts, laws, material culture, ancient stories and religious practices, we study the children in the ancient lands of the Middle East, in the region now encompassing Egypt, Israel and the West Bank, Lebanon, Syria, Iraq, Iran and Turkey.

In our recent research we learn how children were both valued and vulnerable — in many ways, similar to children today.

Children experienced violence and vulnerability at the hands of adults. And the same adults wove a child’s religious and economic value into society through laws, religious expression and what happens in homes.

For ancient people in the region we study, the focus on children began before children were conceived. Without modern medical practices, women turned to their medical world, and thus magico-religious answers.

Texts from the Hebrew Bible and Mesopotamia relate that when women had trouble conceiving, they might use plants, like the mandrake, known to increase fertility, or prepare fertility aids.

After children were born, women continued turning to magico-religious practices to protect the child. Scholars believe fertility figurines found in archaeological contexts attest to mother’s prayers for ample milk supply. Most women would nurse on demand, but breast-feeding contracts tell us that the wealthiest families could afford to employ wet nurses, since even they knew breastfeeding could limit fertility.

Mesopotamian texts contain an intricate series of contracts and laws outlining the years children spent in the wet nurse’s house, and the consequences if the wet-nurse tried to steal the child. These contractual forms are embedded in later Biblical stories. 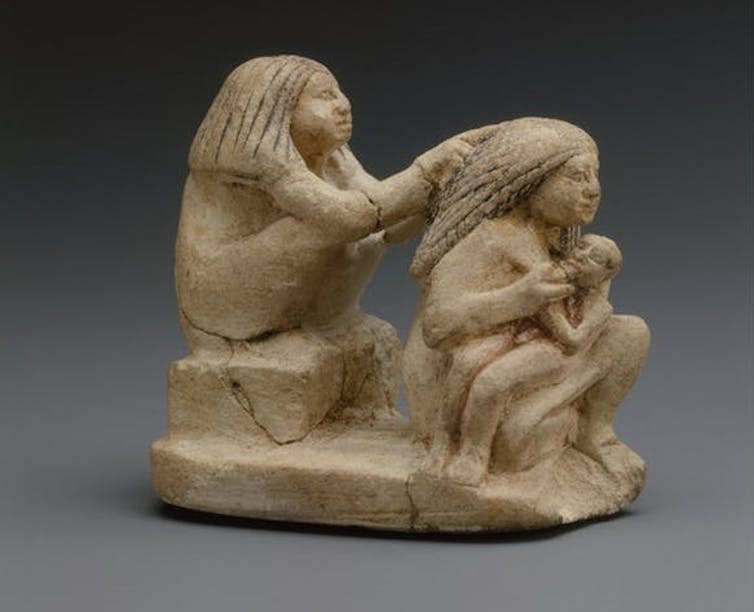 Group of two women and a child, ca. 1981-1500 BC. A woman is shown nursing her child while another woman dresses her hair. (The Metropolitan Museum of Art)

Children in the home

The sleepless child was well known to parents. In the ancient world lullabies were used to calm inconsolable infants. For example, in one old Babylonian lullaby written sometime between 1894–1595 BC, the sleep-deprived mother begs the child to fall asleep like one passed out drunk.

Biblical studies professor David Bosworth of the Catholic University of America discusses this in his book Infant Weeping in Akkadian, Hebrew and Greek Literature.

But sleep, while desired, also brought with it danger. Scholars believe that what we know today as Sudden Infant Death Syndrome was attributed by the ancient people in this region to the demoness Lilith or Lamashtu creeping in the house and suckling the infant with poisonous milk. Various amulets warding off this demoness have been found in sleeping chambers, along with a lamp, which like today helped scare away “bad things” that went bump in the night.

Play was an important part of life. Small perforated discs found in some parts of the region suggest the use of spinning tops.

Mesopotamian texts speak of familiar games, like jump ropes, wrestling, running races and games of hide and seek. But life was not all play for children. For the most part, older girls would help the mothers with domestic activities, while boys would follow in their father’s footsteps. But for a limited few male children, education was an option.

But children also moved in and out of domestic units. Adoption and slavery are social institutions that are well-documented in various contracts preserved in libraries from the ancient cities of Nuzi Emar and Nippur.

The ancient poem, Enki and Ninmah, encourages parents to adopt children with deformities: this poem, over 4,000 years old, has the gods ordaining a place in society for all, even those with deformities.

The ancient Babylonian code of law, the The Code of Hammurabi, laws 18 5-191, shows that formal adoptions came with a strict set of rules so the child could be fully integrated into the new family.

Sometimes parents rescinded legal responsibility for a child. One set of texts discusses this as children “thrown to the dogs’ mouth.” In such cases children might be left at the local dump, the “safe-drop” zone for children. These children often entered a life of slavery.

Individual slave sale documents from Mesopotamia, as well as the biblical laws concerning slavery, tell us that slavery was a part of ancient life, but there are important nuances. Not every child slave was chattel. In cases of debt-slavery, a child could serve in another household to pay off a family debt and then return to their own family.

A child’s value was not just part of the physical world, but extended to the spiritual realm as well. Children participated in the household religion in gender-specific ways. A disinheritance contract from Emar notes that children who are disinherited lose the right to care for the gods of the house. 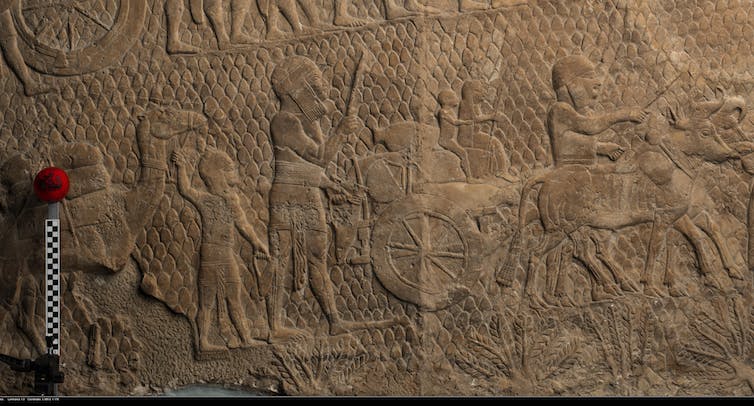 The death of children

A child’s value does not come without vulnerability. As the youngest and most defenseless members of society, they were not immune to the effects of invading armies. Mesopotamian war records (ca. 880-600 BC) demonstrate rare but violent practices, such as burning adolescents and violence against pregnant Arab women. In best-case scenarios, children were deported with their families. 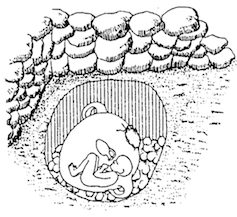 Archaeological data shows that the infant mortality rate was 50 per cent in the ancient world, but children who died were often cared for. Sometimes they are buried in jars with the common grave goods indicating their status in the family. And other times they were buried under the household floor, which in a way kept them a part of the household unit.

Ultimately, coming to a greater understanding of children in history raises important questions for how societies respond or not to children’s vulnerability. The challenge of protecting our most vulnerable has not disappeared.