Linda Przybyszewski is an Associate Professor at the University of Notre Dame. She is the author ofThe Lost Art of Dress: The Women Who Once Made America Stylish and received her PhD in U.S. History at Stanford University. Visit her website. 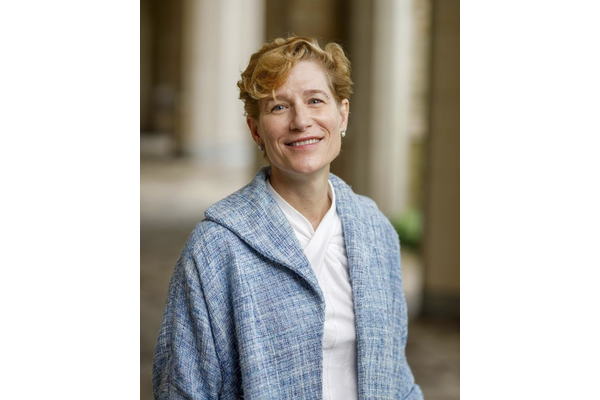 I have such a mix going on right now. I have a book to review: Ken Kersch’s Conservatives and the Constitution: Imagining Constitutional Restoration in the Heyday of American Liberalism. He’s arguing that conservatives of various stripes created a coherent and popular tale of the meaning and history of the constitution in the years after World War II when liberalism was dominant. He points out that the intellectuals among these conservatives made a point of writing for a popular audience and still do, and since most academic scholars make no effort to that day, it’s a lesson in public influence to me as well. It’s a history book by a political scientist and it’s always interesting to me to see how people reach across fields (or don’t). I was impressed by the introduction and how complicated he can make a sentence, and still make it perfectly clear.

I also am reading April is the Cruelest Month by Louise Penny, one of a mystery series set in a small town in Quebec. Since I speak French and am married to a hockey fan, I am enjoying those elements, as well as the author’s love of good food. Although I am a bit worried about all the people who must be murdered in one small town for the series to continue. You’d think they’d start to get nervous and move out just to be on the safe side. Then I’m working through a stack of vintage sewing pattern books. I’m a new knitter and I’m intrigued by the techniques, and their history. While writing The Lost Art of Dress I realized we had lost so many sewing and drafting skills, and now I see the same thing happened with knitting.

One pattern book that I date to the 1940s has entire dresses and suits made from sock yarn, which is tiny, and you realize the immense skill and patience they had to make such things. Today, we tend to use much larger yarns for sweaters--3 or 4 times as thick--and it’s very rare that anyone tries to knit a dress, much less one out of tiny yarn. As you can imagine, the results are often far less sophisticated. Also, the vintage patterns clearly assumed a certain amount of knitting know-how from the start, which is also true of sewing patterns from the period. Women simply knew more about creating with their hands, and their hands knew more.

I was in an interdisciplinary program as an undergrad. Part history, part literature, part philosophy. I really enjoy literature too, but I couldn’t see studying it as a scholar. I remember reading the title of some dissertation in English Literature that studied punctuation in a play of Shakespeare. I thought, hmmmm… not really my speed, probably this not the field for me. I wrote a senior thesis on Pullman town, which I got to visit. George Pullman meant so well, but he ended up sparking the biggest railroad strike anyone has ever seen. I was already intrigued with what values and beliefs people at on. I’m still working on that: how people invoke the power of the state in the name of their values.

Curiosity. Most of my research projects started, by reading some source, scratching my head and thinking, what the heck is going on here? That and the ability to be perfectly happy spending some time alone following your nose. Although that can become a bit of a problem because you need to learn when to stop following your nose and tell yourself that you know enough. Otherwise, you can’t finish writing a book or an article. Since The Lost Art of Dress was written for a trade press and for non-academics, I realized that we ought to write more as journalists do: to a large audience, without the 3 qualifying adverbs for every verb that so many scholars insist upon. Of course, teaching takes a different set of skills than research, but sometimes it captures the same spirit as writing for a large audience—you have to figure out how to explain something like “due process” to people who have never heard the phrase. And you have to do it quickly and clearly.

One of the memorable experiences was taking a first-year class to the Abraham Lincoln Presidential Library and Museum in Springfield. It’s a fascinating place that makes the most of technology. Since we only hear praise for Lincoln these days, some of the students were shocked to walk into one passageway that had actors reading some of the nasty things people wrote and said about Lincoln and his wife, some of posted up on the walls too. I remember a young woman turned to me in surprise, and said, “They HATED him.” The look on her face. Since the class focused on the difference between popular history and academic history, it was a great teaching moment. The legend of Lincoln makes him beloved, but it is so different from the reality that he lived.

That we keep making the effort to write and speak on our relevance to today’s issues. It’s not just our research although one of the reasons I am writing a book on the Cincinnati Bible War of 1869 is to remind people that the religious-minded as much as the secular have a lot to lose if they allow the state to prefer one religion over another. It’s the teaching too. I remember walking into a classroom to teach Era of the US Civil War and Reconstruction and the whole Confederate statute controversy was on the front page of the papers.

I can bring in any local or national paper these days and one of the articles will touch on issues we wrestle with in my class on Crime, Heredity and Insanity in American History. I ended that class last term by reminding everyone they were all citizens of some country, called on to make decisions about the policies of their criminal justice system, that none of those decisions would be easy, but at least from this course they had an idea what the costs, what the ramifications would be. I don’t live in an ivory tower and neither do they.

The Lost Art of Dress started with a find in a used book store. An old dress and sewing textbook from the 1950s which taught both the art of dress and the craft of sewing. I started looking for the “further readings” listed at the back of each chapter. And once I started looking for them, I found old sewing magazines too, and they repeated the same lessons as the textbooks. It turned out there are so few large library collections of sewing publications that I ended up collecting them myself. Since I am also a dressmaker, I find them endlessly inspiring as well.

The earliest ones date from the 1880s with the floor-length skirts and the tight bodies, but my favorites are sewing magazines from the mid- to late-1930s. Yes, the world was in the midst of a horrible depression and careening towards global war and all I can think is, “This dress looks fabulous!” Partly, it’s the relief of getting away from the 1920s look which put belts at the waistline and repressed all womanly curves; partly, it’s the sheer intelligence of much of the design. I think the designers knew women were going to have to have very small wardrobes for a while, so they made each dress into something worthy wearing over and over again.

I also have collected hundreds of vintage patterns in order to study both design and construction and I have made a lot of them. I do steer away from collecting actual garments, although some of my readers have sent me some, but a real costume collection would need to have proper humidity and temperature controls. And there is no way that I am up to that.

So many sources, too little time!

Speaking of sources. The available databases of 19th-Century sources are so amazing. Work that took forever on microfilm in the basement of some library can now be done quickly anywhere you have an internet connection. Books that were rare and now right there online. It will make work both harder and easier; searching is so much easier, and now there are lots of possible quantitative research possibilities, but we may forget the limitations too. I have to keep reminding my students that these things are amazing, but that only some of the evidence from the past is online.

Of course, then there is the problem of students Googling everything because they think that is THE Answer. I tell them: Think of Googling as walking into a hoarder’s garage: you may stumble across the whole run of Encyclopedia Britannica, or you may find a dead cat.

“The 11th Commandment: Know Thy Place” which I made up in order to get across to students how different it was to be born into an early modern society where who you could presume to be and what you would presume to do were usually limited by who your daddy was or what color or sex you were. Historians call it an ascriptive society, but I think students grasp the commandment better. It’s always difficult to get across the assumptions people had in the past; why certain ideas would rarely occur to anyone or appear absurd when they seem perfectly natural to us.

I am continuing my work on two tracks: one law, one fashion. I need to finish my book on the Cincinnati Bible War which happened in 1869 when the city’s school board ended daily Bible reading in the public schools. All hell broke loose in the press, the Catholics got blamed, and conservative Protestants sued to keep the Bible in the schools. Scholars say that when the Ohio Supreme Court ruled for the school board, secularism triumphed. But that’s wrong. The ruling invoked Christ and “Christian republicanism” as well as James Madison. The idea was that religious belief cannot be compelled. It reflected the arguments of the anti-Bible attorney, Stanley Matthews, who had converted to Calvinism after four of his children died in a terrible scarlet fever epidemic.

I’m also working up a plan to write a history of American fashion from the colonial era onward, fashion as a reflection of its times.