The Runway for Global Warming: The Suez Canal's 150th Anniversary

On Barak is the author of Powering Empire: How Coal Made the Middle East and Sparked Global Carbonization. 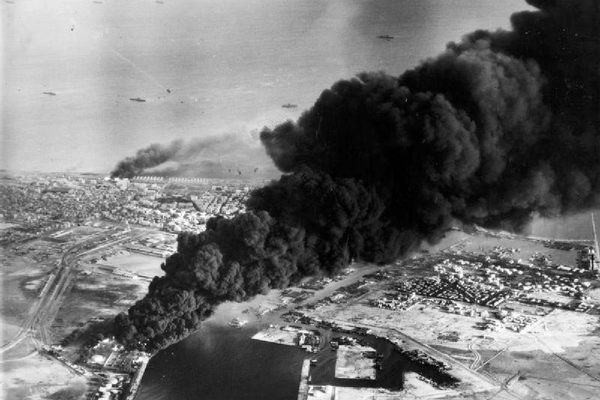 Smoke billows from oil tanks next to the Suez Canal, 1956

The grandest party of the nineteenth century took place on November 1869 and we are all still hungover. The artificial connection of the Mediterranean to the Indian Ocean was inaugurated exactly 150 years ago with great pomp, including a Verdi opera commissioned especially for the event. It stimulated international commerce and communication, but also helped unleash the process of global carbonization – the worldwide spread of fossil fuels, first coal and then oil, as well as devices and lifestyles predicated on burning them. Grasping the history of this nineteenth-century infrastructure in the Middle East is therefore crucial for charting a course for global decarbonization.

This is partly because physical environments are inseparable from the technologies that traverse them and the fuels they consume. An “inauguration” suggests a single event. Similarly, we tend to consider the Suez Canal as a distinct stable object. Yet both were and still are moving targets. For more than a decade before the inaugural ceremony, French entrepreneurs built up in Egypt the largest concentration of mechanical energy in recorded history anywhere in the world, for digging and dredging the canal. Deepening and broadening this waterway continued long after the ceremonial opening and actually never stopped. The canal might have not opened the floodgates to the age of the steamship and later the oil tanker but it certainly kept expanding the crack, with every enlargement allowing bigger and heavier ships to be designed. Egyptian president Abd al-Fatah al-Sisi’s 2015 launching of a second, parallel canal project, represents the last instance in a century-and-a-half-long process.

Historians have usually thought of the canal in contexts other than climate change. Before our present and future were colored by impending catastrophe, our view of the canal’s past was marked by the fanfare of its inauguration, an event so extravagant – the guest of honor, French empress Eugénie, was hosted in a replica of her private apartments in the Tuileries– it contributed to bankrupting Egypt. Others evaluate the canal through its relationship to a key commodity: long-staple cotton. The American Civil War and the resulting disruption of cotton cultivation in the U.S. South caused the global cotton market to shift to Egyptian growers, sparking an economic boom that financed the canal. The social sciences wove out of such global cotton threads a notion of the  capitalist world system tailored along the lines of raw and processed; as a world divided between agricultural peripheries like Egypt, sending raw materials for processing in industrial centers like England.

But there was another substance, coal – the mother of all raw materials – that disrupts this scheme. Not long after the coal-fired industrial revolution in the British Isles, another revolution in agricultural “peripheries” such as Egypt was predicated on British coal. The industrialization of Egyptian agriculture relied on imported coal for cash cropping cotton which was irrigated with steam-powered pumps, loaded onto railways and then onto steamers that shipped it to Lancashire’s mils. The Suez Canal was crucial in these global coal-fired entanglements. Offering a hyphen connecting the British Empire to its Indian Crown Jewel, it significantly shortened travel times and facilitated the flow of British coal to the east, injecting this substance to economies predicated on more sustainable driving forces. The new artificial passage to India that replaced circumnavigating the Cape of Good Hope literally created the “middleness” of what would thereafter be thinkable as “Middle East”. The canal also annexed this region into the fossil fuels complex. The connection would prove all the more significant in the age of oil in the early twentieth century. Liquid fuel now flowed in tankers in the other direction, from the Middle East westwards, but again along the canal.

The constricted waterway of the canal gave shape to the steamship by promoting rear propellers and demoting side-wheelers that bumped against its narrow banks. Other features of the canal also changed the shape of ships; for exam­ple, there were significant price differences for coal east and west of the canal. As long as the canal’s depth forced heavy ships, when fully loaded, to replenish their supplies east of the canal, light steamers had the advantage in terms of money and coaling time. As the canal was gradually deepened, it propelled an increase in the size of steamships, just as the ships’ size encouraged its deepening. Finally, the canal fastened together an artificial archipelago of coaling stations that sprang up around mid-century in a reverse domino effect in equal distances between Gibraltar, Malta, Port Said, Aden, and Bombay. It is undoubtedly one of the key carbon fibers that underpin our current planetary crisis.

The hubris of altering the world to sustain the flows of maritime capitalism, imperialism, and fossil fuels was part of a new imperialist mindset focused on making previously unlivable habitats ready for human colonization. Port Said, a vast coaling station at the Mediterranean mouth of the canal (alongside Aden, another such station to the southeast) was one of the first places in the world dependent on coal-fired compressors for desalinated water. As early as the 1850s, this technological fix supported an army of canal diggers and later colonial garrisons. Thus nourishing expanding populations in arid environments came to characterize European imperialism in the region. In the twentieth century oil slipped comfortably into coal’s boots on the ground (and the U.S. into British ones) so much so that life in the Arabian Peninsula and elsewhere in the region is now unthinkable without water desalination dependent on fossil fuels.

Alongside proliferating coal and oil the megaproject jeopardized biodiversity and accelerated species extinction. The titanic steamers it promoted had a buoyancy problem inherent to burning their fuel supply. This caused them to rise in the water to the verge of capsizing. To compensate for this upsurge, ballast water started being used and dumped in different ports of call. That is, until the procedure was recognized as a key vector for marine pollution. Moreover, the artificial saltwater passage between the Red Sea and Mediterranean not only created the first physical connection between these bodies of water and marine ecosystems, but also standardized their salinity and temperature. Ecological barriers that kept the Mediterranean insulated were now breached and a migration to the Eastern Mediterranean of invading species from the Red Sea and Indian Ocean began en masse. Marine biologists call it Lessepsian Migration after Ferdinand de Lesseps, founder of the Suez Canal Company. Biologists recently discovered an invasive crab that traveled via the canal and now infests Israel’s desalination plants. Such underwater trails on Mediterranean sand are also among the carbon footprints of the canal, blending together several historical trends that often happen under our radar. To promote a global vision for decarbonization today requires mapping such historical pathways and the ongoing implications of the globalization of carbon energy.

For more by this author, read: 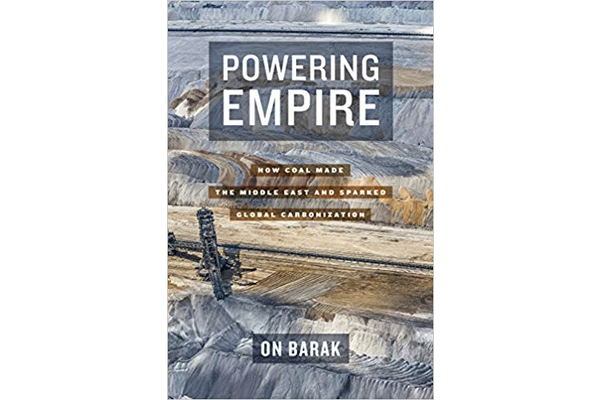