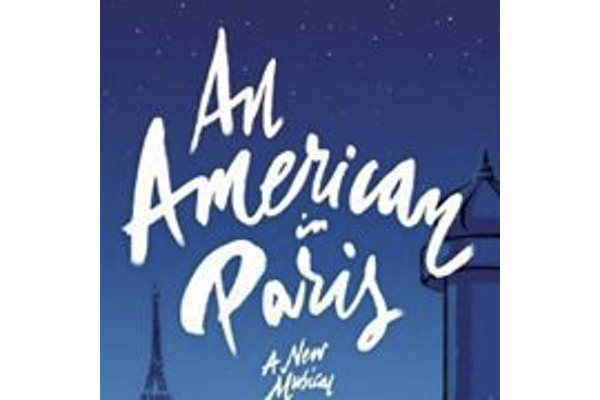 Jerry Mulligan was an American GI artist who elected to live in Paris when World War II ended and the City of Lights was free of Nazi occupation. The talented painter produced work after work in his studio but his career alongside the Champs Elysee was going nowhere. Then he meets a songwriter, Adam Hochberg. They are searching for love and then the gorgeous dancer Lise Dassin arrives like the sun rising over the Seine River on a warm Paris morning.

Shortly afterward, Jerry meets Milo Davenport, a good-looking, rich American art patron who has a deep desire for his paintings and a deeper desire for him. Romance is in the air.

Well, yes and no. The story of Jerry and his two women, set to scrumptious music by George and Ira Gershwin, is the heart of the play An American in Paris, with book by Criag Lucas, that just opened at the Westchester Broadway Theater, in Elmsford, New York. It is an enthralling, eye pleasing and tune popping  show featuring several really talented singers and dancers. It gives the audience a wonderful look at the art scene in Paris and a history of post war Paris that was artistically rich but economically wobbly.

Everybody remembers the An American in Paris movie, that starred the brilliant singer and dancer, Gene Kelly. It premiered in 1951 and is shown on television frequently (I saw it again two weeks ago). It is a story that has many twists and turns and leaves you with the feeling that all is lost between Jerry and Lise, the love of his life.

But wait…..this is a Hollywood musical…

I saw An American in Paris on Broadway four years ago. It was a wonderful show. I wanted to see it again, in upstate New York, because the musical is being produced in a very different theater, one with the audience on three sides of the stage, and I wondered how they could stage such a Broadway-perfect musical there. Well, they have.

It is surprisingly good, a musical ice cream sundae, with all the toppings. The director of the show,  Richard Stafford, added two small stages  at the sides of the main stage to serve as platforms for vignettes. The play starts on one, with songwriter Hochberg serving as the initial narrator of the story. Later Jerry, on one side stage, falls in love with Lise, on the other, when they meet in a Paris street crowd. It houses other scenes too. Stafford also really spreads out the show as the performers play to all three sides of the audience.

The story is simple, yet complex, as all historical tales seem to be. Jerry tries his best to win the heart of ballet fledgling Lise, but cannot. That’s because she has a deep, dark secret, still lingering from the war. He gives up after many efforts to charm her. Milo Davenport, bound and determined to win Jerry’s heart, does everything she can for him and appears to be well on her way down the aisle. But…

Audiences  in upstate New York, like audiences everywhere, revel in the gorgeous music of An American in Paris, that includes memorable songs such as  I’ve Got Rhythm, The Man I Love and ‘S Wonderful.  In addition to the music, the play has marvelous choreography, supervised by Stafford as well. The famous seventeen minute long ballet at the end of the play, something Gene Kelly insisted on, ends the show. One complaining member of the audience said that the show “has too much dancing.” Yes, and Muhammad Ali’s fights had too much boxing.

There is a lot of history in the play. Milo continually criticizes Parisians who collaborated with the Nazis during the five years of occupation. There is history about the good people of Paris, and France, who hid Jews in their homes and about the resistance fighters that battled the Germans from the shadows. You learn much about the old café days of the 1920s in Paris and the troubled efforts to revive them in 1945.

Director Stafford gets superb performances from  Deanna Doyle as dancer Lise,  Tommaso Antico as songwriter Hochberg,  Jonathan Young as Henri Baurel,  and Lauren Sprague as Milo Davenport. The star of the show, though, is the spirited and gifted Brandon Haagenson as Jerry Mulligan. Like Gene Kelly, he dominates the story from start to finish. Haagenson, like Kelly, is a good dancer, actor and singer. He plays the role as his own, though and does not emulate Kelly.

An American in Paris is a complicated story of a man who loves a woman. You cheer for lovable Jerry, fear for Milo and Lise and their futures and, most of all, swoon in your chair listening  to Gershwin’s showstopper ‘S Wonderful.

After Jerry, LIse and Milo sing and dance their way through the story, you say to yourself, well, Paris will never be the same.

Oh, yes it will. Thank God for that.