The Moral Compass of America’s Most Distinguished Soldier and Statesman 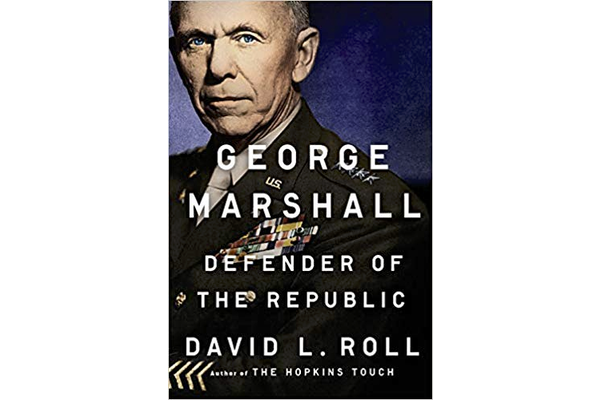 Although he was a career Army officer and “the architect of victory” in World War II, George Marshall’s name today is best known for an act of peace: the launching of a massive European aide program in 1948. The success of the Marshall Plan (which cost more than $100 billion in today’s dollars) earned him the 1953 Nobel Peace Prize.

In his new biography, George Marshall, Defender of the Republic, David L. Roll provides a revealing portrait of the man who served prominently in World War I and guided U.S. strategy in World War II and the early stages of the Cold War.

David Roll, an attorney and author of two other books on World War II leaders, The Hopkins Touch: Harry Hopkins and the Forging of the Alliance to Defeat Hitler and Louis Johnson and the Arming of America, has meticulously researched archives across the U.S. and in the U.K. Roll significantly expands on the three previous biographies of Marshall and in a few cases, contradicts some of their conclusions. For example, he debunks the myth that Marshall had a “feud” with General Douglas MacArthur.

Roll’s biography is in some ways a nostalgic look at a time of American greatness and a reminder of how effective our tradition of civilian oversight of the military can be when it is run by mature leaders who subordinate their own interests to those of the American republic. Without stating it directly, the book offers a startling contrast to the present, when a narcissistic president routinely dismisses senior military advisors who dare to disagree with him.

Marshall was appointed Army Chief of Staff by President Roosevelt on September 1, 1939, the same day Hitler invaded Poland. As a top planner for General Pershing in World War I, Marshall was horrified by the drastic cuts his beloved Army endured in the postwar years. He was initially suspicious of Roosevelt, whom he viewed as a cunning politician, unwilling to take on the unpopular (and expensive) effort of building up the U.S. military.

In May 1940, with Hitler poised to conquer France, Congress cut $10 million from a desperately needed military appropriation. Marshall quickly went to the White House and bluntly told Roosevelt, “You’ve got do something and you’ve got to do it now.”

Roosevelt often recoiled from specific demands, and some of the President’s aides were shocked by Army chief’s boldness. But Roosevelt respected Marshall’s candor and immediately committed to a major increase in military spending.

In 1942, a dark year of many Allied defeats, Roosevelt came under repeated pressure from Winston Churchill to withdraw the beleaguered U.S. Army forces in the Pacific and send them to the European theater. Marshall resisted, insisting America must be able to fight on two fronts. FDR supported him and MacArthur’s forces were built up and soon claimed a series of victories.

In late 1943, when it became time to appoint the supreme commander of the long planned Allied invasion of Europe, Roosevelt hesitated. Churchill and Joseph Stalin, who worked with Marshall and valued his experience, suggested naming him to the job. Although Marshall wanted the high-profile position, Roll finds he refused to put himself forward.  Roosevelt wavered, at first telling aides that we would name Marshall because “he is entitled to establish his place in history as a great general.”

In the end, he chose Dwight Eisenhower, who had led the led the successful invasion of North Africa. Roosevelt explained his final decision by saying he couldn’t sleep at night if Marshall was not in Washington.  Marshall was deeply disappointed but never complained and immediately gave his full support to Eisenhower, a man whom he had earlier promoted from a low-level job.

After the Allied victory over Germany, American troops were rapidly withdrawn from Europe. In 1946-7, as Stalin tightened his grip on his eastern European conquests, the western European nations, still suffering from wartime destruction, experienced high unemployment and food shortages. Marshall, now serving as President Truman’s Secretary of State, realized that the U.S. would have to launch a massive aid program for them to resist Communism.

He asked key aides, including Charles Bohlen and George Kennan, to draft a plan for him to present to Truman and the Congress. He outlined the plan in a famous speech delivered at Harvard on June 5, 1947. It was immediately supported by leaders in Great Britain and France. Aides to President Harry Truman, recognizing its potential political dividends, wanted to label it the Truman Plan. However, Truman wisely noted that both houses of Congress were controlled by Republicans; if any major spending proposal named after him was sent up, it would soon die.

He told his political advisor Clark Clifford, “I’ve decided to give the whole thing to General Marshall.”

Truman said that if it was named the Marshall Plan, even “the worst” Republicans in Congress would have to vote for it.

Although Marshall is today remembered across the globe for his leadership and self-sacrifice, Roll notes that in 1950-51, when he served as Secretary of Defense, his reputation came under serious attack by Senator Joseph McCarthy. The Wisconsin Republican accused him of being part of a “great conspiracy” which was responsible for the victory of Communists in China. He also claimed Marshall was a defeatist who could have quickly ended the Korean War, but instead managed an unnecessary “slaughter” of American boys.

The harassment by McCarthy and others on the Republican far right convinced Marshall that after a lifetime of service, it was time to retire. He resigned from Truman’s cabinet in 1951, aged 71.  He then lived a quiet life on his rural Virginia estate, riding horses and gardening. He died in 1959 after series of debilitating strokes.

Roll concludes his biography by quoting a proverb, “if you want to test a man’s character, give him power.”

With that as a yardstick, we can see how Marshall’s honesty and modesty were a key to his success, and how our current national leadership is so sorely lacking in those essential qualities.