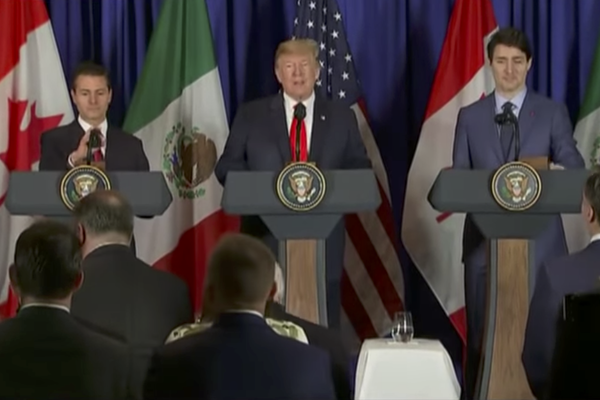 The leaders of the three countries in NAFTA: Mexico, the United States, and Canada.

In recent years, internationalism―cooperation among nations for promotion of the common good―has acquired a bad reputation.

Of course, internationalism has long been anathema to the political Right, where a primitive tribalism and its successor, nationalism, have flourished for many years. Focusing on their nation’s supposed superiority to others, a long line of rightwing demagogues, including Adolf Hitler (“Deutschland Über Alles”) and Donald Trump (“America First”), have stirred up xenophobia, racism, and militarism, often with some success in public opinion and at the polls.  Numerous nationalist imitators have either secured public office or are hungering for it in many parts of the world.

But what is new in recent years is the critique of internationalism on the political Left. For centuries, internationalism was a staple of the progressive, avant garde outlook.  Enlightenment thinkers promoted ideas of cosmopolitanism and the unity of humanity, critics of war and imperialism championed the development of international law, and socialists campaigned for replacing chauvinism with international working class solidarity.  In the aftermath of two devastating world wars, liberal reformers roundly condemned the narrow nationalist policies of the past and placed their hopes for a peaceful and humane future in two world organizations: the League of Nations and the United Nations.

A key reason for the decline of support for this internationalist vision on the political Left is the belief that internationalism has served as a cloak for great power militarism and imperialism.  In fact, there is some justification for this belief, as the U.S. government, while professing support for “democracy” and other noble aims, has all too often used its immense military, economic, and political power in world affairs with less laudatory motives, especially economic gain and control of foreign lands.

And much the same can be said about other powerful nations.  In their global operations during much of the twentieth century, were the British and French really concerned about advancing human rights and “civilization,” the Germans about spreading “kultur,” and the Russians about liberating the working class?  Or were they merely continuing the pattern―though not the rhetoric―of their nationalist predecessors?

To continue this subterfuge, starting in 1945 they all publicly pledged to follow the guidelines of a different kind of global approach, cooperative internationalism, as championed by the United Nations.  But, when it came to the crunch, they proved more interested in advancing their economies and political holdings than in developing international law and a cooperative world order.  As a result, while pretending to honor the lofty aims of the United Nations, they provided it with very limited power and resources.  In this fashion, they not only used the United Nations as a fig leaf behind which their overseas military intervention and imperialism continued, but ended up convincing many people, all across the political spectrum, that the United Nations was ineffectual and, more broadly, that cooperative internationalism didn’t work.

But, of course, cooperative internationalism could work, if the governments of the major powers―and, at the grassroots level, their populations―demanded it.  A fully empowered United Nations could prevent international aggression, as well as enforce disarmament agreements and sharp cutbacks in the outrageous level of world military spending.  It could also address the climate catastrophe, the refugee crisis, the destructive policies of multinational corporations, and worldwide violations of human rights.  Does anyone, aside from the most zealous nationalist, really believe that these problems can be solved by any individual nation or even by a small group of nations?

Fortunately, there are organizations that recognize that, in dealing with these and other global problems, the world need not be limited to a choice between overheated nationalism and hypocritical internationalism.  In the United States, these include the United Nations Association (which works to strengthen that global organization so that it can do the job for which it was created) and Citizens for Global Solutions (which champions the transformation of the United Nations into a democratic federation of nations). Numerous small countries, religions, and humanitarian organizations also promote the development of a more cooperative international order.

If the people of the world are to stave off the global catastrophes that now loom before them, they are going to have to break loose from the limitations of their nations’ traditional policies in world affairs.  Above all, they need to cast off their lingering tribalism, recognize their common humanity, and begin working for the good of all.