A Nation Headed to Civil War: The Compromise of 1850

Sidney Blumenthal is the acclaimed author of A Self-Made Man, Wrestling with His Angel, and All the Powers of the Earth, the first three volumes in his five-volume biography, The Political Life of Abraham Lincoln. He is the former assistant and senior adviser to President Bill Clinton and senior adviser to Hillary Clinton. He has been a national staff reporter for The Washington Post and Washington editor and writer for The New Yorker. His books include the bestselling The Clinton Wars, The Rise of the Counter-Establishment, and The Permanent Campaign. Born and raised in Illinois, he lives in Washington, DC. 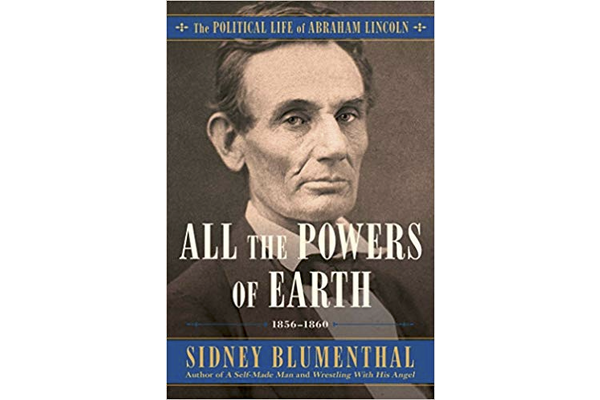 In 1850, the Union was proclaimed to have been saved again in a great compromise that removed slavery as a controversy from national politics. President Millard Fillmore declared it nothing less than “the final settlement.” The issue tearing the country apart, whether the vast territory conquered in the Mexican War would be slave or free, was no longer to be a matter of debate. “We have been carried in safety through a perilous crisis,” Franklin Pierce announced at his inauguration on March 4, 1853.

The Compromise of 1850 admitted Texas as a slave state and California a free one, and avoided determining the status of New Mexico until far into the future. Only a few agitators trying to shield fugitive slaves from being returned to their masters under the new federal law continued to be nuisances. Slavery as a question that would divide the country was now safely consigned to the past as it had once before.

Most importantly, this new compromise left sacrosanct the Compromise of 1820, the Missouri Compromise, the original “final settlement.” The Missouri crisis had aroused all the issues and arguments revived in the crisis in the aftermath of the Mexican War. The admission of Missouri as a state would increase the proslavery bloc in the Senate to a four-seat majority. Its admittance would also establish a precedent for admitting further Western states as slave states. The Northern objection was mirrored in Southern fears that the entire West would be denied to slavery and the balance of power inevitably shifted. Secretary of State John Quincy Adams wrote in his diary that the Missouri problem was “a flaming sword . . . a mere preamble—a title page to a great tragic volume.” He believed it was based in the Constitution’s “dishonorable compromise with slavery,” a “bargain between freedom and slavery” that was “morally vicious, inconsistent with the principles upon which alone our revolution can be justified.” He prophesied that “the seeds of the Declaration are yet maturing” and that its promise of equality would become “the precipice into which the slave-holding planters of his country sooner or later much fall.” In the Senate, the Southerners’ anxiety that slavery might be prohibited in the territories assumed a hostility congealed into ideology against the egalitarian premise of the Declaration of Independence. Senator Nathaniel Macon of North Carolina, the former Speaker of the House, posed the question, “A clause in the Declaration of Independence has been read declaring that ‘all men are created equal’; follow that sentiment and does it not lead to universal emancipation?” The Declaration, Macon stated, “is not part of the Constitution or of any other book” and there was “no place for the free blacks in the United States.” Senator Henry Clay of Kentucky managed to hammer together a narrow majority for a compromise that brought in Maine as a free state to balance the slave state of Missouri and established a line restricting slavery north of 36°31’ latitude excepting Missouri. The debate inspired a sense of panic in Thomas Jefferson retired at Monticello. “This momentous question, like a fire bell in the night, awakened and filled me with terror. I considered it at once as the knell of the Union.”

Jefferson’s nightmare hung over the Senate debate of the Compromise of 1850, filled with frightful images of death, premonitions of catastrophe, and curses of doom if slavery were allowed to persist as a vital issue. The Great Triumvirate of Henry Clay, Daniel Webster, and John C. Calhoun, the representative political men of their age, hurled lightning bolts from their Olympian heights. Henry Clay, young Abraham Lincoln’s “beau ideal of a statesman,” who invented the power of the Speaker of the House, who as a senator crafted the Compromise of 1820, who served as secretary of state, and who was nearly elected president, warned that the nation stood “at the edge of the precipice before the fearful and leap is taken in the yawning abyss below, which will inevitably lead to certain and irretrievable destruction.” Daniel Webster of Massachusetts, the Godlike Daniel, the voice of “liberty and Union, one and inseparable, now and forever,” whose framed picture hung in Lincoln’s law office, cautioned, “Secession! Peaceable secession! Sir, your eyes and mine are never destined to see that miracle. The dismemberment of this vast country without convulsion! . . . Sir, he who sees these States, now revolving in harmony around a common center, can expect to see them quit their places and fly off without convulsion, may look the next hour to see the heavenly bodies rush from their spheres and jostle against each other in the realms of space without producing a crash of the universe.” John C. Calhoun of South Carolina, whose stunning career included every office—congressman, senator, secretary of war, vice president, secretary of state—but the one he coveted most—president of the United States—sat wrapped wraithlike in a black cape on the Senate floor. The great nullifier, who insisted the states had preeminent authority over the federal government, objected to any compromise that would thwart the extension of slavery anywhere in the country, an “injustice” which he called the “oppression” of the South. “No, sir,” he prophesied, “the Union can be broken.” Calhoun’s acolyte, Jefferson Davis of Mississippi, in opposing the admission of California as a free state, threatened, “If sir, this spirit of sectional aggrandizement, or if gentlemen prefer, this love they bear for the African race, shall cause the disruption of these states, the last chapter of our history will be a sad commentary upon the justice and the wisdom of our people.” Calhoun died less than a month after his final appearance in the Senate. Clay and Webster were dead within two years. The old order passed. By then Secretary of War Jefferson Davis was the power behind the president.

Excerpt from ALL THE POWERS OF EARTH by Sidney Blumenthal

To hear Sidney Blumenthal discuss his work on his five-part biography of Abraham Lincoln and more, watch his interiew with HNN editor Kyla Sommers.