Sparta and the Collapse of Greece

Jennifer Roberts received her BA and PhD from Yale University.  She has published widely in the field of Greek civilization and since 1992 has taught Greek and Latin and Ancient History at the City College of New York and the City University of New York Graduate Center.  She is the author of The Plague of War:  Athens, Sparta, and the Struggle for Ancient Greece, recently released in paper by Oxford University Press, and she is currently working on a book on Greek intellectual history. 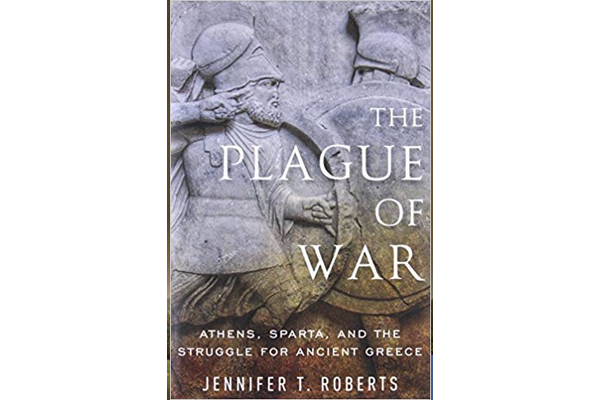 Of the two most powerful states in classical Greece, Athens was a forward-looking democracy with a far-flung naval empire, Sparta a land-locked mixed government heading a league of nearby states.  In 431 BC, the long-simmering rivalry between them erupted into open warfare.  The protracted war that followed consumed the entire Greek world.  That war—known as the Peloponnesian War, or the Atheno-Peloponnesian War, because of Sparta’s power base in the peninsula of the Peloponnesus—is commonly believed to have ended in 404 BC with the surrender of Athens. In my book The Plague of War:  Athens, Sparta, and the Struggle for Ancient Greece, I argue that the war did not truly end until 371 BC, when the crack infantry of its erstwhile ally Thebes shattered Sparta’s military supremacy at Leuctra. Grave as its consequences were,  the Peloponnesian War did not sap the strength of the Greeks and thus lead in a direct line to its ultimate defeat at the hands of Philip of Macedon, father of Alexander the Great.  Rather, the explanation lies in the subsequent conduct of the Spartans, whose pigheaded aggression against their own allies throughout the decades after their victory over Athens weakened Greece immensely.

Neither the course nor the conclusion of the Peloponnesian War was foreseeable at its outset.  Strong in infantry, the Spartans neglected to build a navy until almost twenty years into the war; the Athenians dramatically weakened their imperial fleet by becoming involved in an internal dispute in Sicily. The fortunes of war swung dizzily back in forth for decades until, bolstered by financing from Persia, the Spartans under their charismatic admiral Lysander defeated the Athenians at the Battle of Aegospotami in what is now northern Turkey and captured all but a handful of their 180 ships.  The next year the Athenians surrendered.

The war had done immense damage to Athens.  It had lost its fleet and its empire its land  had been ravaged, its economy badly disrupted.  The Spartans’ success in the war seemed to leave them holding all the cards, as the opportunity to unite Greece in an expanded Peloponnesian League now lay ready to hand.  Their skills, however, lay not in diplomacy but in fighting; they had planted the seeds of future trouble in signing a peace with the Athenians that did not take into consideration the wishes of their important allies Corinthand Thebes.  So overbearing were they, indeed, that to their old enemies the Athenians they soon added new ones:  their own former allies—and Persia.

Free of their war with the Athenians, in 401 the Spartans moved at last against their nearby ally Elis in the western Peloponnesus; they had been nursing a grudge against the Eleians for nearly twenty years after a conflict over access to the Olympic Games in their territory.  Attempting to expand Spartan influence in the east, Sparta’s new king Agesilaus soon alienated Persia, and the Athenian admiral Conon, one of the few who had escaped the carnage at Aegospotami, soon joined the Persians in defeating the Spartans soundly in a naval battle at Cnidus off the southwest coast of Turkey. This victory undid many of the gains the Spartans had won a decade before at Aegospotami.

Meanwhile back in the Greek mainland Agesilaus’ meddling in the internal affairs of Sparta’s key ally Thebes angered not only the Thebans but other Greeks as well. Encouraged by an infusion of Persian gold, a new alliance of Thebes, Corinth, Athens and Sparta’s old rival Argos went to war with Sparta in 395.  Although Sparta was victorious, the Spartans proved better at winning wars than winning the peace.  The treaty that ended the war, dictated by the Persian king, stipulated that all the Greek cities of Asia Minor were to belong to him but that all other Greek state were to remain autonomous. Having made up his quarrel with the Spartans, the King appointed them the guarantors of the peace.   Agesilaus made the enforcement of the autonomy clause his personal crusade and promptly went about dissolving any promising union of Greek states in the name of “autonomy.”  He also scandalized his fellow Greeks by winking at the seizure of the Thebans’ citadel by one of his generals, an outrage that could in no way be rationalized as a defense of autonomy, as well as at a similar attempt against the Athenians by another Spartan commander.

Together Thebes and Athens fought Sparta on and off throughout the 370s, but it was the Thebans who finally dealt their former ally a death blow at Leuctra in 371.  Only then did the Peloponnesian War finally end. Defecting to Sparta after his recall from Sicily, the Athenian Alcibiades has suggested to the Spartans that when they proved victorious over Athens they would enjoy a hegemony over Greece grounded not in force but in goodwill.  But events proved that the Spartans preferred to be feared than loved. This fatal preference would dictate their actions in the decades after Aegospotami, and in the end their downfall was brought about not by the old enemy they had fought for so long but a new one created by their shortsighted foreign policy.