The Long History of Unjust and Lawless Attorneys General 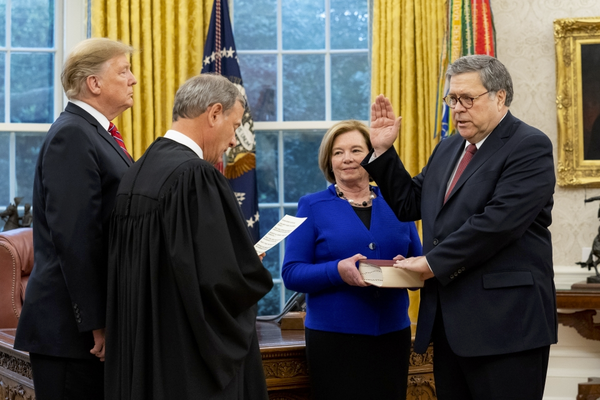 As Robert Mueller testifies this week before Congress, the United States Department of Justice is once again in the spotlight. Earlier this summer, the House of Representatives held Attorney General William Barr in contempt for his refusal to comply with a subpoena on the 2020 census. Barr is hardly the first AG who has used his appointment as Attorney General to promote lawlessness and injustice.

In fact, in the past 100 years, Attorneys General have violated the Bill of Rights; engaged in political corruption and lawless acts while advocating "law and order"; endorsed abuses of power in the name of "national security”; and refused to cooperate with Congressional investigations of wrong doing. The list of controversial Attorneys General who have undermined their oath to uphold the Constitution of the United States is long and includes eight individuals who served from the time of the presidency of Woodrow Wilson to the presidency of Donald Trump.

The first is A. Mitchell Palmer, who served as Attorney General under Woodrow Wilson from March 1919 to March 1921. For much of the period from October 1919 to March 1921, Wilson was incapacitated by a stroke, giving Palmer license to abuse his position.  Palmer initiated the  “Palmer Raids”, also known as the “Red Scare”, in which thousands of people suspected to be Socialists or Communists were rounded up and jailed. The prisoners were often denied their basic civil rights and writ of habeus corpus and detained for months before they were finally released. A small percentage who were not American citizens were deported.  Assisting Palmer in his quest to “save the nation” from the Soviet Union’s new leader Nikolai Lenin was future FBI Director J. Edgar Hoover and  other zealots who had no issue with violations of the Bill of Rights. Palmer undermined respect for the rule of law as he denied basic civil liberties and civil rights to thousands of victims of his “Red Scare”.

Palmer’s successor, Harry M. Daugherty, was the Attorney General under President Warren G. Harding and briefly under President Calvin Coolidge from March 1921 to April 1924.  Prior to his appointment, Daugherty was Harding’s campaign manager and part of the infamously corrupt  “Ohio Gang.” Two members of the cabinet under Harding and Coolidge---Secretary of State Charles Evans Hughes and Secretary of Commerce Herbert Hoover—were wary of Daugherty, and eventually Coolidge asked for his resignation after evidence emerged that Daugherty had knowledge of the infamous Teapot Dome scandal (oil lands in Wyoming were given to the Sinclair Oil Company illegally by Secretary of the Interior Albert Fall). Hints of the Teapot Dome and other scandals began to emerge in the last days of Harding’s presidency before his sudden death in August 1923.  Daugherty was indicted in 1926 and tried twice but deadlock in the Justice Department led to the dismissal of charges. Nevertheless, Daugherty was left under a cloud of corruption which undermined the historical reputation of President Harding.

Four decades later, President Richard Nixon appointed his campaign manager, John N. Mitchell as Attorney General, a position he held from January 1969 to March 1972.  Mitchell was regarded as one of the closest advisers to Nixon and was infamous, like his president, for his support of “law and order.” Ironically, Mitchell didn’t always follow the letter of the law. He was not vetted by FBI Director J. Edgar Hoover (President Nixon requested he not be), advocated the use of wiretaps in national security cases without obtaining a court order, promoted preventive detention of criminal suspects although it potentially violated the Constitution, and did not properly enforce court-ordered mandates for desegregation. Most famously, the Watergate tapes proved he helped plan the break-in at the Democratic National committee headquarters and was deeply involved in the cover-up that followed. Even after he left the Justice Department and became the head of the Committee to Reelect the President, he threatened Watergate journalist Carl Bernstein and Washington Post publisher Katherine Graham. Mitchell was indicted and convicted of conspiracy, obstruction of justice, and perjury. He spent 19 months in prison and lost his law license for his illegal and unethical actions.

Nearly two decades later, President George H. W. Bush appointed William Barr as Attorney General and Barr served from November 1991 to January 1993. In his first round as head of the Justice Department, Barr faced criticism after he encouraged the President to pardon former Secretary of Defense Caspar Weinberger, who served under President Ronald Reagan from January 1981 to November 1987. In the aftermath of the Iran Contra Affair, Weinberger faced indictment and trial on charges of perjury and obstruction of justice.

After the Presidential Election of 2000, President George W. Bush selected former Senator John Ashcroft of Missouri as his first Attorney General, serving from February 2001 to February 2005.  Ashcroft endorsed the use of torture, including in the Abu Ghraib abuse scandal in Iraq in 2004. Further, he endorsed unregulated surveillance by the Foreign Intelligence Surveillance Court as well as FBI surveillance of libraries and retail sales to track suspects’s reading habits. Critics of the Patriot Act and the post-September 11th policies of the Bush Administration argue this was a massive privacy violation.  With his reputation undermined, Ashcroft decided to leave his position after Bush won a second term in 2004.

Ashcroft was replaced by Alberto Gonzales, who served from February 2005 to September 2007. Previously, Gonzales was a member of the White House Counsel from January 2001 to February 2005 and  was Bush’s General Counsel during his Texas Governorship from 1995-2001.  Gonzales’s tenure as Attorney General was highly controversial as he endorsed warrantless surveillance of US citizens and gave legal authorization to “enhanced interrogation techniques,” later, generally acknowledged as torture.  He also presided over the firing of nine US Attorneys who refused to adhere to back-channel White House directives to prosecute political enemies.  Further, he authorized the use of military tribunals and the denial of the writ of habeus corpus to detainees at the Guantanamo Bay Naval Base in Cuba.  Eventually, he resigned while under fire for abusing his office and his politicizing it.

Corruption and abuse by the Attorney General have continued under President Donald Trump with Jeff Sessions; then with Matthew Whitaker as his replacement as Acting Attorney General, and finally with recent return of William Barr to the office.

Sessions, who had been an Alabama Republican Senator since 1997, almost immediately sparked controversy after news broke that he misled the Senate on his contacts with Russian officials during the 2016 Presidential campaign. Sessions therefore recused himself from the investigation into Russian collusion during the campaign. Trump was immediately displeased and pressure slowly mounted from within the administration for Sessions to resign.

But when Sessions left the administration in fall 2018, Acting Attorney General Matthew Whitaker, who served from November 2018 to February 2019, circumvented normal Senate confirmation procedure which subsequently caused an uproar. This led to numerous legal challenges to his claim that he could supervise the Mueller investigation.

The brief and controversial tenure of Whitaker ended in February 2019, with the appointment of William Barr. A quarter century after he served as AG under George H.W. Bush, Barr was the AG  for the second time. Today, Barris even more controversial as he has enunciated his vision of unitary executive authority, adding to Donald Trump’s belief that his powers as President are unlimited.  Barr has refused to hand over the entire Mueller Report to committees in the House of Representatives,  has refused to testify before the House Judiciary Committee, and was recently held in criminal contempt for refusing to share information about Trump Administration attempts to add a citizenship question to the upcoming 2020 Census.

So the Justice Department and the Attorneys General over the past century under Republicans Warren G. Harding, Richard Nixon, George H. W. Bush, George W. Bush and Donald Trump has undermined public faith and its reputation as a fair minded cabinet office intent on enforcing fair, just policies.  However, the past century began with a horrible tenure under Democrat Woodrow Wilson at his time of incapacity, allowing A. Mitchell Palmer to set a terrible standard followed by seven of his successors in the Justice Department. Regaining confidence in the agency and the holder of the office of Attorney General will require a change in the Presidency, clear and simple.