Reprinted from The Hidden History of Guns and the Second Amendment with the permission of Berrett-Koehler Publishers. Copyright © 2019 by Thom Hartmann. 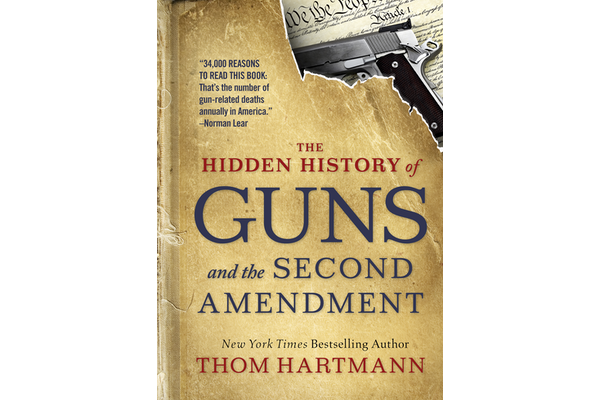 At bottom, the Court’s opinion is thus a rejection of the common sense of the American people, who have recognized a need to prevent corporations from undermining self-government since the founding , and who have fought against the distinctive corrupting potential of corporate electioneering since the days of Theodore Roosevelt. It is a strange time to repudiate that common sense. While American democracy is imperfect, few outside the majority of this court would have thought its flaws included a dearth of corporate money in politics.

Parkland shooting survivor and activist David Hogg once asked, when Sen. John McCain, R-Ariz., was still alive, why McCain had taken more than $7 million from the NRA (not to mention other millions that they and other “gun rights” groups spent supporting him indirectly).

McCain’s answer, no doubt, would be the standard politician-speak these days: “They support me because they like my positions; I don’t change my positions just to get their money.” It’s essentially what Sen. Marco Rubio, R-Fla., told the Parkland kids when he was confronted with a similar question.

And it’s a nonsense answer, as everybody knows.

America has had an on-again, off-again relationship with political corruption that goes all the way back to the early years of this republic. Perhaps the highest level of corruption, outside of today, happened in the late 1800s, the tail end of the Gilded Age. (“Gilded,” of course, refers to “gold coated or gold colored,” an era that Donald Trump has tried so hard to bring back that he even replaced the curtains in the Oval Office with gold ones.)

One of the iconic stories from that era was that of William Clark, who died in 1925 with a net worth in excess, in today’s money, of $4 billion. He was one of the richest men of his day, perhaps second only to John D. Rockefeller. And in 1899, Clark’s story helped propel an era of political cleanup that reached its zenith with the presidency of progressive Republicans (that species no longer exists) Teddy Roosevelt and William Howard Taft.

Clark’s scandal even led to the passage of the 17th Amendment, which let the people of the various states decide who would be their U.S. senators, instead of the state legislatures deciding, which was the case from 1789 until 1913, when that amendment was ratified.

By 1899, Clark owned pretty much every legislator of any consequence in Montana, as well as all but one newspaper in the state. Controlling both the news and the politicians, he figured they’d easily elect him to be the next U.S. senator from Montana. Congress later learned that he not only owned the legislators but in all probability stood outside the statehouse with a pocket full of $1,000 bills (literally: they weren’t taken out of circulation until 1969 by Richard Nixon), each in a plain white envelope to hand out to every member who’d voted for him.

When word reached Washington, DC, about the envelopes and the cash, the US Senate began an investigation into Clark, who told friends and aides, “I never bought a man who wasn’t for sale.”

Mark Twain wrote of Clark, “He is as rotten a human being as can be found anywhere under the flag; he is a shame to the American nation, and no one has helped to send him to the Senate who did not know that his proper place was the penitentiary, with a chain and ball on his legs.”

State Senator Fred Whiteside, who owned the only non-Clark-owned newspaper in the state, the Kalispell Bee, led the big exposé of Clark’s bribery. The rest of the Montana senators, however, ignored Whiteside and took Clark’s money.

The US Senate launched an investigation in 1899 and, sure enough, found out about the envelopes and numerous other bribes and emoluments offered to state legislators, and refused to seat him. The next year, Montana’s corrupt governor appointed Clark to the Senate, and he served a full eight-year term.

Clark’s story went national and became a rallying cry for clean-government advocates. In 1912, President Taft, after doubling the number of corporations being broken up by the Sherman Anti-Trust Act over what Roosevelt had done, championed the 17th Amendment (direct election of senators, something some Republicans today want to repeal) to prevent the kind of corruption that Clark represented from happening again.

Meanwhile, in Montana, while the state legislature was fighting reforms, the citizens put a measure on the state ballot of 1912 that would outlaw corporations from giving any money of any sort to politicians. That same year, Texas and other states passed similar legislation (the corrupt speaker of the House Tom DeLay, R-Texas, was prosecuted under that law).

Montana’s anticorruption law, along with those of numerous other states, persisted until 2010,when Justice Anthony Kennedy, writing for the five-vote majority on the U.S. Supreme Court, declared in the Citizens United decision that in examining more than 100,000 pages of legal opinions, he could not find “. . . any direct examples of votes being exchanged for . . . expenditures. This confirms Buckley’s reasoning that independent expenditures do not lead to, or create the appearance of, quid pro quo corruption [Buckley is the 1976 decision that money equals free speech]. In fact, there is only scant evidence that independent expenditures even ingratiate. Ingratiation and access, in any event, are not corruption.”

The US Supreme Court, following on the 1976 Buckley case that grew straight out of the Powell Memo and was written in part by Justice Lewis Powell, turned the definitions of corruption upside down.

That same year, the Court overturned the Montana law in the 2010 American Tradition Partnership, Inc. v. Bullock ruling, essentially saying that money doesn’t corrupt politicians, particularly if that money comes from corporations that can “inform” us about current issues (the basis of the Citizens United decision) or billionaires (who, apparently the right-wingers on the Court believe, obviously know what’s best for the rest of us).

Thus, the reason the NRA can buy and own senators like McCain and Rubio (and Thom Tillis, R-N.C./$4 million; Cory Gardner, R-Colo./$3.8 million; Joni Ernst, R-Iowa/$3 million; and Rob Portman, R-Ohio/$3 million, who all presumably took money much faster and much more recently than even McCain) is because the Supreme Court has repeatedly said that corporate and billionaire money never corrupts politicians. (The dissent in the Citizens United case is a must- read: it’s truly mind-boggling and demonstrates beyond refutation how corrupted the right-wingers on the Court, particularly Scalia and Thomas—who regularly attended events put on by the Kochs—were by billionaire and corporate money.)

So here America stands. The Supreme Court has ruled, essentially, that the NRA can own all the politicians they want and can dump unlimited amounts of poison into this nation’s political bloodstream.

Meanwhile, angry white men who want to commit mass murder are free to buy and carry all the weaponry they can afford.