Robyn Arianrhod is Adjunct Research Fellow at the School of Mathematical Sciences at Monash University. Her previous works include Seduced by Logic and Einstein's Heroes. 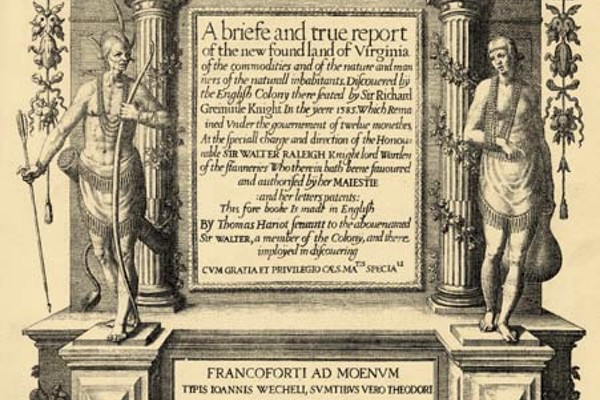 Thomas Harriot was the English contemporary and peer of Galileo Galilei and Johannes Kepler, although he’s unknown to most people. That’s because his busy and dramatic life meant that he never got around to publishing his mathematical and scientific work, which is a pity for history: his manuscripts show that he was one of the most brilliant forerunners of modern science and mathematics. In this UN International Year of Indigenous Languages, however, it is especially significant that he was also a pioneering linguist and ethnographer.

He worked for Sir Walter Ralegh as an astronomer and navigational theorist – his first job was to train Ralegh’s sea captains and pilots so that they could make their way safely across the uncharted Atlantic to America. Then, in 1585-86, he spent a year in “Virginia” (today’s North Carolina), with Ralegh’s First Colony on Roanoke Island.

His job in America included a remarkable innovation by Ralegh: that of a kind of diplomat. Harriot had already learned some of the local language – North Carolina Algonquian dialects – from two indigenous men, Manteo and Wanchese. They had spent six months living in Ralegh’s home after sailing to England with his initial reconnaissance fleet in late 1584. Harriot lived in Ralegh’s mansion, too, and had plenty of opportunity to exchange language lessons with the two Americans, who returned home with the First Colony fleet.

Fortunately, Harriot had the right temperament for his diplomatic role – he was open, curious, and notably non-judgmental. He made friends with the people, and clearly enjoyed much about their way of life. We know this because he left a remarkable record, A brief and true report of the new found land of Virginia. It was the only work he published.

Although Ralegh had commissioned this report in order to show the commercial benefits of a trading colony in America, Harriot’s personal empathy and interest in the people and their way of life shines through. He doesn’t just offer a detached list of plants, foods, and so on; he describes the way the people went about their agriculture, hunting, and fishing, noting their abundant crops and their clever ways of building fishing weirs. Their staple crop, corn – called pagatowr in their language – yielded “a very white and sweet flour [that] makes a very good bread”. The people also roasted or boiled the corn for use in stews, for which purpose they used earthenware pots. Harriot commented, “Their women know how to make [these] vessels […] so large and fine that our potters with their wheels can make no better.”

He listed many other native foods, giving details of the way they were cooked and how they tasted. He was quite at home with their Algonquian names, which he didn’t obliterate by using Anglicized terms instead. And he was impressed that amid all this abundant food the people ate moderately, while at the same time “making good cheer together”.

It’s these kinds of little details of daily life – of shared meals, festivals, making of canoes and pots, planting and hunting – that bring to life a thriving, fascinating, and relatively harmonious community. So much so that when A brief and true report was published in a deluxe illustrated edition in 1590, it became a best-seller, published in four languages. It’s a landmark in American ethnology – a remarkable record of a remarkable way of life, in which Harriot’s report is accompanied by his captions to engravings of John White’s illustrations. Harriot and White had worked together in America: White sketched the people as they went about their daily lives, while Harriot’s knowledge of the language enabled him to converse with the people themselves. 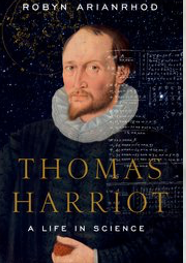 He had a gift for languages, both verbal and mathematical. He later acted as a Greek language consultant to his friend George Chapman while Chapman was making the first English translation of Homer’s Iliad, and he produced the first fully symbolic algebra. But the exotic Algonquian language opened up a whole new world of sounds and expressions.

Harriot was so inspired by these new sounds that he created the world’s first complete phonetic alphabet. Four centuries before today’s global telecommunications revolution, he envisaged a different kind of globalism: the sharing of languages via a phonetic system designed to represent all the possible sounds of human speech. To make his system truly universal, he expressed it in unique trans-cultural symbols.

Once again, he didn’t publish his discovery, and the manuscript of his alphabet was lost for many centuries. Fortunately, he’d used Latin letters to represent Algonquian words in his report on Virginia, which includes one of the earliest written records of indigenous North American words.

Neither Harriot nor Ralegh foresaw the disastrous consequences that followed their initial attempts to found a trading base in America – the diseases, the greed, the racism and rapaciousness of many English setters and administrators. It is a tragic, heartbreaking story that began to unfold even in the First Colony. The way of life brought so vividly to light in the illustrated Brief and true report no longer exists, and the particular North Carolina dialects that Harriot knew have not survived.

In 2014, however, historian Scott Dawson turned to Harriot’s work (and that of John Lawson a century later) when he wrote a paper, “The Vocabulary of Croatoan Algonquian”, which was published in the Southern Quarterly. Dawson is a descendant of the Croatoan people of Hatteras Island, which was also Manteo’s homeland – it is not far from Roanoke Island, and it is the last known destination of the famous Lost Colony, which vanished in the year or so after its establishment in 1587. Dawson noted that “a substantial portion” of what we know today about the Croatoan communities and their language comes from Harriot.

Dawson’s paper includes a list of 120 Croatoan words and phrases, which, together with Harriot’s notes and White’s illustrations, offer a precious link to his people’s past. It’s something to celebrate, although this Year of Indigenous Languages also reminds us of how much was needlessly lost.