The Remarkable History of the Union League Club

MICHAEL HOGAN is a historian and the author of 24 books including Abraham Lincoln and Mexico. His most recent work, Guns, Grit and Glory: How the US and Mexico Came Together to Defeat the French Empire in the Americas, will be published by Trinity University Press in the fall. His website is www.drmichaelhogan.com. 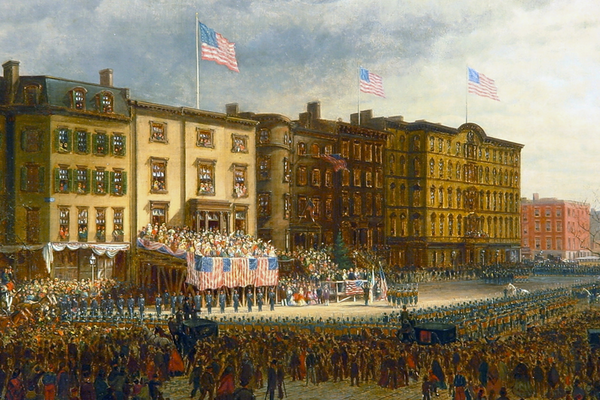 Today, as we observe the dismay of Princeton students at their university’s legacy of slavery, and the Trump administration’s increasingly hostile attitude toward Mexico, it is important to recognize that there were moments in our history where both African-American freedom and Mexico’s independence were addressed in a positive way. Careful readers of history are familiar with Henry David Thoreau coupling the two issues in his essay Civil Disobedience, “This country must cease to hold slaves and wage war on Mexico.” But few remember the pivotal role played by a small social club in New York City at a pivotal moment in US history.

The modest building on the corner of Park Avenue and 37th Street with the red brick and limestone façade houses an impressive library, dining and meeting rooms, a traditional bar, and a wide array of art and collectables. For many years, it was considered a gentlemen’s club with a unique group of movers and shakers in the city of New York, but women have been part of the scene since the Sixties. It is still exclusive, however, by member nomination and invitation only.

Founded in 1863 at the height of the Confederate advances against the North, its purpose was to unite a group of influential leaders in the community in support of President Lincoln and the Union. It consisted of businessmen, newspaper editors, brokers, and professionals who were committed “to resist to the uttermost every attempt against the territorial integrity of the Nation.”

Frederick Law Olmsted, the architect who designed Central Park in New York and Golden Gate Park in San Francisco, was one of the founders. Some of the early members included J.P. Morgan, William Cullen Bryant, and Ulysses S. Grant. In addition to believing that a strong federal government was a necessity for a prosperous nation, they were abolitionists and felt that slavery could no longer be tolerated in America.

The club could not have been formed at a more critical time. A month before its founding, Lincoln had signed the Emancipation Proclamation and there was a widespread belief among immigrant workers that the newly-freed slaves would take away their jobs. Five months later, the infamous Draft Riots broke out in New York City and among the targets of the vandals were the Colored Children’s Orphanage and the newly-founded Union League Club.

The club members were steadfast, however. Undismayed by the attacks, they ran off the rioters, then got together to organize and fund a regiment of US Colored Troops. The  regiment joined the many white regiments that New York had already enlisted in the Union cause. These new soldiers would be professionally trained in tactics, weaponry, and marksmanship on Rikers Island.

By February of 1864, the fully equipped and trained 20th regiment of the US Colored Troops marched south. Composed of free blacks, they were no rag-tag group of reluctant enlistees. They were a highly-motivated group of volunteers who heeded the call to make the emancipation of their brothers in the South a practical reality. Later, two more regiments were formed, the 26th and the 30th respectively. The regimental steward later became the first black physician in Athens, Ohio. Benjamin Randolph, the first black officer in the regiment, went on to serve with the Freeman’s Bureau and became a state senator.

But the story, as interesting as it is, doesn’t end there. After the Civil War was over, the US was faced with a situation that could no longer be ignored: French and Austrian troops occupied Mexico and an Austrian archduke called himself the Emperor of Mexico.The US had withheld active support for the exiled President of Mexico Benito Juárez during the Civil War for fear France might join the Confederacy and the US would be fighting a war on two fronts.

When the Union Leaguers invited General Jo Hooker, hero of Antietam and Williamsburg, to accept a gold presentation sword in June of 1865, Mexican envoy Matías Romero persuaded him to speak of this crisis to the club. In his acceptance speech, reported in the newspaper of that day, General Hooker assured the members that, while the resources our country would likely deter any incursion on US soil, “we must take care, however, that a continent designed to vindicate the wisdom of republican institutions is not encroached upon.”

Despite the flourishes of 19th century prose, the message was clear to the businessman and potential supporters of the Mexican cause whom Romero hoped to convince. In the days that followed, members of the Union League Club would invest heavily in Mexican bonds and would find other practical ways to help that country rid the Americas of occupying European armies. By 1867, the young Romero would raise over $18 million, the Juárez army would triumph over the French and Austrians, and the Mexican Republic would be restored.