A Bloody Mary Bar and a Barroom Full of Fun 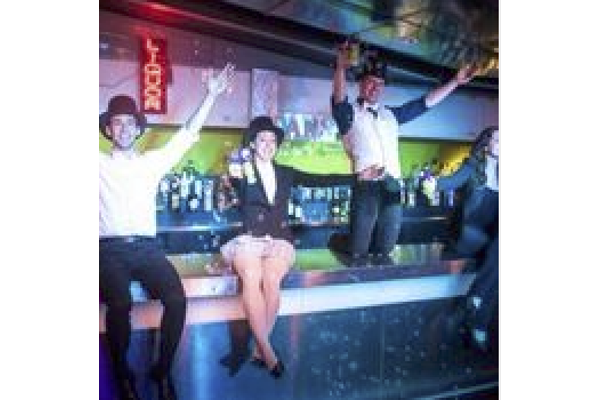 I am a theater critic. In my 45 years of criticism, I have enjoyed the plays if Eugene O’Neill, William Shakespeare and Tennessee Williams, but none of them can match the enjoyment, the sheer fun, that I had last Saturday when I finally caught up with the most hilarious and raucous play in New York, Imbible: Day Drinking, a heady Off Broadway show  about the history of drinking at brunch now celebrating its second anniversary.

The musical, at the New World Stages theater complex at Eighth Avenue and W. 50th Street, New York, is the tuneful history of brunch, a time-honored American dining tradition that isn’t American at all. The story includes the history of the Bloody Mary, Irish Coffee. Champagne and the Bellini, brunch drinks, told in spirited, light hearted songs presented by a seasoned and a deliciously giddy cast -- Bobby Eddy, Nick Barakos, Devon Meddock, Emily Ott, Megan Callahan and Devyn White. They cavort from one end of the barroom to another. They sing, they dance, they tell jokes, they adopt foreign accents, they don one wild costume after another and through it all tell you everything there is to know about the brunch and its drinks, a history that is just fascinating, ice or no ice.

Their story goes all the way back to the ancient Greeks, the Turks of the Ottoman empire. Napoleon Bonaparte, tropical Caribbean islands and every bar in San Francisco (and there a lot of bars in San Francisco).

Imbible: Day Drinking is a serious (well…………..), nicely-structured musical that is organized, runs along in sharp dialogue, witty jokes, marvelous human caricatures and has as many sight gags as a Marx Brothers movie. There is never a moment without a good laugh. It is as much fun as finding the key to a good wine cellar late on a Saturday night.

The play is produced in an actual bar, the Green Room, that services customers at the theater complex on Sundays. It is stocked with every bottle of liquor you could think of, and some you could not think of. The actual bar is the length of the room and faces a room full of several dozen tables. Each patron at the play is entitled to three drinks served in the show and all the pastries you can eat off trays on top of the bar (you’d better rush for these; they go fast).

The purpose of the writer, Anthony Caporale, also the co-director, is to tell the history of brunch and its drinks and he never tries to push the idea of excess drinking (a warning from me – if you must drink, drink moderately). You do not see drunks, men and women passed out or anyone asking for a cold one. It is a straight forward musical written to please, and it certainly does.

The brunch, a time - honored staple of American dining, was invented sometime in the 1890s by British hunters who chased terrified foxes with their hounds across the English countryside all morning. Done, with hours in the saddle behind them, they all sat down for a late breakfast around 10 or 11 a.m. They called it brunch and the name stuck. The brunch was quickly moved to America, where restaurants began to serve it, particularly on Sundays. You, me, everybody, goes to them.

The play starts with the history of the Bloody Mary and then, in chronological order, moves to Irish Coffee, Champagne and the Bellini. The show’s actors explain to you how to make them and invite you to come up to the bar and make your own Bloody Mary.

The actual story begins with a man sound asleep on the bar, wrapped in blankets, who arises at 9 a.m. big smile o his face, ready for his weekly Sunday brunch. The story, with humorous music and lyrics by Josh Ehrlich, flies through the barroom from there, with actors dressed as French Generals, Cave Women, doctors, bartenders and a slinking, seductive woman or two. They pop up and down behind the bar, dance through the audience and jump out from behind pillars, all with a big wink.

Everyone is aghast when an actor says that sparkling wine is the same thing as champagne and you get a very funny lesson on how the French invented Champagne, and Irish coffee, too, on the island of Martinique. The Americans took up coffee drinking after the fabled Boston Tea Party prior to the American revolution and made it famous (today, an actor says with great satisfaction, Americans drink 2.4 billion cups of coffee each day and the rate by New Yorkers is seven times that of the average American. New York is the city that never sleeps? That’s why).

There are some funny stories about the invention of drinks and the show winds up with the story of the Bellini, the smooth, peachy drink, that was invented by the Cipriani family and first served at the famous Harry’s Bar in Venice, Italy.

The show ends with the ensemble singing the delightful Let’s Do Brunch, while everyone hoists their Bellinis high int the air. The play runs in conjunction with the theater groups other story, The Spirited History of Drinking.

You want to have a good time in the theater, learn a lot about the history of brunch and drinking and with a wonderful Irish Coffee, too? This is the place. Raise your glasses high!