Run, Hide, Fight If You Must…Now What?

David Lee McMullen is on the history faculty of the University of North Carolina Charlotte.  He is the author of Strike! The Radical Insurrections of Ellen Dawson. 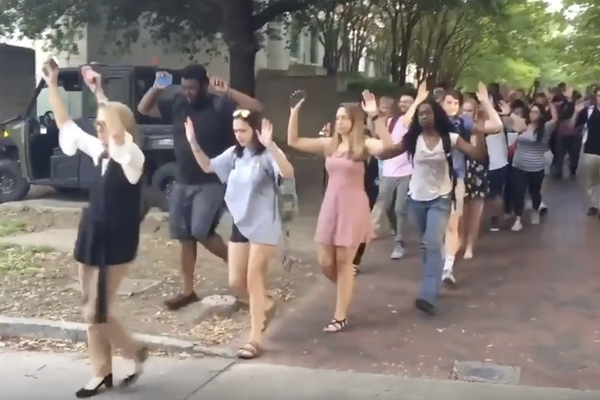 I’m on the faculty of the University of North Carolina Charlotte, a semi-retired historian teaching two courses that meet two days a week. It’s a doable schedule for an old guy.

Tuesday was my last day on campus for the Spring semester and it was supposed to be an uneventful day.  I wrapped-up one class in the morning and gave an exam in another during the late afternoon.  Then I headed home on the light rail.

At home, I made myself a martini and sat down on my balcony to enjoy the evening and anticipate the coming weeks of summer inactivity. That’s when my phone lit up with alerts. Emergency messages from the university told people still on campus to “run, hide and, as a last resort, fight.”

One building away from where I gave that last exam, a student entered a classroom and began shooting.  He killed two and seriously wounded four more.  The unthinkable, the thing that always happens somewhere else, had happened here.

For the next several hours, I sat glued to the television, moving among various internet news sites and double checking Twitter for more information.  Students, faculty and staff still on campus were locked down.  The light rail train, which I had just taken home, was halted several stops away from campus.  My colleagues and students were hiding in darkened rooms, awaiting for the arrival of police to clear the campus, classroom by classroom.  Others were running for safety.

Media pictures depicted where I had walked just a few hours before.  I watched people being marched away from the scene, hands in the air.  Would I see my students?  Would I see my colleagues?

As is common during these horrible events, there were immediate calls for “thoughts and prayers”  but, as a Vietnam Era Marine and a former police officer, I have a very cynical view of such comments.  I understand the destructive power of firearms.

I could not help but remember the people I have known who were victims of violent and senseless crimes such as this.  A former business colleague was killed by the Unabomber.  A high school girlfriend and her family were murdered because they opened the door to a stranger one evening.  Like many Americans, I am sickened by the never-ending slaughter that permeates our society and ask myself why are we unable to stop it.

As the evening wore on, I felt numb, as if the events of the day had not happened, as if they were somewhere far away, not part of my world.

When it was reported that the shooter was a student, a history major, I immediately checked the rolls of my past courses, glad to discover that he had not been in one of my classes.  And, as each victim’s name was released, I checked again.

None of the people directly involved were my students or colleagues, but in a university community of approximately 30,000 the odds were that I wouldn’t know them.  I understood, however, that we had all been touched in some way by this evil deed.

On social media, I began to see comments from colleagues. They expressed the full spectrum of emotion, from deep sadness to intense anger.  As for myself, I was confronted with the reality that, like so many times in the past, nothing will change.  This was not the first university shooting, and it, likely, will not be the last.

Trauma such as this changes the lives of everyone connected, even those of us who watched from a safe distance.  Perhaps, as the number of individuals touched by such violence grows, we will ultimately be able to build the necessary mass to challenge the special interests that fight all attempts at reasonable compromise and pretend that the only way to fight violence is with more violence.