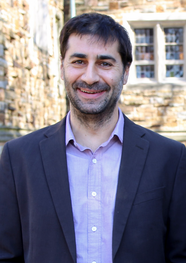 Aram Goudsouzian is the chair of the History Department at the University of Memphis and the editor of the “Sport and Society” series published by the University of Illinois Press. His books include Down to the Crossroads: Civil Rights, Black Power, and the Meredith March Against Fear (Farrar, Straus, and Giroux, 2014), King of the Court: Bill Russell and the Basketball Revolution (University of California Press, 2010), Sidney Poitier: Man, Actor, Icon (University of North Carolina Press, 2004), and The Hurricane of 1938 (Commonwealth Editions, 2004). Aram’s latest book is The Men and the Moment: The Election of 1968 and the Rise of Partisan Politics in America (University of North Carolina Press, 2019).

I’m just now emerging from underneath a pile of books nominated for the annual award given by my university’s Benjamin L. Hooks Institute for Social Change. The award goes to a non-fiction book, published in the previous year, “that best furthers understanding of the American Civil Rights Movement and its legacy.” It is my turn as committee chair, which means that I sift the nominees down to five finalists – a job that is both enjoyable and excruciating. On one hand, I get to lean back and read lots of great new books. On the other hand, I feel wracked with guilt when eliminating some quality books by great historians.

Our five finalists, however, are terrific: Keisha Blain, Set the World on Fire: Black Nationalist Women and the Global Struggle for Freedom (Pennsylvania); Mary Schmidt Campbell, An American Odyssey: The Life and Work of Romare Bearden (Oxford); Elliott J. Gorn, Let the People See: The Story of Emmett Till (Oxford); Wil Haygood, Tigerland: 1968-1969: A City Divided, a Nation Torn Apart, and a Magical Season of Healing (Knopf); and David Margolick, The Promise and the Dream: The Untold Story of Martin Luther King, Jr., and Robert F. Kennedy (Rosetta).

No book had a more profound impact on me than Parting the Waters, the first volume in Taylor Branch’s “America in the King Years” trilogy. Spanning from the Montgomery Bus Boycott of the mid-1950s through the Birmingham Campaign of the early 1960s, it not only traces the rise of Martin Luther King, but also sheds light on various corners of American politics, from the Oval Office to the Mississippi Delta. It is a model for how to write narrative history. Crafted on an epic scale, it is nevertheless grounded in humanity.

When I graduated from college, I worked as a customer service representative for a mutual fund company. That job sounds about as soul-deadening as it is. But I had no idea what to do with my life. Once removed from academic life, however, I realized how much I loved the world of ideas and books. So I applied for graduate school.

But history as a career? That always seemed like a longshot. I got rejected from so many graduate programs, both for my MA and Ph.D., and spent many futile years on the academic job market. I chose history for a career, but it wasn’t clear if history would choose me back!

You can answer this question a hundred different ways. There are intellectual traits such as curiosity and logic, practical skills such as organizing and writing, and humane principles such as compassion and empathy. For me, though, nothing is more important than taking satisfaction in the process. I find it important to define small goals and then achieve them – whether that is learning a body of literature, plowing through another reel of microfilm, or churning out a few good pages. There’s no secret to writing books. It just takes time. Lots of time. One way or another, you have to embrace each hour.

Mr. Walsh, who taught my U.S. history class in high school, was a huge man who somewhat resembled a walrus. The rumor was that he moonlighted as a bartender, which seemed really cool to a dorky teenager. And he had a gift for teaching. He would get so emotional when discussing historical events, and he continually forced us to think in more complex terms. For our assignments, he would give us photocopied excerpts from books by major scholars and have us write on big historiographical questions such as “New Deal: Evolution or Revolution?” Much later, I appreciated how he made us think like historians.

In the fall of 2017, I taught a course called “Memphis and the Movement,” which sought to provide a longer, more contextualized account of our city’s black freedom movement, especially since we were about to observe the 50th anniversary of the Memphis sanitation strike and Martin Luther King assassination. With students from both History and Journalism, it was a diverse bunch in terms of race, gender, age, and background. What a class! It was full of creative tension, with both intellectual analyses of our reading and passionate discussions about its meaning. Because it was our own city’s history, it was often raw and personal. We had many guest speakers, including historians and journalists with particular areas of expertise in Memphis history. For their final project, the students analyzed oral histories from the Memphis Search for Meaning Collection, an extraordinary resource in our own Special Collections.

Many of those students then took a Spring 2018 course in Journalism called “Reporting Social Justice,” interviewing the city’s activists from the past and present. Those interviews, in turn, lent the foundation for a documentary film directed by Journalism professors Roxane Coche and Joe Hayden, entitled Once More at the River: From MLK to BLM.

Survival. The larger forces in higher education – an emphasis on professional degrees, a financial dependence on the business community, state funding models that reward shortcuts to student graduation – are threatening to erode the central place of the humanities in the college experience. I have spent the past six years as department chair with model scholar-teachers for colleagues and a supportive dean. We have extraordinary advisers and a terrific in-house tutoring center. We do energetic community outreach and directly seek out history majors. For all these successes, though, we are battling to keep the humanities at the core of the college experience.

If there are two kinds of book owners, and one kind is the type that keeps the book in mint condition, then I am the other kind. I check off passages, write questions in them, and leave myself reminders. So I’m no book collector. I guess I’m more of a book abuser.

As much as I like teaching and love mentoring graduate students, the most personally rewarding aspect of my career has been writing books. The challenge is so appealing: telling a story, crafting a world around it, and rendering it in human terms. And now that I am firmly ensconced in middle age, I tend to associate each book with a distinct phase in my life; they take on layers of personal meaning in that way.

The most frustrating aspect has been serving as department chair. My term ends this year, however. Soon I can stop solving problems and start causing them!

The historiography has certainly evolved in the fields that I write about, such as the civil rights movement, post-war U.S. politics, and sports history. Nothing has changed more, however, than the teaching of history. We have so many pedagogical tools now, both theoretical and practical, that help get our studentsdoinghistory, rather than just learning it.

I did, once, sort-of come up with a history slogan. About five years ago I yanked my car to the side of the road, because I’d just seen a billboard advertising the University of Memphis that said, “DON’T STUDY HISTORY. MAKE IT!” I went rather bananas. Soon I was writing rage-filled emails to every administrator in the university. Our very calm and reasonable university president called me to suggest an alternative.

A few days later, the billboard read, “STUDY HISTORY. THEN MAKE IT!” Cheesy, I know, but better than the alternative.

I just finished a short book about the presidential election of 1968, called The Men and the Moment, that will be out in April. For my next project, I hope to write a big narrative history of American sports. I think it can be a way to tell a story that courses along the broad contours of the nation’s history, while grounded in the personal triumphs and struggles of a diverse set of characters.